Your Neighbor: Reaching the Summit — Education, dedication pay off for Tarrah Hunter 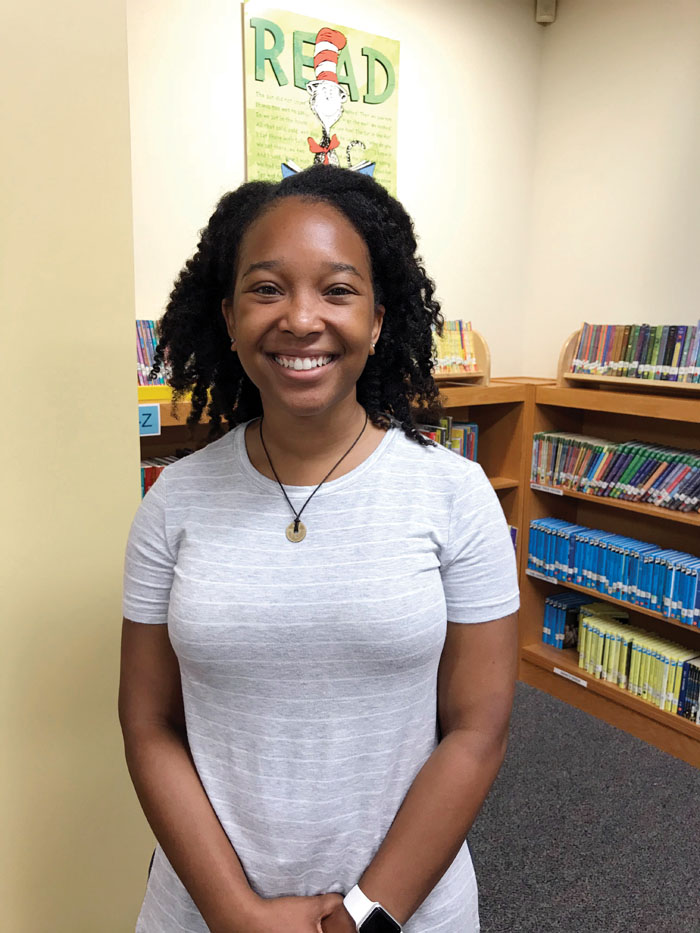 Tarrah Hunter was the first person from her family to receive a four-year college degree. As exalting as that was, she says conquering her goals did not come without struggles. “I stayed on campus all four years because I couldn’t afford to live off. My meal plan was based off of my housing,” says Tarrah. For her, this basically meant eating in the tight quarters of a dorm room. Nonetheless, Tarrah was not only determined to make the most of her academic career, she wanted to make a difference in the lives of others.

Originally, Tarrah did not think college was an option. Her counselor at West Forsyth High School thought differently. Tarrah was in AP classes and had a great grade point average. Tarrah’s adviser told the young student that college was a must. “My guidance counselor told me I was too smart not to go to college. That really stuck with me because I had three other siblings and no one received a four-year degree.” Tarrah knew if she wanted to go to college, she would have to pay for it. At first, she went to Campbell University. “It’s a private school, so it was incredibly expensive,” notes Tarrah. “So, I transferred to Western Carolina and majored in anthropology.”

She started taking classes such as forensics anthropology, archaeology and cultural anthropology. “At this point, I thought I would be a forensic scientist. I took anatomy and biology. But cultural anthropology stuck with me. It is the study of people and what makes society work — the aspects of food, weather, how relationships are formed,” explains Tarrah. “That is what I was interested in. I thought I could make the world better.”

In March of her sophomore year, Tarrah met a young man named, Anthony. “He would try to walk me to my dorm and I was like, ‘No. I’m completely capable of walking myself to my dorm.’” But by the end of the semester, the two kept running into each other. The two began dating and Anthony soon saw how driven his girlfriend was. He liked her aspirations and encouraged them. The two married last August.

As it turned out, college was fruitful and character-developing in many other ways Tarrah didn’t anticipate. It was during her junior year of college that she found herself very interested in South American culture and African-American literature. “I felt like I never got enough of that in my education before college. I had been to Mexico three times with my family and so that interested me.”

Another interest Tarrah developed during her years in college was art. She found it to be a great stress relief and ended up minoring in it. Along the way, Tarrah was also honing some leadership skills. By senior year, she was president of the anthropology club and secretary of the sociology club. She made dean’s list throughout her entire college career. She believes her desire to do well came from truly valuing her education and not taking it for granted. When it came time to graduate, Tarrah was excited.

“Then, I found out I had to pay for graduation. I knew I had to rent my cap and gown, but I didn’t know there was a graduation fee.” Instead of asking for money, Tarrah earned the money on her own. The dean’s list student took a job at Walmart. “I think responsibility has always been at my core. I always try my best.”

Tarrah also discovered she had a natural love of kids when she set out to make money babysitting and accepting a nanny position. She would get the children to school in the mornings, pick them up afterwards and cook dinner. Tarrah would clean up during the day, not because it was required of her, but because she wanted to be helpful.

After college, Tarrah worked at the Montessori School in Winston-Salem. At first, she started out by substitute teaching and working at the camps. After a time, her good work was noticed and she was approached about going through the Montessori training program. In return, she would be required to sign a five-to-seven-year contract. “I was twenty-four. It was a big commitment for me.” However, Tarrah had also applied for a job at Summit School as the afterschool lead and a third-grade assistant. “Summit offered to match what Montessori offered to pay me. That’s when I thought, ‘Oh my gosh. People value me.’ That was a great feeling. I know that sounds simple. But it meant a lot,” says Tarrah.

Ultimately, Tarrah chose to go to work at Summit. “I want to help society and our population — not just low-income families, but there are always improvements that can be made in all walks of life. To have a positive impact on my community, is my goal. At the end of the day, that’s what I want to do. It is vague and general, but I want to help my community. I like to help kids get through a long day and help them read. That is important to me,” says Tarrah who is currently the first-grade assistant and lead after-school instructor. “It’s not just about education, reading and writing — it’s about relationships.”