New chamber director knows the importance of being involved in community 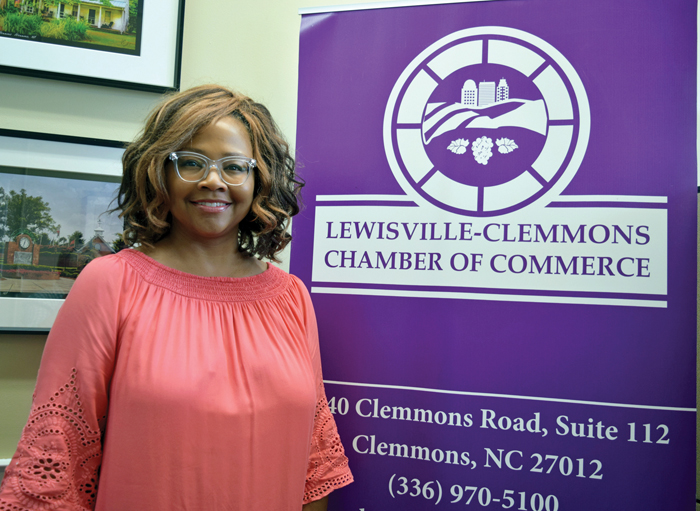 Ditra Miller, the new director for the Lewisville-Chamber of Commerce, knows what it means to be invested in one’s community — the importance of participation to ensure growth and stability. It’s a lesson she learned after attending a conference in Atlanta a number of years ago.

“One of the speakers urged us to go home and find ways to really become involved in our communities,” Miller said. Fortunately, her professional career up to that point had made her especially qualified to answer that call.

A native of High Point, Miller said she hadn’t planned on attending college, but was talked into it by friends. A year after graduating high school, she enrolled at Guilford College. After one year, she left school to get back into the workforce and took a job with Lowe’s Home Improvement.

“I started as a part-time cashier and moved up into management,” she explained. “It was then that I decided to go back to school and earned a degree in accounting.” Her first job after graduation was with a furniture importer in Jamestown.

Along the way, Miller joined Toastmasters International, and that was the beginning of an entirely new journey. At one point she was serving as the organization’s vice president in charge of public relations and putting together an event that would allow potential candidates for local government to meet the public and to answer questions.

“I invited the media to attend and it was at that point I realized how much I loved the public relations end of the job,” she said.

After 12 years in the furniture business, she decided to start her own public relations and web design company.

“I was energized by the idea of being able to share with the public information they needed, ideas and information that could change lives,” she explained.

Web designing was still a new concept at the time. “Most people still believed in relying on Yellow Pages, print advertisement and word-of-mouth.” Miller said she was talked into joining a web design company, where they were selling templates.

“I enjoyed it, and decided I wanted to take it beyond templates. I wanted to do my own designs.” She started reading everything she could find on web design and taught herself what she needed to know. “I started designing websites for nonprofits and small businesses.”

Then she traveled to Atlanta with a group from her church and the idea of making a real commitment to one’s community was embedded.

“I came home and started visiting websites for local governments and making contact,” Miller said. “About two weeks later I was asked to join the Guilford County Board of Adjustment.”

That led to volunteering for other organizations and the discovery that there were many opportunities for people to get involved if they just looked.

One of her involvements was with Innovate GSO – a group established to help small businesses grow and become stabilized within a community. This was a fortunate connection because when Miller recently learned about an opening with the Lewisville-Clemmons Chamber of Commerce, she felt her qualifications justified putting her name in the ring.

The Chamber’s Board agreed and she became the new director in mid-July.

“This is an exciting place to be because the chamber is growing and making a difference in the community,” Miller said. The Lewisville-Clemmons Chamber celebrated its 10th anniversary last year and there has been significant growth in just the last two years. Today, there are almost 300 members.

“We have our monthly chamber lunch meetings here at the Broyhill, but there are also smaller networking groups that meet weekly at various locations,” Miller added. There are several membership levels for nonprofits, regular members and corporate sponsors.

Miller said one of the big advantages as she steps into this new role is the fact that the former director, Ginny Chase, will still be part of the team. “Ginny has been with the chamber for more than five years, and while she’s moving to a part-time position now, she provides a wealth of knowledge, experience and passion that will be invaluable to me. We are all a team, working together toward the growth of our business community. We want to see the existing business continue to be successful and to continue to attract new ones to increase our tax base. We want to all be supportive of one another.”

One of her first projects will be to tackle something the board has felt was needed for a while now. “I want to begin working on a strategic plan for the chamber for the next 10 years,” Miller said. This sort of planning is something she’s done and she hopes that the work will begin shortly.

“I’m very glad to be here and look forward to the opportunities that lie ahead.”

In a letter to the chamber’s membership, President John Golden explained that the organization’s growth called for a more balanced approach to running the day-to-day business. He said the director at the time, Chase, encouraged the board to hire a new director, which would allow her to concentrate on communications. Golden said after much consideration, the board agreed, and after putting together the job description, reviewed more than 40 applicants and conduced multiple rounds of interviews before making the offer to Miller.

Golden cited the fact that she has more than 17 years of administrative and customer service work, owns her own business, is an active member of Toastmasters International and the Society of Professional Journalists. She also is working to complete a nonprofit management certification from Duke University.

The chamber’s office is located in the Broyhill Building on Clemmons Road.

After the final bell: Sophomore Avery Browning is passionate…