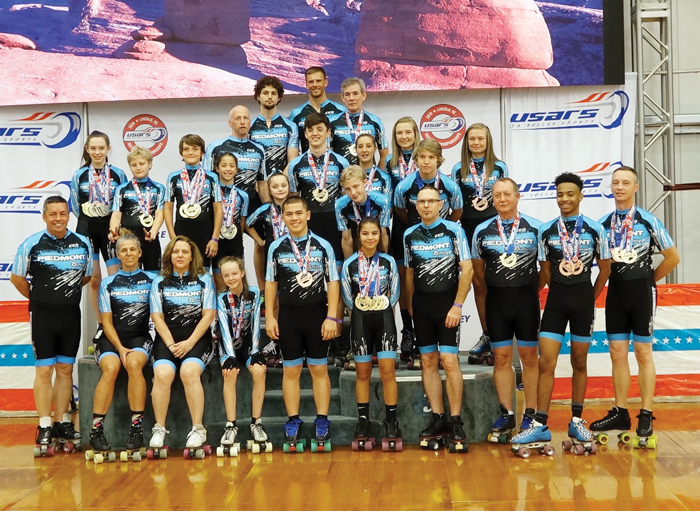 The Clemmons contingent of Piedmont Speed team that is based at Skateland recently competed in the national championship. Everyone won at least one medal.

C.C. Hill wasn’t quite sure what to expect when he loaded up a van full of 11 people of varying ages to head to Lincoln, Nebraska, for the USA Roller Sports Speed Skating National Championships recently.

“They had never been in a skating competition before and the first time they were going to see a competition was at the National Championship,” said Hill, the coach of the Clemmons contingent of Piedmont Speed team that is based at Skateland. “And everyone we took with us received at least one medal in quad skating. Some of them dominated. It was a little overwhelming for some of them with all the jitters and nervousness they had to work through to come out the way they did. I couldn’t be prouder of them.”

What they did was win a combined 35 medals — including 16 gold — as well as 11 John Wintz team awards for their accomplishments.

Hill, the manager of the Clemmons Skateland, wasn’t just a coach at the competition. He laced up his skates, too, and brought home six medals (two gold) in his events and six John Wintz Coaching Awards.

“I was sitting around the other night looking at the medals and the awards and just got to thinking of what we accomplished and realizing that it took a long time to bring most of the kids we took from nothing to national champions,” Hill said. “We’re really proud of that. I love bragging on them. Some of these kids couldn’t skate at all when they first started coming here and now look at them. They are all great kids.”

“They were our two superstars,” Hill said. “They really just dominated their events. Nick has always been super-fast since he started coming. But we had a great showing from everyone who was there. It was just a lot of special moments. When you keep getting called up to the podium for hearing one of your skaters’ names, that’s really special.”

“It was a 20-hour, 1,200-mile drive one way,” Hill said. “Some of these kids had never left the state before. Some may have never left Clemmons. We saw a lot of corn fields and soy bean fields along the way but also got to pass by the stadiums the Kansas City Chiefs and Royals play in, as well as the Gateway Arch in Saint Louis.”

Hill said they started training and raising money for the National Championships about six months ago.

“One hundred percent of the money that we raised went to fund the trip for these kids,” he said. “We held several Skate Night fundraisers and we set up a GoFundMe page. We had several very nice and generous people who found out about it and reached out to help us and we can’t thank them enough. We are already talking about next year, when it will be in Seattle. We want to take these kids that won bronze and turn them into gold, and for our gold medal folks to stay there.”

Hill said that there is more to the program than teaching the kids how to skate fast.

“I’ve basically been around skating all of my life,” he said. “My father did it. My uncles did it. And I’m trying to teach them some of the things I learned from skating, like responsibility and respect, how to be good adults, developing a work ethic. I think we’re building a nice community again and for as long as I’ve been a part of this business, I’ve seen it come and go. We want to be a place, an organization where kids can come and be a part of something special. And now that we’ve started competing, I’m looking forward to seeing where we can go with it.”