Under the sea: Lewisville Parks and Rec sponsoring ‘The Little Mermaid’ musical 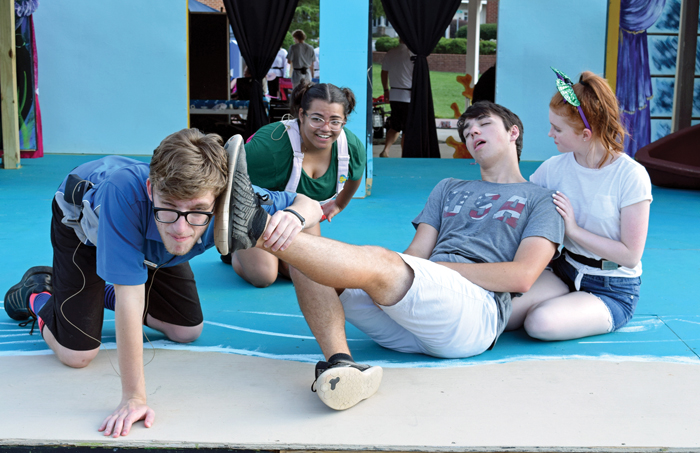 With all of the rain in the Triad recently, it’s no wonder that Shallowford Square is now inhabited by a myriad of sea creatures. From jellyfish to crabs to mermaids, this colorful assortment definitely merits a trip to downtown Lewisville, especially if you happen to be a musical theater fan.

The Town of Lewisville’s Parks, Recreation & Cultural Development Department is sponsoring the Disney musical “The Little Mermaid” for two weekends, Aug. 3-5 and 10-12.

The shows begin at 8 p.m. each evening and all you have to do is bring a lawn chair.

The musical is produced by Melissa Peller and Visualize Consulting and directed by Steffanie Vaughan. Vaughan has directed a number of the shows at the Square, the most recent being “Tarzan” two summers ago.

“I’m such a Disney fan,” Vaughan said, “and I’ve always loved ‘The Little Mermaid’ from the Hans Christian Anderson story to the Disney movie. After seeing the response we received when we staged ‘Tarzan,’ I really wanted to do another big show like that one.”

It isn’t easy creating an underwater show on dry land, which was one of the challenges of staging this show. “On Broadway and in the touring companies, they fly Ariel to create the illusion that she’s swimming. We can’t do that of course so we have to look at other options, like costuming.” Vaughan explained.

Another challenge with this show is the large number of scenes. “That means we are constantly standing locations, and on a stationary set, we have to figure out how to make that happen with little things,” the director added.

While those are challenging, the biggest hurdle may be the audience’s expectations. “This movie has been around since 1989,” Vaughan noted.  “People know the music and love the characters, and come to the theater expecting to see the movie,” she said. “What we have to do is balance the story they know with your interpretation as the director. Sometimes that can be a little confining, but at the end of the day, the most important thing is to tell the story and entertain those who come to see the show.”

One of the reasons Vaughan is especially happy with the production of this show is the quality of the cast. Vivian Waye plays “Ariel” and Vaughan said she’s perfect for the part. “She has the look and personality that meet my expectations of the character. She has the spontaneity, the fire and the innocence, not to mention a wonderful voice.”

Vaughan said she is pleased with the entire cast and how dedicated they’ve been. “This isn’t an easy show. Our choreographer Shaliah Haith-Ince is excellent and the dances she has created are perfect, but also demanding.  The cast members have embraced the process and stepped up to the challenge.”

Haith-Ince also choreographed the production of ‘Tarzan’ in the Square.

Music director Rick Hendricks is making his debut in Lewisville with this production and Vaughan said he’s been a major asset. “He is a perfectionist like Liah, and asks a lot of the cast members, but again, they’ve proven themselves up to the challenge. Both Liah and Rick really bring out the best in everyone.”

Vaughan said casting the leads is often the easiest task, while finding a great ensemble can be more difficult. “I am particularly pleased with how talented this group of actors are and how hard they have been willing to work.”

Another main role, that of “Prince Eric,” is played by Tyler Zichmund. Tyler returns to the Square having last appeared in the town’s production of ‘The Secret Garden,’ also directed by Vaughan.

Vaughan said the weather has not been very cooperative during rehearsals, but that she hopes there will be good weather for the show. “The cast has worked so hard and they need to be able to perform in front of an audience. This is a great family show with comedy on all levels, and I really think people are going to enjoy it.”

If there is a rained-out performance the first weekend, a Thursday night (Aug. 9), show will be added to the schedule. Please check the town’s website www.lewisvillenc.net for information.