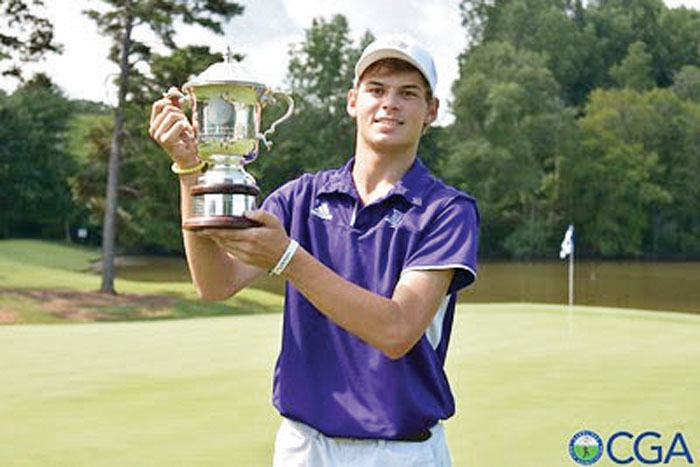 Brandon Einstein gets his second CGA win of the summer at the 9th N.C. Match Play Championship.

No. 10 seed Brandon Einstein of Clemmons is the ninth North Carolina Match Play champion. Einstein defeated No. 1 seed Carson Ownbey of Candler 2 and 1 in the final match Sunday at the Gaston Country Club in Gastonia.
Einstein did not lead the match until the 16th hole, but kept it close throughout the round, never falling back more than one down.
An errant tee shot on No. 16 looked as though it might be costly for Einstein but a sensational approach shot from the left-side rough set up a 10-foot birdie putt that he would make to take the lead one up.
Ownbey won medalist honors and had been sharp all week, but it was his turn to make a rare mistake off the tee on No. 17. His drive put him behind a tree on the left side and left him with a difficult approach while Einstein comfortably made it on the green in two. Ownbey would get to the edge of the green, but went on to three-putt for bogey as Einstein made his par to secure the title.
Einstein said, “He would win a hole, I would win a hole, he would win a hole, I would win a hole, it was all about staying focused really.”
Yesterday, Einstein said his struggles off the tee forced him to use three-wood on most holes, but today he was much more accurate all around the board.
“Just hitting those fairways and greens,” said the incoming freshman at High Point University, “Making a bunch of pars always comes up big.”
Einstein said he made sure to keep a level head and “stay in my own lane” throughout the match.
Einstein certainly made sure to acknowledge the challenge that Ownbey put up and recognize the friendship they have formed over the years.
“We were just being buddies out there. It kept us relaxed and calm and I didn’t get too tensed up,” added Einstein.
Einstein is headed to Pebble Beach Golf Links next week to partake in the U.S. Amateur Championship and he said that this win gives him a huge confidence boost going into the prestigious tournament.
As for what it means to him to win the North Carolina Match Play Championship, he was caught speechless.
“I can’t really think of it. It’s just awesome.”