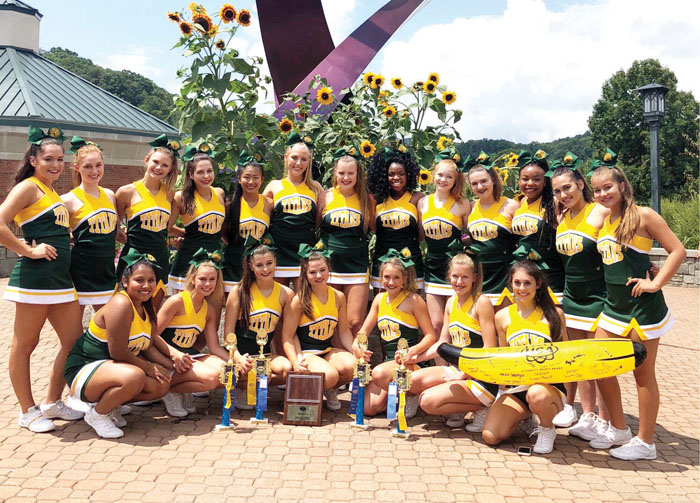 West Forsyth High School cheerleaders are really putting their best pom-pom forward. At Appalachian State University, the girls dominated cheer camp. They trained and competed against some top competition. But our Titans proved to be best with their many victories.

“I take great pride each and every time I get to wear my uniform but running onto the mat to perform with 20 of my best friends last weekend was honestly the greatest feeling,” says Captain Alaina Withers. “Thanks to Coach Lori Harper, she has really taught us how much we accomplish by working together as a team.”

Co-captain Sarah Rodgers explains the work the girls had to put into their routines. “Each day we learned new material and worked hard to compete against eight varsity teams our final day. On the final day, we gave it our all as a team and completely swept the competition.”

It is not surprising the girls did well. Their training schedule is a full-time commitment. As a West Forsyth cheerleader, tryouts are in April. Practice starts immediately after tryouts. During the summer months, practice continues three days a week. During school, they practice three days a week, plus games. “We hope that our football team can keep us under the Friday night lights until December, but when football ends we transition immediately into basketball season. Then, we cheer our men and women into March,” says Captain Emma Conley. “Cheerleading at West Forsyth is a huge time commitment but it’s worth every second.”

The girls say camp is hopefully just a sample of what’s to come this fall. Rodgers says, “Starting the season off with some first-place wins was super exciting as we plan to compete at a higher level in UCA’s National Game Day Division. We will attend the qualifier in November and hope to compete nationally in Orlando after the first of the year.”

Withers adds, “We did not have to leave camp with five first place trophies to prove the bond that we have this year – I can’t wait to spend my last moments of high school with this team.”