Your Neighbor: Coach Ryan Michel is passionate about teaching, athletics 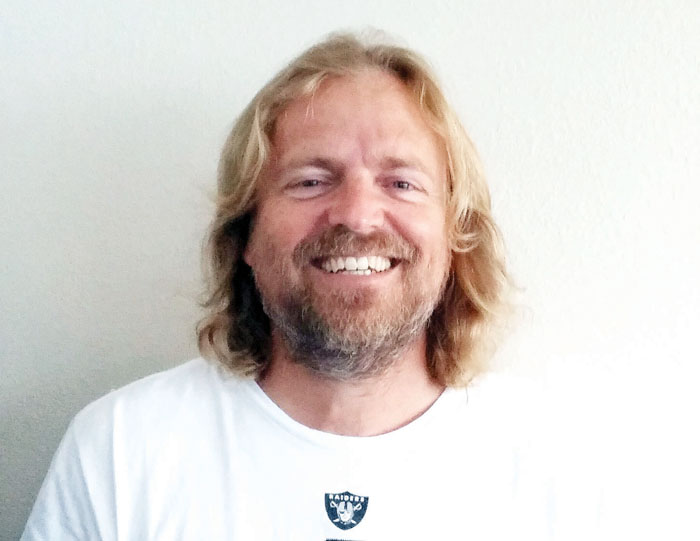 “Athletics have been important in every step of my life,” says Coach Ryan Michel. “My goal as a coach is not just to coach swimming, but train lifelong athletes. I think it leads to a better lifestyle in years to come.” Coaching, however, was not always a part of Ryan’s plan. Granted, he had a very athletic lifestyle while growing up. Ryan was born in Durham. His dad had gone to Duke and his mom had attended the University of North Carolina at Wilmington. Ryan grew up, however, in central California when his dad’s work took them there.

On the west coast, Ryan was at the beach regularly. He also played water polo, tennis and surfed. “My brother was a better surfer, but I was a better at water polo.” At first, however, water polo was not even on Ryan’s radar. Right before his freshman year, some of his buddies encouraged him to join. “It was good for me because there was an emphasis on training and cross training. We did laps, long runs, and weight lifting. It was almost like training for a triathlon before triathlons became popular,” says Ryan. “I still emphasize that type of training in my coaching today.”

Ryan shined in sports. He also shined academically. “My parents always wanted me to come to the east coast for college. They wanted me to go to Duke, but I wanted to go to Wake,” says Ryan. Ultimately, Ryan was accepted at Wake Forest University, where he ended up attending and majoring in chemistry. His goal was to follow his father into the medical field and become a doctor as well. His first year, Ryan was homesick, much like many of his fellow freshmen going through the same period of adjustment away from home. His sophomore year, he decided to apply for a part-time coaching position at what was known then as the WSY Swim Team at the YMCA. Ryan was hooked.

“I wanted a bit more of a challenge; and so I went back to Wake and got my teaching certification, my master’s in education.” Stan Elrod hired Ryan as the head swim team coach and chemistry teacher. “Stan Elrod is a great mentor. He recruited me out of college, put me in a wonderful situation, and set me up for success. Even today, he follows what I am doing and will pick up the phone and ask me how I am doing.” Ryan laughs and says Stan also takes credit for introducing Kathryn to him.

“Stan hired Kathryn and me the same year. New teachers always have to stand up and introduce themselves to the entire staff. As soon as she stood up, I said, ‘That’s going to be my wife.’ ” The two went to a Wake Forest game the next weekend. Soon they were sitting side-by-side on the couch grading papers. Eventually, they got engaged.

In 2005, Ryan was 33. Stan was opening Reagan, a new high school in Pfafftown. He asked Ryan to come along, coach the swim team and head up the science department. Ryan took the job. He ordered all of the new equipment for his department. At home, Kathryn had gone to work part-time while taking care of their son, Simon. Eventually, the couple also had another son, Sam. It has been a busy time for them. Kathryn went back to get her master’s at Wake. She now teaches full-time at the career center.

Some people have wondered why Ryan chose to go into teaching rather than following his original plan. It turns out, it is because of something of great value to him. Time. Time with his family, that is. “The reason we both wanted to be in education,” explains Ryan, “is because we both wanted to have time for the kids. Growing up with my dad as a physician, he wasn’t able to be a part of a lot of sporting events, which is one of his regrets. And I didn’t want that to happen with my boys.” He has been true to his values. Ryan has also coached summer league swimming for years. He says he does it to be with Simon and Sam, and he finds it to be a good fit. “What other sport can you have a 16-year-old and nine-year-old compete in at the same time?”

When asked if his sons were encouraged to take up swimming competitively, Ryan answers, “The only thing I told them to do was summer swimming because I wanted them to be tired,” Ryan laughs. No doubt, he is considering the energy levels children have combined with the time they can have on their hands in the summer. “Whatever they want to do during the year is up to them, but the rule in our house is you have to do one sport a season.” Ryan says this is a requirement because he has seen the benefits of athletics in his life personally and wants to impart that wisdom to his boys. Culling from personal experience, Ryan says his thesis was, “Athletes perform better in season than out of season.” “That’s the way I was. When I was busy and training, I was always more organized in the classroom. When people have free time, they don’t maximize it like they should. When they have a set schedule and expectations, they rise to those expectations.”

It’s not just his own children for whom he has high expectations. His enthusiasm for teaching and coaching is evident. “I have always treated every student athlete just like my own sons.” With those kind of goals and continued passion for teaching, Ryan picked the right career. Many of his students can be thankful he followed what seems to be a calling for him.

Steven King once asked, “If God gives you something you can do, why in God’s name wouldn’t you do it?”  Sounds like our neighbor has done just that.