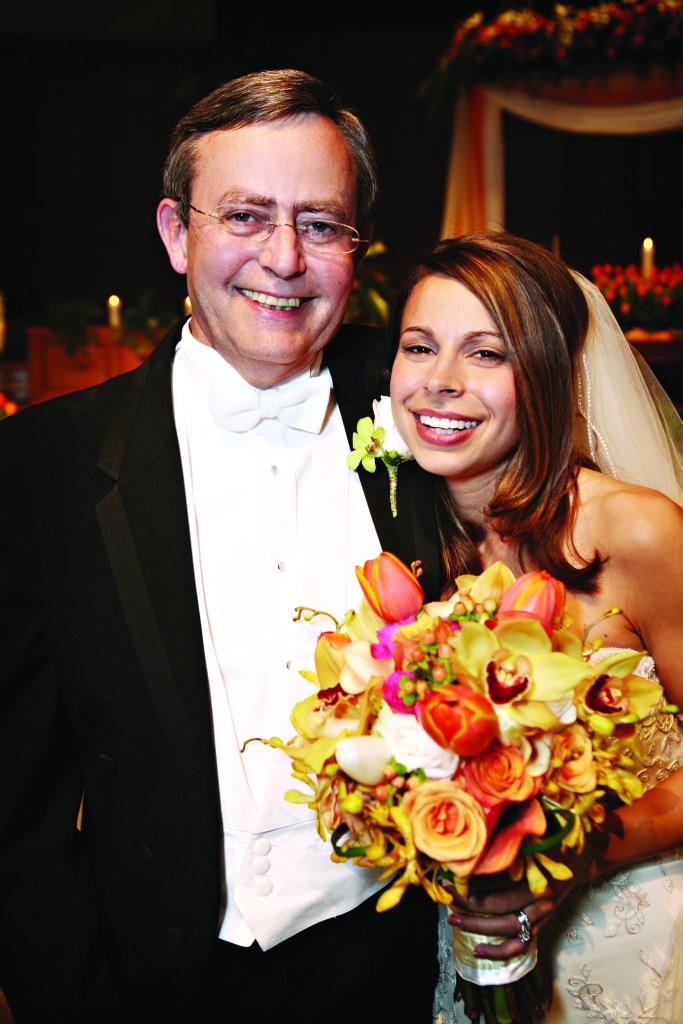 With two extroverted parents and three energetic brothers, Audrey Thompson loved the gregarious and energetic household in which she grew up. A sense of humor went along with it. “They tortured me,” Audrey jokingly says, in reference to her high-energy brothers. She becomes more serious and says, “No, it was really fun. We grew up playing sports and I followed them around. Since my brothers were wild, I felt like I needed to be the good child.” Her parents, Jerry and Charlotte, loved raising their little girl and three boys. “Dad always came home by five and would take us outside and play with us. Mom is so strong. She took care of us all.” Their family was very active in the community. “Dad was a pathologist; they don’t see patients. But he mentored other doctors and nurses. It didn’t matter if you were a janitor or president of the United States, he laid out the red carpet the same for everyone.”

Still, for Audrey, with a father and three brothers looking over her, it might have been daunting to bring home a serious boyfriend, let alone a real contender for her hand. However, Audrey found her would-be husband early on, in high school. He was someone who was shy and had a heart of gold. Audrey’s mother understood perfectly. “I met John Mark at Reynolds. We started dating and I have never dated anyone else. As my mom says, I am like a porpoise. I mate for life,” Audrey giggles. “John Mark has this goodness about him. He is very laid back. He has a faith that is strong and that was important to me. We just worked.”

In college, Audrey came home before graduation and opened her own childcare agency. Parents could drop their kids off for four hours. Audrey wanted to be a back-up for parents who may not have had their kids in preschool yet or an alternative for parents’ whose babysitter had canceled. Audrey called her childcare enterprise Busy Kids. Her interest in children, and what they think and feel, also led her to write a book, “Bug in the Brain.” The inspiration came from a two-year-old boy she was teaching.  One day, he was pretending to see in her head. Audrey asked, “What’s in there? I bet there’s a bug in my brain.” The boy giggled with the silly teacher. Soon after, Audrey wrote, “Bug in the Brain.” The picture book teaches children how our brains are meant to dream big.

Once Audrey and John Mark got married, Audrey realized she wanted to commit her time to her own family. Consequently, she sold her business. John Mark and Audrey’s firstborn was Evy. Anna Kate was next to come along. Both of Audrey’s parents doted on their grandkids. Those parental instincts seem to have been passed down to Audrey and may be exemplified in her beliefs. “No matter what I do for my whole life, my biggest accomplishment will be being the best mother I can be. How I feel validated is if I do a good job raising these kids.”

All in all, life seemed happy for the young mom, until one day Audrey got a phone call. Immediately, Audrey felt like she received a sucker punch in the gut. Her dad, Jerry, suffered a stroke. He was left nearly noncommunicative. Three months later, Jerry suffered another stroke. This time, cancer was found in his pancreas. Jerry spent his last five days in hospice. “The people at hospice in Winston-Salem need to be written about. They are amazing. I will volunteer there one day when I take my time to volunteer. What they did for us meant a lot during that time. It’s a beautiful thing to have people around who want to give you comfort during death.”

When explaining the loss of her father who died two years ago, Audrey says, “Once you experience the loss of someone you love so much, it’s like a sense of home is taken away. The time in my life with when I felt God the most was when Dad died. I think about Dad every day.” Audrey acknowledges that she has made changes since losing her father. First, she moved her family of four in with her mother. “We all drive each other crazy sometimes but it works.” Second, Audrey chose not to have any more children. Her dad met Evy and Anna Kate. She felt content with that. Finally, Audrey says she empathizes even more with those around her. “Other people lose. It makes you appreciate your friends and family. There are other people struggling with worse and it makes you really empathetic to people who have loss. It’s a feeling that is not quite something we understand. But, I learned more empathy for sure.”

When gathering for the anniversary of Jerry’s death, Audrey’s mother Charlotte asked her daughter to write a poem for the occasion. Our neighbor took her pen in hand and elegantly poured her heart out onto the page. Here is the beautiful poem written by our neighbor Audrey Eggers Thompson about her father Gerald Wood Eggers. It is certain to resonate with many of us who have lost someone we love so deeply.

It’s been a year. How could it be? Why did you have to leave?

The absence of you here without us is too hard to conceive.

What hurts the most is that my kids will never get to know,

The man who shaped me most in life, the man who helped me grow.

They’ll never get to snuggle you or get to hold your hand,

but I’ll make sure to let them know you’re still their biggest fan.

Watching up in heaven and cheering all the while,

I’ll teach them lessons you taught me, I hope it makes you smile.

And If I feel your loss too deep, I know just what to do,

I’ll step outside into the woods and take a walk with you.

We’ll go along the peaceful creek just like when you were here,

and suddenly upon my path a feather will appear.

Comfort just to know you are near will brighten up my day.

You let me know you’re still with me, just in a different way.

So when a yellow butterfly soars above the trees,

Or when a deer that just appears brings me to my knees,

and know that death could never stop your love from shining through.