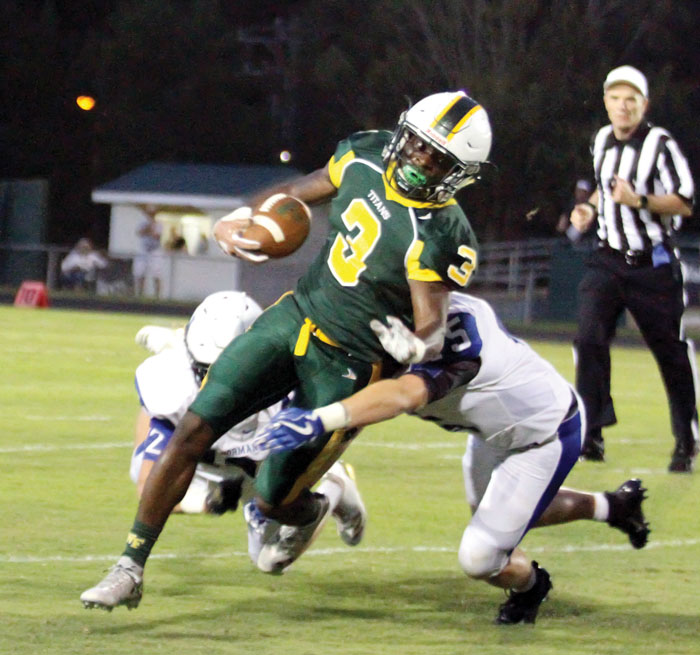 The West Forsyth football team shook off its offseason rust and left visiting Lake Norman in the dust by pulling away for a 26-7 win in the season-opener for both teams on Friday night.

After the Titans allowed a touchdown on Lake Norman’s opening drive, the defense stood firm and held the Wildcats scoreless for the rest of the game.

G’Mone Wilson had two scoring runs in the second quarter and finished the game with 90 yards on 18 carries, all of which came in the first half as the Titans built a 17-7 lead.

The win wasn’t as clean as coach Adrian Snow would have liked — West lost two fumbles and had an interception off a tipped pass attempt deep in Lake Norman territory as well as 10 penalties for 100 yards — but he was more than happy with the end result.

“Overall, a win’s a win and we’ll take it,” Snow said. “It gets us started off on the right foot and that’s the biggest thing. But some of those silly mistakes we made tonight — that’s not West Forsyth football, so there are some things we’ll clean up. We had the ball two times down inside the five (yard line) and didn’t score, and that’s unacceptable. We can’t fumble the football. That’s the only thing — that’s our most prized possession.”

West allowed Lake Norman to drive 80 yards on its opening possession in nine plays, capped off by a 29-yard touchdown pass from Gage Smith to Steven Testa. Landon Milligan’s extra point gave the Wildcats a 7-0 lead, but that was the last time they sniffed the end zone.

The Titans’ opening drive stalled on the 21-yard line and Kaplan’s 41-yard field goal attempt was wide left. But after West held Lake Norman in check on its next series, Ja’Quan McMillian gave the Titans the spark they needed.

McMillian field a punt on the West 12-yard line and followed a wall of blockers up right side of the field and returned the ball to the Lake Norman 17.

Three plays later, Wilson took a sweep around left end and found the end zone from 10-yards out, and Kaplan’s extra point tied the game at 7.

Wilson added a 12-yard touchdown run on West’s next possession, once again finding daylight on a sweep to the left as the Titans took a 14-7 lead.

Kaplan added to the lead with his first 38-yard field goal with 23.3 seconds left in the first half to give West a 17-7 lead.

After allowing 90 yards on the opening drive, the Titans defense buckled down and allowed 63 yards on Lake Norman’s final five possessions of the first half — 35 of which came on a passing play late in the second quarter.

“They came out and threw it around a little bit early and made some plays, and that’s what you have to do,” Snow said. “But we had to respond, and I thought we did that. Our defensive (coaches) did a great job adjusting. They just had to see what they were going to try to do to attack us. Once they see that, they are really good at getting us in the right spots, and that’s a big deal.”

Both Jarvis and Jalen Ferguson saw time at quarterback against Lake Norman, with each rotating series’.

Snow said that rotating the two juniors will continue to happen unless someone distinguishes himself.

“We’re kind of looking for one of them to take the bull by the horns,” Snow said. “We’ll see what happens. For right now, we’ll go with it. From the naked eye, you just can’t tell. You’ve got to analyze it on film.”

Snow and the Titans will now turn their attention to next week’s opponent, Oscar Smith High School, in Chesapeake, Virginia.

Snow said that the team will load up the buses next Saturday morning, go play the game at 4 p.m., and come back late Saturday night.

“It’s a pretty big deal,” Snow said. “This team has lost in the Class 6A state championship the last three years, so they are a really good program. They are a talented bunch and we’ll go and see how we measure up.”