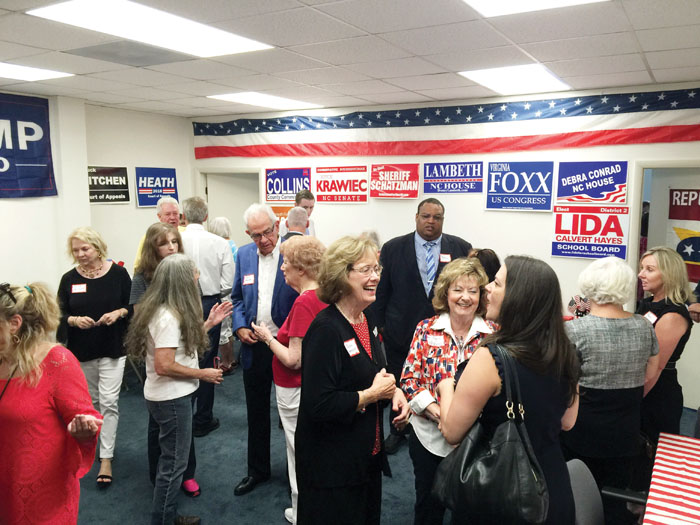 The new GOP office in Clemmons. Photo by Jill Osborn.

Clemmons is now officially the new location of the Forsyth County Grand Old Party. Last Friday, more than 30 enthusiastic supporters were on hand when the Republican party opened its office doors in Room 303 of the Bronze Building on Lewisville-Clemmons Road. In celebration, the walls were festooned with red, white and blue flags and streamers.  Campaign signs for candidates were also decorating the room.

Congresswoman Virginia Foxx, who was also in attendance, said she is delighted to have the headquarters in Clemmons. “It’s in a good spot. There is an elevator, so anyone who cannot go up and down steps can use the elevator,” she said thoughtfully. Looking around the room, she noted, “We have a great turnout for the open house.”

Liesel Comer, a constituent who came to the open house, shared her enthusiasm for her party. “The only thing I can say is, ‘Go, Trump, Go.’ I am German, so I appreciate what he does in America.” Comer came to speak with Congresswoman Foxx and says she is interested in what is going on in the Republican Party. “It makes me proud to have a president who is standing up for America.”

Two local representatives, Clemmons Councilwoman P.J. Lofland and Lewisville Councilwoman Marcia Gallman, were also on hand for the festivities. Councilwoman Lofland had this to say about the new location: “I think it is wonderful to have it in the western part of the county. This is very nice. Forsyth County has expanded and a lot more people live out here. So it’s nice to have the headquarters here for a change. We will have someone here every day from here on out if anyone wants to come by.”

Councilwoman Gallman added, “I came to show my support and — that it gets off to a good start. And really show support for making America great again.”

“We are always looking for volunteers,” says Joann Dunn who is the vice president of communications for the Forsyth Republican Women group. “People can pick up signs and brochures here. They can register to vote here.”

Kevin Dunn, who is the 5th District chairman, notes, “As the campaign amps up, there will be all types of signs. There’s a new energy within the party and I’m glad the headquarters is here to support those who are energized.”

Janet Fortney, who is a member of the Forsyth Republican Women group, agrees. “I think if we want to be victorious at the polls, we have to be visible. We must be open during these key election years.”

The office will be open Monday through Friday from 10 a.m. until 4 p.m.