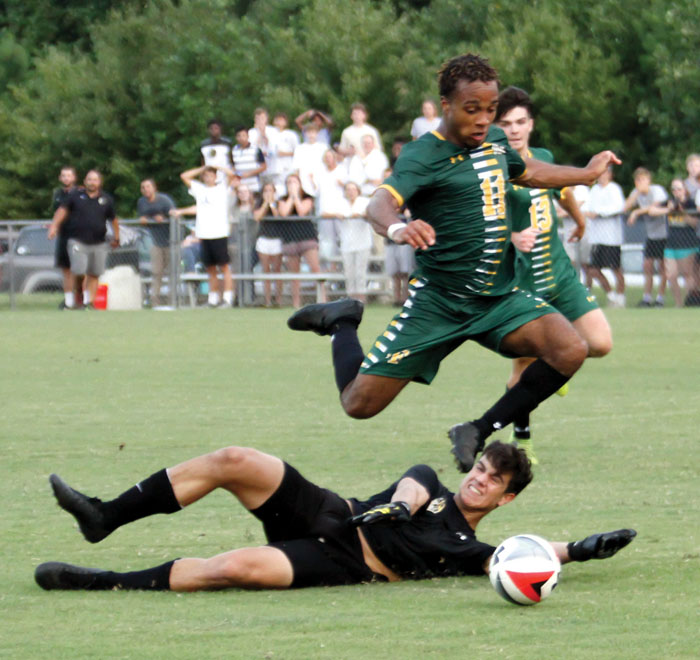 John-John Dickenson beats the Reynolds goalie to the ball during the championship game of the Forsyth Cup.

Practices for fall sports teams began on July 30 at West Forsyth, with most teams starting their regular season game schedules last week. Here are capsules and overviews for the Titans’ varsity teams this season.

Coach Jeffrey Williams enters his fourth season at the helm and ninth overall with the program. West is coming off a 13-9-2 (5-5 Central Piedmont 4A) season but returns five starters and plenty of experience along with its new faces.

Thomas Mazza, a senior goalkeeper, and Bruno Gonzalez a senior outside back, will step into the role of captains this season.

Mason Paschold, a center back, and Tyler Henson, a midfielder, were both all-conference selections last season. Diego Rodriguez and Jay Esposito will also be counted on for bigger roles, as will Ethan Williams, Marcus Stewart and Brandon Setzer.

“We’ve got a good mix of young talent and older talent,” Williams said. “They understand our style and our pace, which is a good thing, because our conference is going to be really tough again this year. Every Tuesday and Thursday night will be a battle.”

The Titans started their season with a bang by winning the Forsyth Cup for the second straight year.

West, the No. 1 seed, defeated Reynolds 3-2 in the championship on Jalen London’s goal in the 78th minute.

The Titans beat North Forsyth 5-0 in the opening round and edged Mount Tabor 1-0 in the semifinals.

Junior John-John Dickenson scored four goals and had one assist during the Forsyth Cup.

The girls’ cross-country team came up just short of winning the NCHSAA 4A state championship last November and finished third in the team standings, and if not for an injury and an untimely illness to two of the top runners, the Titans may have come into the season as defending state champions.

Coach Nathan Newsome returns plenty of talent, including all-state performers Eliza Broce, who finished ninth at the state meet, and Bailey Reutinger who was right behind Broce in 10th. Both will be sophomores this season.

Zavera Basrai is the lone senior on the team and is the No. 3 returning runner from last season, finished 44th in the state meet last season as one of the Titans’ five scoring runners.

Freshmen Taylar White and Kelly Smith emerged from team camp as the No. 6 and No. 7 runners based on time, which gives Newsome plenty of young talent.

“If the freshmen keep improving, I suspect we can be a top five team in the state, maybe even top two,” Newsome said. “Cardinal Gibbons (the defending state champions) will be tough to beat again this year. In our conference, Reagan will be really good and every school has a few great runners in the programs, but I feel confident we can win the city-county (meet), the conference, and the region, barring injury, which we learned about last year, unfortunately.”

Coach Jeff Thompson has been coaching cross country long enough to know where his team stands heading into the season.

“I’ve been doing this about 30 years now,” Thompson said. “And I think that we have a team that should be right there in the mix for the conference championship in October.”

Last year’s team finished 10th in the NCHSAA 4A state meet and return four runners from that team, including junior Will Atkins, who was the top runner at the state championship for the Titans after finishing 24th.

Thompson said that newcomer Cole Meixsell, a sophomore who didn’t run cross country last year but ran indoor and outdoor track, will provide a boost, as will senior Russell Letourneau.

“Reynolds returns a good team from last year and beat us in a race at team camp,” Thompson said. “We feel like we can make it pretty competitive with them and Reagan in the conference.”

There are six returning players for the Titans’ girls golf team, and that gives Coach Jimmy McMullen plenty to be excited about.

“We have a good mix of experience coming back and a great group of freshmen coming up now,” McMullen said. “All of them have focused on developing their skills and dedicated themselves to getting better. I’m really excited and fortunate to be their coach again this year.”

Coach Lauren Gillon (formerly Yacobi) may have a new last name after getting married recently but things will remain the same for the Titans as far as expectations.

“We have seven seniors and three juniors returning this year, so our experience should speak volumes,”  said Gillon, whose team finished 15-12 and made it to the second round of the 4A state tournament. “We also have a lot of really talented younger players. We stand a chance to do fairly well this year, with Reagan and Davie looking like they will be the biggest competition.”

Junior Madie Lichty, an all-conference outside hitter who has already verbally committed to Florida Gulf Coast, is a three-year starter who Gillon said continues to develop as a player.

Shana Krenz enters her fifth season as the Titans’ tennis coach and has a roster of young talent to go along with senior Gwen Lau and junior Leah Harding, who qualified for the 4A state doubles tennis tournament last season.

Lau and fellow senior Emma Osborne will serve as captains for the Titans this season, who will also lean on freshmen Brianna Shillito, who will start the season as the No. 1 singles player and freshman Lauren Kranis, who will be No. 2.

“Of my top six players, only two are returning players,” Krenz said. “But even my newer players have plenty of experience playing. I’m excited to see where the season takes us.”

“We’ve got almost everybody coming back from last year, including two all-state players,” Bryant said.

Delaney Serpan, a senior midfielder, and Kaitlyn Bryant, a senior forward and the coach’s daughter, were the Titans’ all-state selections last season and will be counted on for their scoring and leadership.

“We’re still going to be pretty young, but we really came on strong at the end of last season and won straight games before losing in the state tournament,” Bryant said. “And I think we have a lot of good, younger players who have been playing field hockey at the club level for several years.”

‘He never misses a shot’: Uly Grisette has had…