Your Neighbor: ‘Life is a short-lived opportunity’: Denisha Little-Greene’s faith sustains her in work and family 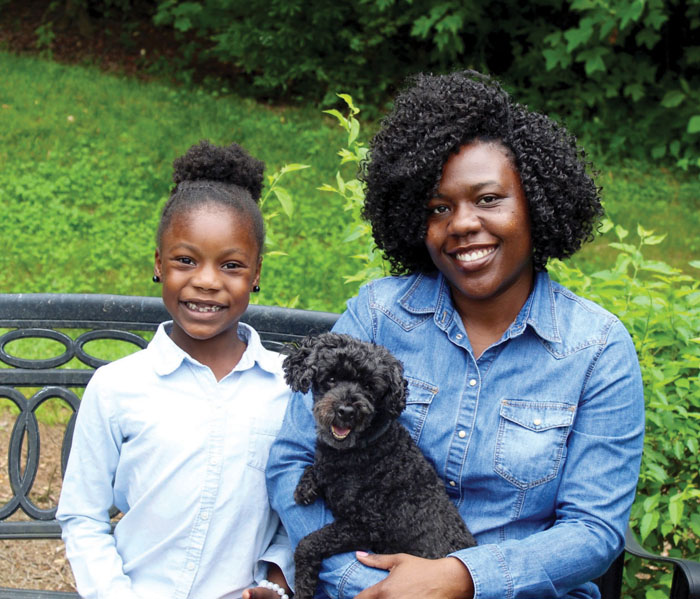 Much like many of the people who grew up in Clemmons, Denisha Little-Greene grew up in a town where neighbors recognized neighbors. People said hello when they passed each other in the aisles of the grocery store in Lilesville. Friends and family sat together in church. Denisha’s father was a deacon at a church that had been important to her family from its inception. When the doors of the church were first opened, Denisha’s great-great grandfather was there. It was a place where the young girl felt as if she knew everyone and everyone knew her.

With such an investment to family and community ties, it is not surprising that Denisha recalls that some of the most influential people in her life were her grandparents. As she was growing up, they helped keep an eye on her. Their presence in her life contributed to her strong foundation and the values she carries with her today. “My grandparents are so much a part of who I am,” says Denisha. “One set of grandparents were farmers. My other grandmother did get a high school diploma, but they always talked about the importance of education.” For Denisha, cooking with her grandmothers was a favorite pastime, as well as growing various vegetables in the garden. “I have each of my grandmothers’ flour sifters on the wall in my kitchen.” Denisha says her parents and grandparents also instilled the importance of treating everyone with dignity. “It did not matter if you were a janitor or CEO, you are nice to everyone.”

Of course, Denisha’s grandparents and parents were proud when Denisha went to Winston-Salem State University and then to Wake Forest University School of Medicine for the physician’s assistant program. Denisha was climbing the educational and professional ladder. However, her reasons for celebration were diluted by some emotionally wrenching experiences. “I went through a pretty difficult divorce. I have always known God. But I got to know God deeper when I was going through my divorce,” says Denisha.

That wouldn’t be the only tough challenge in store for Denisha. “While going through my divorce, my mom became critically ill.” Having gone through medical school, Denisha knew what questions to ask her mother. Denisha remembers one Tuesday in particular. She said her mom went to the doctor and was being treated for a sinus infection. On Wednesday, when Denisha’s mom was asked how she was feeling, she said she had fallen and was really tired. “Falling? That’s when I called my dad and told him to take her to the hospital.” The doctor said it was the flu, maybe pneumonia. “By Friday, the doctor said he didn’t know if she was going to make it. He wanted to fly her to Charlotte’s hospital.” Denisha said by the time she saw her mom, it was shocking. “I didn’t recognize her. Her body was nonresponsive.”

The family was advised that Denisha’s mother should go on ECMO. ECMO stands for Extracorporeal Membrane Oxygenation. Essentially, it involves a machine that pumps blood in and out of the body in order to give the heart and lungs a rest. There are risks with ECMO, including bleeding, infection, transfusion problems and possible stroke. Ultimately, Denisha believed it was her mother’s best shot at surviving, though odds looked low. “I drove down to Charlotte and spent nights in the hospital. Then I would drive back to work at Baptist. God showed himself very faithful during that season.” Denisha pauses and adds, “My parents have this earth-shattering faith. My dad kept saying, ‘She’ll be fine.’” Denisha brought her daughter, Audrey, in to see her Nama and to pray over her together.

Then, one day, Denisha’s mother began to show signs of improvement. The doctor decided to take Denisha’s mother off of the ECMO. Day by day, a miracle began to reveal itself. Denisha’s mother survived.  Today, she has gained back 100 percent of her health that she enjoyed before her illness. “She does everything like she did before. Everything. She is a miracle. Audrey says she knows miracles can happen because God brought back her Nama.”

Perhaps it is Denisha’s strong faith that allows her to carry on in what can be a somber profession. As a physician’s assistant and project manager, Denisha does clinical research in adolescent and young adult oncology for the Wake Forest School of Medicine. She tends to patients from the ages of 15 to 39.  As one might expect, what Denisha sees everyday influences her perspective and understanding of what critically ill people might be going through for the first time in their lives. “Society doesn’t always think about the pressure they bear. The patients have usually never had a life-threatening illness occur and are trying to get ready for the SATs or have just had their first child,” says Denisha.

As a result, Denisha tries to remember to live life in a positive way. “I also really look for strength from God at work. I try to be very intentional. If that is speaking to the cashier and asking, ‘How you are doing?’ — your hello can brighten their day. Life is a short-lived opportunity.”

Naturally, Denisha is passing along some of these values to her daughter. Denisha and Audrey take food to sick friends. They are members of Jack and Jill, a program that teaches about the importance of community service. “I watched my parents treat everyone with integrity. They grew up in an age and time when it was very divided racially. I know they walked through challenges as African Americans, but I never saw that. They always instilled in me — you do what’s right, you treat all people right, and you walk in honor.” Such wise words from our neighbor. Do what’s right. Treat all people right. Walk in honor.