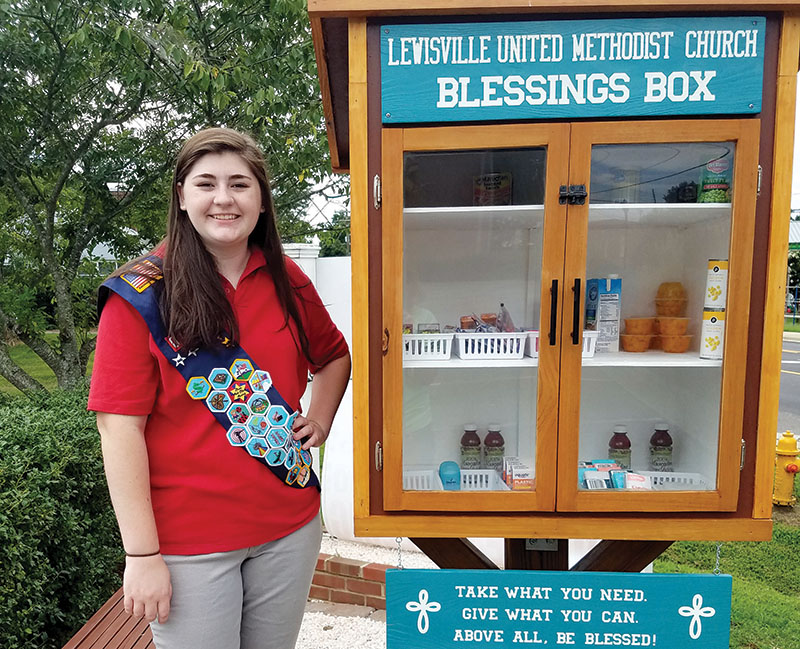 Mary Grace Watkins, a rising senior at West Forsyth High School, has planned and built a “Blessings Box,” a receptacle for people in need to take basic necessities. Submitted photo.

Mary Grace Watkins, a rising senior at West Forsyth High School, is a caring and compassionate teenager who is mature beyond her years. These qualities have served her well as she has worked to complete an impressive service project to serve needy individuals in the community. The project, which she calls a “Blessings Box,” is the final step toward completing the Stars and Stripes Award, the highest honor given to a member of the American Heritage Girls Scouts. This award is the equivalent to the Eagle Scout Award that is given to a Boy Scout.

The idea for her project was passed long to her by her father, Jeff Watkins. The family’s pastor, Susan Ewing, had presented the idea to Jeff as a possible project to be considered for Boy Scouts in his troop where he is a leader. He liked the idea enough to have his daughter consider it for her project. The idea for Mary Grace’s project was born, and she has worked hard to organize, plan and complete it.

The box is a large wooden structure that is located at Lewisville United Methodist Church where the Watkins family are members. It contains basic necessities for needy individuals in the community such as ponchos, toothpaste, deodorant and basic food items such as granola bars. The items are offered on an honor system with a message on the box that reads, “Take what you need, give what you can, above all be blessed.”

The project has involved months of planning that began back in January. Mary Grace first had to gain approval from her church, and then she organized a fundraiser for the construction of the box and for the first stock of supplies. The fundraising event was a chicken and waffle dinner that took place on July 8. It successfully raised about $1,300 of which $400 was spent on costs for the dinner, $800 for the construction of the box, and $100 toward the first items that were supplied for the box.

Although the Blessings Box has only been recently completed, it has already served many individuals. Mary Grace has organized a schedule where the Sunday School classes at her church have been challenged with bringing items to restock the box on a rotating basis. It was recently restocked in late July. Although folks who attend her church have been bringing items for the box, anyone from the community can donate food and supplies to keep the Blessings Box stocked and supplied.   Lewisville United Methodist Church, where the box is located, is at 6290 Shallowford Road.

As one might expect, Mary Grace’s parents, Sarah and Jeff Watkins, are extremely proud of their daughter and her altruistic traits that led to the Blessings Box project. They summarized their thoughts regarding her with this comment: “Mary Grace has been in the American Heritage Girls since she was in the sixth grade. It was a goal of hers from the time that she joined that she wanted to earn the rank of Stars and Stripes. Once she was approached with the idea of the Blessings Box, she loved the idea of helping so many people and ran with it. We are so very proud of her, not only for setting her sights on a goal, but for wanting to make a difference to all those who encounter it, whether they are giving or receiving, and that in itself is the greatest blessing of all.”

Mary Grace has accomplished two things with the completion of her service project this summer.  In addition to completing the last step toward earning the Stars and Stripes Award, more importantly, the Blessings Box will serve individuals who will benefit from it for a long time.

In addition to her role in the Girl Scouts, Mary Grace is active in her church youth group. She also directs a dance group called “Leaps of Faith.” She has also worked for the last two years at Kumon Learning Center where she has been tutoring young students in math and reading.

When I asked her about her plans after she completes her last year in high school, she remarked that she plans to major in elementary education with a minor in special education. It is no surprise that this impressive young lady is considering a career path where she can use her talents and compassion for others to inspire young people to pursue their dreams.

If you know a young person in our community who has made a significant impact on their school or in the community, please email me at LKStom@aol.com for consideration for a story in a future edition of After the Final Bell.

Get ready to rock the bald: Davie Construction hosting…