‘Put herself on the back burner’: She’s her sister’s keeper, with help from Clemmons hospital and local surgeon 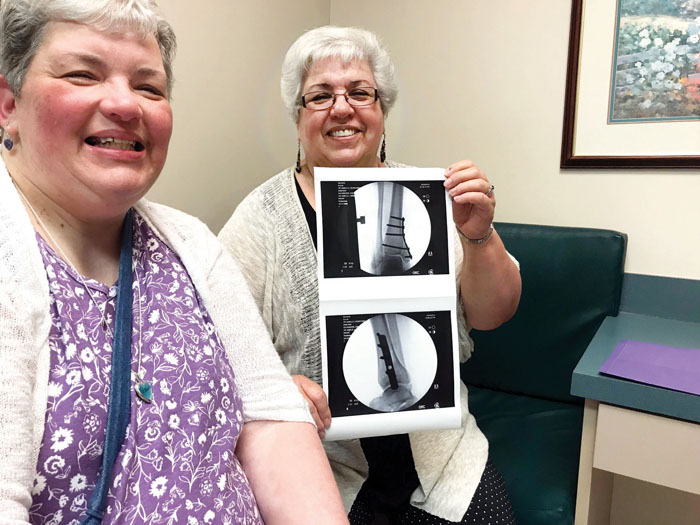 Mickey Sprinkle, right, recently had ankle surgery. She is the caregiver of her sister, Tina Belton, left.

Mickey Sprinkle should have known her ankle was a big problem when September 2017 rolled around and she had to skip the Dixie Classic Fair.

Every year, she looks forward to sharing the joy of the event with her 51-year-old “baby” sister, Tina Belton, who uses a wheelchair. Sprinkle threads her sister through the crowds and loves watching her face as the two take in the sights and sounds. But that year, Sprinkle’s ankle simply hurt too much to go.

She was so dedicated to taking care of her sister she kept putting off dealing with the painful injury. In the end, she found relief through surgery that finally got her back on her feet.

Initially, Sprinkle said she thought what she was enduring was just a sprain from pushing her sister up and down a wheelchair ramp at their Winston-Salem home. She’d hoped the ankle pain might heal on its own. Sprinkle, whose husband and father both died in recent years, is now Belton’s sole caregiver. It may as well be a full-time job, but Sprinkle would have it no other way.

That “sprain,” unfortunately, got worse.

The two were in Florida visiting their older sister and Sprinkle found herself unable to walk her two small dogs and having to go to a nearby emergency room. She had an X-ray done there, but the provider told her it appeared to be only a sprain. She was given a walker boot to wear on the leg and Sprinkle drove back to Winston-Salem suspecting that would not take care of the problem.

Sprinkle went to see Dr. Stuart Saunders, an orthopedic surgeon who specializes in the foot and ankle at Novant Health Orthopedics & Sports Medicine at clinic locations in Clemmons and Winston-Salem.

Saunders said his team instantly realized how important Sprinkle’s caregiver role was for both sisters. “She puts so much time, emphasis and care into taking care of (Belton), she kind of put herself on the backburner,” he said.

While Saunders’ X-ray didn’t reveal a fracture either, he told Sprinkle that he suspected one regardless. During that initial visit, Sprinkle elected to go on wearing a walker boot to give the ankle a little more time to hopefully heal.

By February 2018, her ankle was still hurting and an MRI confirmed a medial malleolus stress fracture in her ankle.

Sprinkle had a choice to make.

Why she chose surgery

“When we get in these kinds of situations, we always discuss continued conservative treatment as an option,” Saunders said. “What happened in her case was there was a constant source of pain that was affecting her ability to care for her sister. That’s what ultimately tipped her over to going through with the surgery.”

Saunders said the ankle surgery that he performed in March at Novant Health Clemmons Medical Center would have been less intense had it happened earlier. But because she put off dealing with the injury, it had gotten worse.

He performed a somewhat intense version of a procedure called an open reduction and internal fixation (ORIF) of Sprinkle’s broken bone. For the procedure, he removed the fractured bone that wasn’t healing, added bone graft to promote healing and stabilized that using plates and screws.

Sprinkle’s surgery was successful, but she’d need to take it easy for a bit and family pitched in to care for Belton.

“Every one of those people (at Clemmons Medical Center) was great,” Sprinkle said. “I came out and I had a beautiful leg and no pain. The hardest part of it was that it was my right foot and I wasn’t able to drive for a few weeks.”

After eight weeks, Saunders gave her the green light. “That’s when he gave me permission to start driving,” Sprinkle said. “Praise the Lord.”

As Sprinkle recovered, Saunders counseled her on the importance of not reinjuring the ankle, which means avoiding heavy impact activities that may put extra stress on the ankle and getting someone to help if she needs to lift her sister.

Another big factor in Sprinkle’s case was a test that showed she had a vitamin D deficiency. Her vitamin D level, Saunders said, was below the 30 nmol/L (nanomoles per liter) level, meaning it needed to be addressed. Saunders worked with Sprinkle and her primary care provider, Ashley Perrott at Novant Health Salem Family Medicine, to get Sprinkle’s vitamin D level back to normal so that she could heal properly.

“Post-menopausal women should check vitamin D levels,” Saunders said. “There are studies that show that low vitamin D levels slow bone healing. Usually in a setting of a fracture is when they find out.”

Now that she’s all squared away, though, Sprinkle can go back to her calling — taking care of Belton.

And her ankle is feeling great with this year’s fair just around the corner.

Novant Health specialists use sophisticated diagnostic imaging and nerve and muscle tests to choose the right treatment for you. If you need surgery, your doctor can arrange for you to meet with a skilled orthopedic surgeons.