Your Neighbor: Top of her game: Ashley Sharpe knows the importance of good work ethic 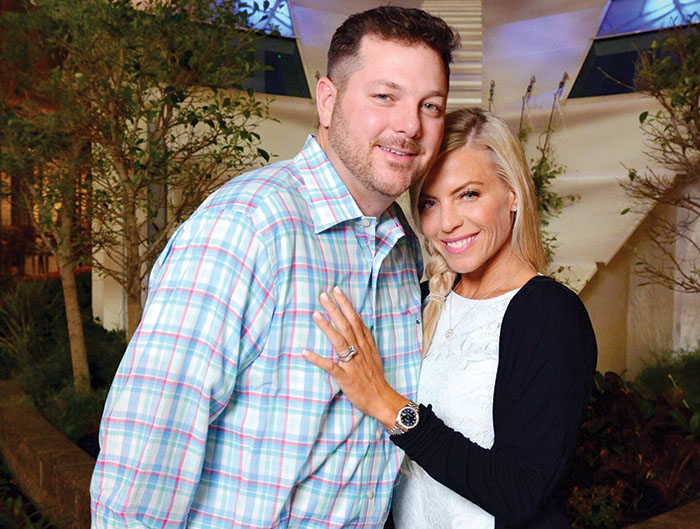 Ashley Sharpe and her husband, Zach

Ashley McKenzie Sharpe was known as a PK — that’s preacher’s kid in the church world. Anyone with a parent who holds a position of authority or certain values knows what it feels like to be held to a certain standard. As a preacher’s child, Ashley felt those subtle implications over time and found them restricting. “I didn’t think too much about it when I was younger. But as I got older, it became more of a way of rebelling.”  While Ashley refers to some of her adolescent behaviors and feelings as rebellious, some people might just call them typical of teenagers. For instance, she did not always want to adhere to the curfews her parents imposed. When it came to choosing her clothes, it was more important to wear what she thought was cool. “I was just being ornery — doing anything my parents didn’t want me to do,” Ashley laughs as she recollects.

When Ashley was 13, her family moved to North Carolina so Bill McKenzie could preach at Pinedale Church. The move came with a period of adjustment during that adolescent time for Ashley. “I was in 8th grade. We missed cheerleading tryouts. It was really hard. But luckily they had a team in middle school and we could do other sports with kids in our grade.”

No matter where they moved, Ashley had a built-in best friend, however — her identical twin sister Jennifer. She had other siblings as well.  In her family, Ashley and Jennifer were the oldest, then came Cara Dawn, then younger brother, Tyler. Ashley admits there could be drawbacks, though, to having a twin sister as a best friend. “You also had this whole competitive thing where everyone is constantly comparing you to another individual in your life. Things like, ‘Oh, that’s the pretty one,’ or ‘That’s the athletic one,’ or ‘That’s the smart one.’ So, it kind of defined you, which was a blessing and a curse.” Clearly, it did not define the pair of sisters too detrimentally. Currently, they not only both work together, but also married best friends. But before all that, there was college.

“My grandfather was the vice president of a college in Kentucky. It was called Kentucky Christian College at the time. It has a different name now. But he said if we went there our first two years, he would pay for wherever we wanted to go after the two years.” Ashley stuck it out and then went to UNC Charlotte. After college, Ashley was ready to explore other possibilities and locations available to her. She went down to Florida for a year, was a manager of a retail store. Ultimately, she came back home.

Back in Winston, Ashley went to work for BB&T. She attended the branch management development program to become branch manager. She started to do work with internal loans and equity lines. It wasn’t long before she was offered her own branch. Ashley recalls of her opportunity, “The location was not in an ideal neighborhood. Within the first 30 days, we were held at gunpoint twice. After hit No. 2, I decided I needed to go elsewhere.” The gunpoint incident had really shaken Ashley up. She decided to reprioritize her career interests.

She decided to take a position as an assistant at American Mortgage. It was below her pay-grade, but she wanted out of her previous job. Her talents were quickly discovered and she was offered a job as a mortgage loan officer. There was just one problem. Ashley had no clue what a mortgage loan officer’s job entailed. “I was so green, but I just ran with it,” says Ashley. She rolled up her sleeves and got to work. She began reading all the guidelines, asking people questions in the office, and constantly bugging real estate agents. “I kept trying to go out to lunch with agents and just ask anyone to give me a shot. And for those who did in the beginning, bless them.”

Within approximately a year, Ashley moved to Members Credit Union. Her constant connections and work ethic had paid off. Her phone rang off the hook. Still, she was learning. “Any question I was asked on the phone, I had to ask someone else. I probably tortured everyone with my questions. But I worked constantly, dug in, and found my way.” She made president’s club the first year because she attained so many clients. Throughout her career, Ashley has won trips and accolades in recognition of her hard work. Currently, Ashley works at Fairway Mortgage where she has maintained her status as the No. 1 loan officer in either units or production or both for the last six years.

Ashley has found her career very fulfilling, and starting a family doesn’t seem to be in the mix. “I didn’t have kids because I couldn’t make that choice. I didn’t have that in me to give up work. Maybe one day I will regret that, but I have my pigs.” Her pigs, as she lovingly nicknamed them, are her multiple English Bulldogs.

Perhaps one might wonder where Ashley gets her work ethic from? “Part of it, I believe we are born with. But my dad was very successful and is a very hard worker. My mom is just unbelievable,” Ashley smiles as she thinks about her mom, Marcy. “At first, she stayed at home with all of us. There was never a time where she was not sewing, doing alterations, making bows and selling them. She would teach aerobics and jazzercise. She always had 50 things going on.” Ashley also recalls how her mom even went to the University of Kentucky to get her master’s when the kids were little. Today, you can find Ashley and her mom working out together at 6 a.m. “We do many push-ups next to each other,” Ashley laughs.

Like many of us, Ashley managed to survive her adolescence. Along the way, she also found success. Our neighbor seems to have lived up to the old adage that the harder one works, the luckier one gets. If asked, it is likely Ashley would also say that a strong family foundation helps a lot, as well.  Those important familial ties can get a person through adolescence and college, and…well, life.