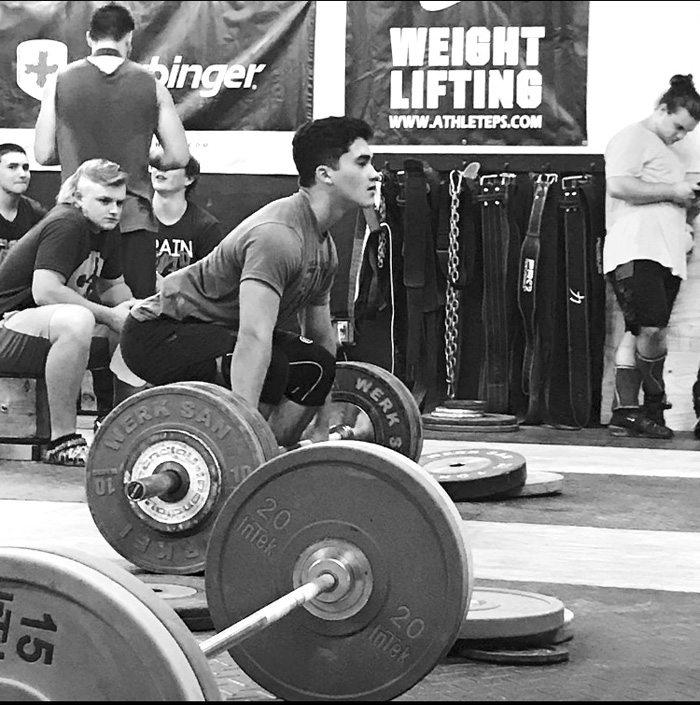 The town of Lewisville is not heavily populated, but one of the residents of this small town is a teenager who currently holds a world ranking in two sports. Sixteen-year old Ryan Grimsland competes in weightlifting and CrossFit competitions, and he consistently scores at the top of his age group in both national and international events.

Ryan began competing as an athlete at an early age when he played baseball for Coach Chris Mackie at the YMCA at the age of five. After playing baseball for several years, his interest in sports shifted to CrossFit training at 11. It was at that time that his mother Jessica was training as a CrossFit athlete, and she took Ryan and his younger brother with her to the gym and eventually enrolled them in CrossFit classes for kids. It did not take long for Ryan to adopt an interest in the sport that his mother enjoyed.

Ryan’s success as an athlete made it necessary to become an online student rather than a traditional one after his freshman year at West Forsyth. It was no longer possible to attend class every day in a regular school setting while traveling to competitions for much of the year. Jessica made a similar decision in October of last year when she left her position as a biology teacher at West so that she could help her son with his training schedule and to be able to travel with him to his events.

So, what drives Ryan to sacrifice the lifestyle of a typical teenager to train for five hours a day and to spend much of the year traveling to compete as an elite athlete? Regarding his training regimen, he remarked, “I like the feeling of a demanding workout. It involves some suffering during the workout, but there is a good feeling afterward.” Regarding competing, he stated, “I like the feeling of winning an event and knowing that I did what I needed to do to win.”

A typical day for Ryan is very demanding and involves significant self-discipline. He is awake by 7 a.m., and he begins his day by working on school work for the classes that he is taking as a student with the North Carolina Virtual Public School. By mid-morning, he is at the Mash Elite Performance Gym in Lewisville where he works out for about three hours.  After lunch, he resumes doing work for his classes, and before dinner, he puts in another two hours of weightlifting and other training. After dinner, he finishes his day by doing more school work.

As a CrossFit athlete, Ryan has had to develop skills that involve both strength and endurance. Among the events are gymnastics, running, swimming and weightlifting.   Ryan’s passion among these is weightlifting, and he feels that this where he excels the most.

Despite the atypical lifestyle that Ryan has adopted, he genuinely enjoys what he is doing.  “It’s definitely not like being like other teens,” he remarked. “I have learned discipline. Sometimes, it gets boring, but I have good friends who train with me who keep me going by doing things like cracking jokes.” He also remarked that the gym environment where he trains is hard to describe. “Music is blasting, he stated, “and everyone is a high-level athlete.”

Ryan is currently being coached in weightlifting by Travis Mash, a former multi-year champion in power lifting in international competitions. He initially did not have a CrossFit coach, but after he reached an elite level, he has been coached by Matt Torres who is a remote coach who specializes in coaching through online communication.

Ryan’s mother Jessica has a unique outlook on her son’s lifestyle and his successes. “He is a typical teenager in class,” she remarked, “but he lives the life of a professional athlete. He has surrounded himself with like-minded people who are very competitive. He balances everything well socially by having his training friends and his high school friends.”

Regarding his accomplishments, she offered this perspective: “He’s not vocal about what he does. He’s not on social media like he could be. He’s very humble, and we’ve encouraged this. We’ve stressed that he has athletic gifts that are unique, and we want to make sure that he uses them wisely.”

Given his amazing talent and mature disposition that has been instilled in him, it would seem that the future is promising for Ryan. He does plan to pursue a college degree after high school, and he has high aspirations for a career as a weightlifter. He plans to continue competing at the Junior Level which includes ages 17 to 21, and eventually at the Senior Level which includes athletes 21 and older. His long-term goal to compete in the 2024 Olympics. He will be 22 years old at the time, a prime age for a competitive weightlifter.

Ryan is certainly not a typical teenager. Not being typical in this case involves being highly skilled and accomplished, but also having a mature outlook and a genuine enjoyment for his unique lifestyle.