“They are special people”: Clemmons Fire Department honors responders who died in 9/11 attacks 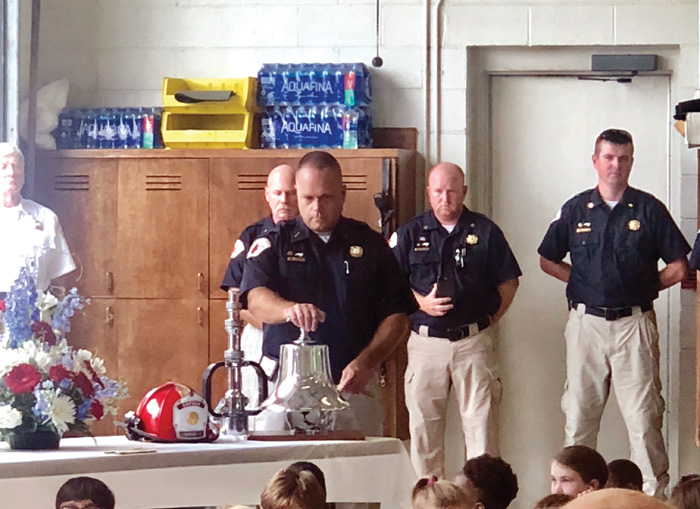 Many gathered to honor those who had fallen during the Sept. 11, 2001, terrorist attacks. Scott Hamett, pastor of Clemmons First Baptist Church, noted that nearly 3,000 people lost their lives that day, including 343 firefighters, eight EMS responders and 60 law enforcement officers. “Only 20 people were pulled out alive.”

The youngest attendees were the entire fourth grade from Clemmons Elementary School. They led everyone in the Pledge of Allegiance before Chief Brooks took to the podium.

As he looked at the students, Chief Brooks said, “You are our hope for the future. Don’t forget that.” Brooks added, “The guys to my left are actual firefighters. They are special people. This gets harder and harder each year. You are going to have to bear with me.”

“I have to say the quartet always touches my heart. The fourth verse is seldom sung,” Congresswoman Foxx said referencing the four men who sang the national anthem during the opening of the ceremony. “We have people all over the world standing in harm’s way. And that is what the fourth verse talks about. We are the most blessed people in the world because we are allowed to live here. What happened on 9/11 shocked our country. It is important to remember and commemorate because we hope we will never see, in our county, another event like that again,” noted the congresswoman. “We will continue to be a beacon of what it means to be free and caring for others.”

Tolls of the bell at the fire department were rung in honor of those fallen. The sound was sad yet significant as all were silent.

“It is very emotional,” Holmes said. “These students weren’t even alive when it happened. But they are our future,” she notes about the children and them learning about the importance of what happened on 9/11.

Frank Carus is a volunteer firefighter and deputy commander of North Carolina 1, the federal disaster team was called to D.C. and New York around midnight on Sept. 11, 2001. “Our team was deployed from North Carolina to the Pentagon around midnight that day. We were there for a couple of days and then the rest of the unit was sent to New York City after that area was stabilized,” noted Caruso. “It was a hurry-up-and-wait scenario. We were able to interact with local, state organizations and nongovernment agencies. Stretchers were out on the street waiting for people to come out who never arrived.”

Caruso is a retired captain from one of the New York city fire departments. He had a lot of friends who lost their lives. “My cousin was in the second tower when the first tower came down. He lost a lot of friends. He still questions why he is alive today and his friends are not.” Caruso added that 9/11 is an event that still effects families today. “It is a ripple effect. Families are still affected. We are here for a purpose,” says Caruso. “The reason I keep doing this disaster stuff is because you always see people come together no matter political or religious or any other differences. That is the one common thread I have seen in all these disasters around the world — people come together to help.”