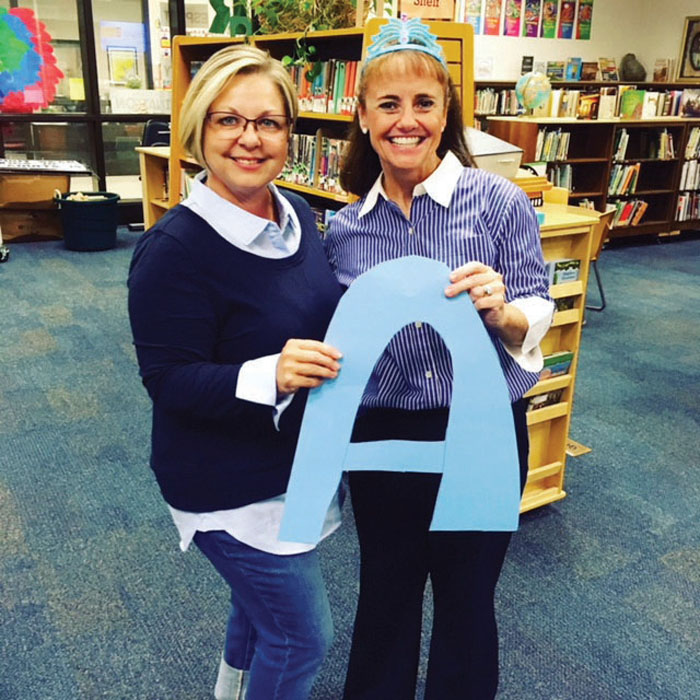 Tina Stevenson, PTA president, left, and Dr. Wendy Brewington, principal. They are holding the large cutout "A" to celebrate the Clemmons Elementary School’s A rating.

Previous columns have featured local students who have made significant contributions in our community, and this will continue to be the theme in the future. Today’s column, however, will be a “Teacher’s Edition” of After the Final Bell. It will feature the commitment of the administration and teachers at Clemmons Elementary who have committed themselves both during and after school to the success of their students. Their collective efforts have resulted in their school earning an A rating from the state, and the school has achieved the Exceeded Growth rating for the third consecutive year, making it the only elementary school in the district to have achieved this designation.

Dr. Wendy Brewington is the principal at Clemmons Elementary, and when asked to comment on why the school has had significant success over the past few years, she gave credit to the teachers, the parents, and business partners in the community. She remarked that, “the teachers here care about the kids both in and out of school.”

“They are not done with the kids when the school day is over. They attend functions involving their students, and the parents appreciate this.” Dr. Brewington also noted that the teachers have high expectations for their students and indicated to Exceed Growth every year is difficult after the students reach a certain level of success.

Linda Riggsbee, Sheila Costello and Pam Mueller are three veteran teachers at Clemmons who have a combined 72 years of teaching experience. Each of them offered their perspective on what motivates them to help their students succeed. Riggsbee, who teaches fourth grade, commented, “You care about them and they know that, and they don’t forget.” Costello, who is a kindergarten teacher, noted that she enjoys following her kids after they no longer have her as teacher. “They want to do their best for you. They don’t want to disappoint you.” Mueller has a compassionate relationship with all of her students as indicated by her comment, “When you’re mine, you’re mine.”

Dr. Brewington noted how the commitment of the teachers on her staff includes the countless hours that they spend before and after school preparing for their classes. Mueller indicated that “I’ve been in this building every day including weekends since the first of August,” and Riggsbee and Costello both said that they are often at school well before classes begin and are sometimes still in the building as late as 6:30 p.m..

Parental involvement is a major part of the success of Clemmons Elementary. Dr. Brewington and all three teachers expressed their gratitude to the PTA for raising money to provide each teacher with $100 to spend on school supplies. In addition, it was noted that parents are generous with meeting the needs of “wish lists” that teachers present to them at the beginning of the school year.

The commitment of business partners and local organizations and churches is also important to the school. An example of this was the involvement of three community groups on Sept. 11. The Lewisville-Clemmons Chamber of Commerce and Clemmons First Baptist Church both donated school supplies that day, and the Clemmons Fire Department hosted the fourth grade classes for a visit to the fire station. Jerry Brooks, the fire chief delivered an important message to the students when he remarked, “You’re our future, kids.”

Many pieces must come together for a school to be successful. The teachers who were interviewed for this story indicated their passion for what they do, and they credited the administration for giving them the freedom to be creative on their own terms. As already noted, the level of involvement from parents and from the business community have also contributed greatly to the success of Clemmons Elementary. Dr. Brewington noted that one of her main goals for the current school year is to generate funds for professional development for her staff, and she is grateful for the support that has been given by the business community to help with this goal.

My wife, Kim, is a kindergarten assistant at Clemmons, and I am a retired high school teacher. She has often said that she could not teach teenagers, and I have said many times that I could not possibly spend an entire day teaching five-year old children. Today’s kindergarten class is not anything like what we adults experienced. Days filled with naps, snack time and recess have been replaced by days involving reading centers, regular testing and ongoing assessments.

I have also said many times that while I feel that I worked hard as a high school teacher, elementary teachers deal with unique challenges and put in extremely long hours. These teachers deserve the upmost respect. This is especially the case for the faculty at Clemmons Elementary, and they are to be congratulated for the many successes that they have had over the past several years.