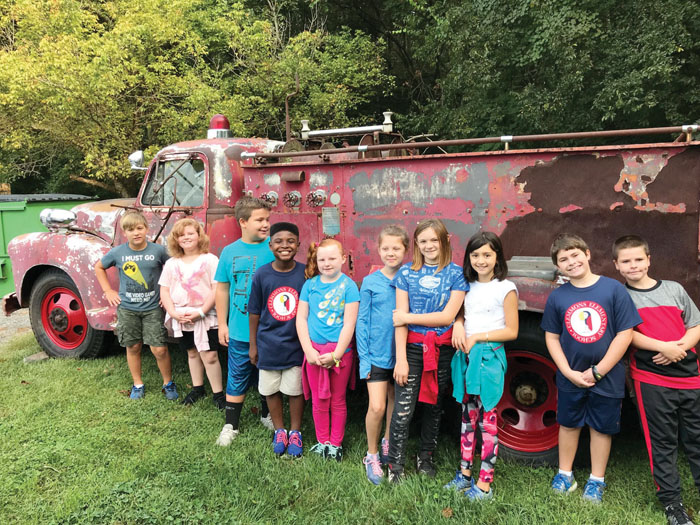 The Clemmons Fire Department is working on restoring its first truck, a 1951 Chevrolet.

Clemmons Fire Department Chief Jerry Brooks and staff are in the process of refurbishing the first firetruck owned by the department. It is a 1951 Chevrolet that has been sitting for several years. The chief and staff see this as a tool to be used to teach children about fire safety. It will also allow children to be able to climb and sit in the truck.

This will be an expensive undertaking, however we feel it will be worth it for the 1,000 children we teach each year. The Clemmons Fire Department works with all ages, including day care, kindergarten, elementary, middle and high school students.

Children need to know how to dial 911, how to evacuate their home in an emergency, and to understand the chemistry of fire. This training will help keep them safe.

We applied for a $10,000 grant from the Clemmons Foundation, and they were able to provide $2,500. Shoaf Concrete staff, who have refurbished many trucks, have inquired about being involved. Mark Shoaf and staff have really been beneficial in getting the ball rolling.

The tires for this truck are no longer manufactured, so Mark found a company in Tennessee that was able to make a set of tires. The purchase and mounting of the tires, as well as sandblasting and priming the rims, totaled nearly $5,000. Chief Brooks and staff are grateful for this donation.

We have had some other businesses indicate that they could help with in-kind services. Soon, we will be pulling the engine and transmission for repairs. We will then move on to body work, which will probably be the most expensive part of the process.

Guilford County has a firetruck, EMS vehicle and police car that allow children to play on and learn from hands-on teaching. We would love to be able to afford the same thing for our community.

Anyone wishing to help with this program can contact Debbie Corbin at Clemmons Fire Department at 336-766-4114.

Let there be light

I read with interest in a magazine article that tried to answer the question “Since God didn’t create the sun until day four, that means the first three days had no sun.” The Bible says God separated the light from the darkness on the first day. I have spent my entire life studying electronics and geology. The answer to that question is a simple one for me. He and the Bible are correct in that there was no sun for the first three days.

You do not need a sun to have light. All you need are some electrons flying around hitting fluorescent elements and they will produce light. This is observable today when you see a fluorescent lamp glow. A cathode is heated. It gives off electrons which collide with the coating (it’s poisonous) on the inside of the fluorescent tube. The bombardment by the electrons provides light which uses the phosphor to emit light.

Other examples are an oscilloscope where electrons emitted from a cathode strike the coating on the inside of an oscilloscope and give off light. An example of a coating is zinc beryllium silicate. Different compounds give different colors. Another example is your TV set. There, electrons from a heated cathode strike the coated screen and give off light. See — no sun is needed to have light. That is fact — not a theory.

Now we must get away from thinking of a round earth because it wasn’t round in the beginning. “The earth was without form and void,” Gen. 1:2. It wasn’t square, round, oblong or any other form. The earth was just a mass of electrons without any shape flying around hitting other elements and giving off light in total darkness. Think of July 4th when children hold sparklers in their hands — then light them to give off light in the darkness. The light is separated by the darkness. Or, think of lightning.

It is because people don’t have enough knowledge that they lose faith in the Bible and accept the speculations and guesses of so-called scientists and reject a belief in God. It is my opinion that the belief in Darwin’s theory of evolution is causing people to turn away from God. When I was 14, I was required to study catechism before I could join the church. It has been a great blessing and led me to study Genesis all my life. Later, that same denomination became infiltrated by the communists and stopped teaching catechism and they have been losing members ever since.