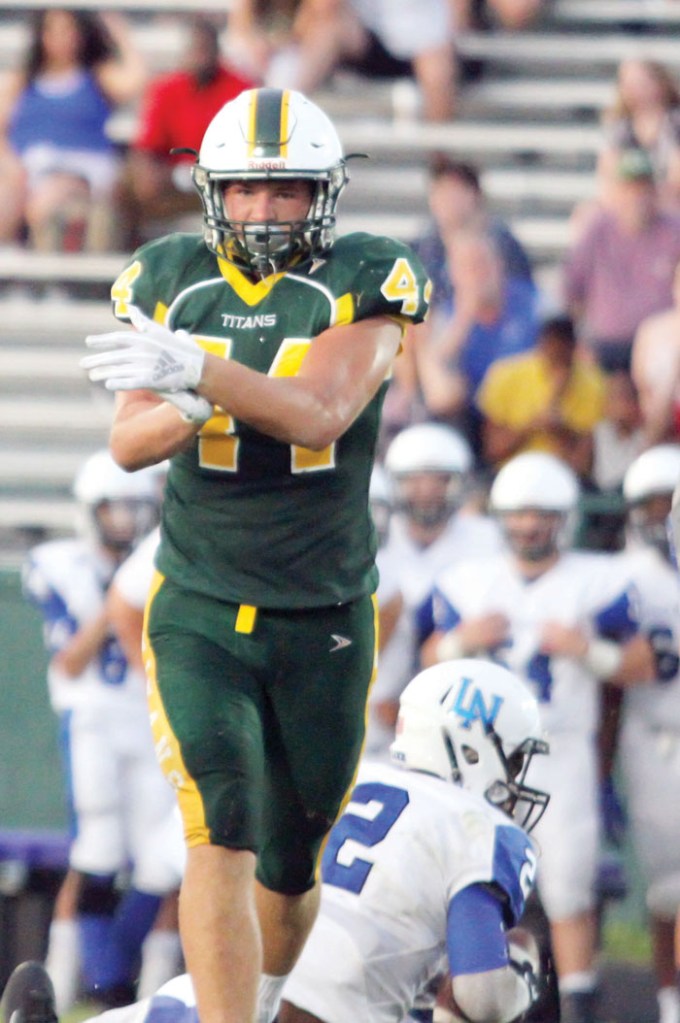 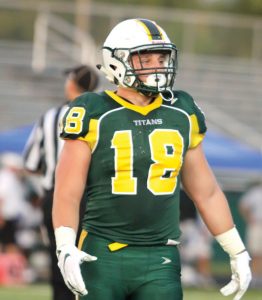 Jack Olds and Giovanni Ricciardi have grown accustomed to seeing a lot of each other on the football field over the years.

Olds, a senior middle linebacker at West Forsyth, and Ricciardi, a junior outside linebacker, have been patrolling football fields together since their days playing Pop Warner for the Forsyth County Broncos in third grade.

The two became fast friends through their love of football and their mutual position and continue to help one another every step of the way in their second season playing varsity together for the Titans.

“It’s the best of both worlds for me,” said Olds, a three-year starter who was named to the all-conference team in the Central Piedmont 4-A last season. “We know each other’s tendencies pretty well and we have a lot of trust in each other because we’ve played together for so long.”

Well, there was that brief amount of time they didn’t play together, when Ricciardi attended Reynolds as a freshman before he transferred to West after the first semester.

“I guess I couldn’t take not being with Jack anymore,” Ricciardi said with a laugh. “But we missed playing with each other. I had a few other friends I played Pop Warner with that went to West, and I just wanted to play with them again. And Jack, he’s been my best friend forever. When we are out there together, it’s pretty scary some of the things we can do.”

Olds picked up his love of the position through his father, Jim, who was a linebacker for Luther College in Decorah, Iowa.

“Other than playing some running back in Pop Warner, I’ve always played linebacker” Olds said.

Ricciardi’s father played football in high school and his mother grew up in Texas, where football is king, especially on Friday nights.

“Football has always been a lifestyle in my family,” said Ricciardi, who was named to the all-conference team as a sophomore in his first varsity season. “Growing up, I was always watching football and always watching linebackers. I took bits and pieces from that and tried to add them to my game.”

Both have also blossomed into college prospects.

“Football and school are my main focus,” Olds said. “Once school is over and practice is done, I’m usually doing football-specific training because I want to play in college. That’s always been a dream of mine.”

Ricciardi has the same goal.

“I want football to take me as far as God lets me go with it,” said Ricciardi, who has a 3.7 GPA. “I know I have to produce on the field and in the classroom.”

Olds said that there really isn’t a feeling like being on the field on a Friday night.

“Every game, I still get a little nervous until my first hit,” he said. “Once I get that, I get a much better feel for the game. My first varsity game, I remember being pretty nervous. Since I was a sophomore, I had to show them I belonged. It took me a few plays to get settled in, but once I made my first tackle, I got into the groove. I still remember it well. It was against A.C. Reynolds in the first game of the season and they ran an outside zone play. I caught him on the corner and stopped him after about a one-yard gain. I think it took me about three or four games, though, to get really comfortable.”

Ricciardi said he leaned on Olds for advice about playing as a sophomore and finding his place on the team.

“Since he played varsity as a sophomore, he was a great resource and gave me some good advice to help me get ready,” Ricciardi said. “He told me to prepare physically, especially speed-wise, so I made sure to prepare myself physically and mentally for just about anything. He helped me get through that and made sure I was ready to go. And in our first game, I wasn’t really nervous until I strapped in my shoulder pads. But I got out on the field and looked beside me and there was Jack, just like the good old days with the Broncos. After that first snap, it all just went away.”

Ricciardi had a game-saving tackle last season against Davie County and said that Olds might have been ever happier than he was.

“They had a fourth and one at the two-yard line and we were up three points,” Ricciardi said. “They chose to go for it instead of kick a field goal. The defensive line was told to shoot the inside gaps, and I saw K.J. (Henry) cross the face of the tackle, which forced the running back to bounce it outside. I just came hard downhill and flew down and just swallowed the kid. I look up and see KJ running down the sideline and that the kid was three yards short of the yard marker. And Jack was jumping up and down celebrating. That’s going to be a lasting memory.”

Olds said he has cherished every moment he has been a part of the program.

“It means a great deal to to me to wear this jersey,” Olds said. “I know how storied the program is and all the great players that have come from it. It has been a great honor the last three years for me.”

For Ricciardi, the feeling is mutual.

“It’s every kid’s dream to grow up and play on a big stage on Friday nights,” Ricciardi said. “I get to do it with my best friend, and that’s pretty awesome.”