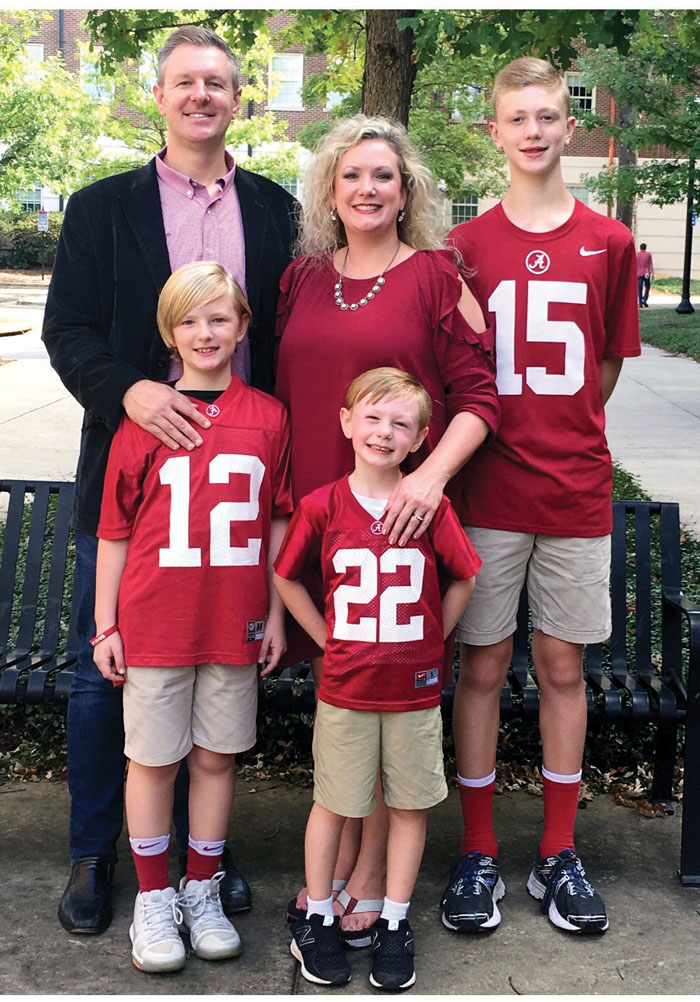 Jay McGuirk spent a year in Mexico doing evangelism work. He was knocking on doors when a guy greeted him in perfect English. He had a tattoo on his arm written in Chinese letters. When Jay asked the guy what they meant, the man told Jay it meant, “All my life, I’ve lived in pain.” Jay says, “If anyone was to tattoo a saying in Chinese letters on my arm, it would say, ‘Pretty normal guy, middle class upbringing.’”

Jay grew up in Fultondale, Alabama. Going to church and playing sports was a constant. In college, Jay went to the University of Alabama and studied industrial engineering. “I realized I had some musical talents and became the lead singer of a Christian rock band. We called ourselves, ‘Consumed.’” Jay laughs at the name. “It was the ’90s.” Jay, however, believes God used his musical talents as a gateway to call him to the ministry. The college student became the worship leader for Fellowship of Christian Athletes at Alabama. He also led worship for students and youth at a local church. The band, Consumed, also booked gigs across the Southeast at various churches, festivals and camps.

During his junior year, Jay found out a girl named Jennifer had a crush on him. Jennifer was not just any girl. She was the head of the Alabama Crimsonettes, the baton-twirling dance team. As the Tuscaloosa News says, “The University of Alabama’s Crimsonettes are to the Million Dollar Band what sparklers are to the Fourth of July.” Jay was in shock when he heard Jennifer was interested in him. “It made no sense. She was captain of the baton group for four years. When I heard she wanted to date me, I didn’t believe it because it made no sense. Every guy on campus, professional baseball players, football players, and future lawyers wanted to date her,” Jay says. “If it weren’t for me being lead singer of a rock band, I probably would not have had a shot,” says Jay in jest. The two hit it off right away.

Jennifer would prove to be a steady hand in Jay’s life, but there was another pivotal moment for him in college. A company was working with engineer students at Alabama to come up with a way to make shingles on a roof stick faster and better. “I was heading to this company to work for them as the shingle problem solver. In my mind, God said — and it is still clear as day — He said you will never be as fulfilled working on shingles as you will be working for me. I prayed for God to help me work this out. I thought I would be a terrible pastor. I thought I would do it for a couple of years and someone would say to me, ‘You are awful. Go back to engineering.’” After graduation, Jay’s friends took their engineering exam while Jay literally took a leap of faith and bypassed the exam all together.

Jay and Jennifer got married. Jay also began work at the church he had interned for. “I pretty much made every mistake I could there, so I began to pray, ‘You know God, if you are telling me to go back to the engineering just let me know.’” Instead, God opened up a position at a small church in Virginia where Jay could learn. He was asked to serve as their youth and college minister.

Within six weeks of moving there, Jennifer and Jay became pregnant with their first son. They were away from their family in Alabama. It was the first grandchild on both sides of the family. Additionally, the pastor, who the McGuirks had moved to Virginia to serve with, announced after six months, he was taking a position. The pastor would be serving at a church in the McGuirk’s home state of Alabama, nonetheless. “We definitely questioned why we were there. We almost ran out of money,” Jay recalls. “We were literally weeks away from our savings being depleted and I was looking into delivering pizzas. Plus, my ego got in the way and I started to think about how I had an engineering degree and could be making more money.” Jay could not figure out why God had put him in this position. But one day, he received a knock on his door. “One of the guys from church came and said, ‘I know you have been putting in a lot of time at church since the pastor left and I just wanted to give you this.’ It was a bonus for two months’ worth of pay. So we kept trusting in God.”

Jay and Jennifer stayed there for five years. The youth ministry under Jay, which first had ten students in middle school and high school and an additional student in college, had grown to 170. Jay was then offered a position in Mississippi. “Our son was just eight days old when we moved. My wife still reminds me of that. I told the church, ‘I know God was calling me because no one moves from Virginia to Mississippi,’” Jay jokes. In Mississippi, Jay headed up the single and young adults. However, unbeknownst to Jay, he would also be called to use his engineering skills.

One day, the pastor in Mississippi stepped into a board meeting and said he wanted to revamp everything. He was tired of the same old, same old, and really wanted to make a difference. “We relocated to a new campus, left downtown to move to the edge of town. We changed everything about the church. Then we grew from 1,000 to 3,200 people. We became one of the fastest growing church’s in America in 2012 and 2013.” One of the ways in which others were enticed to the church was by the new design. The new church had been engineered so that it was very inviting. The environment was very accessible. Jay had merged his faith and engineering skills into one miraculous church. Jay’s role expanded to connections pastor.

In 2014, Jay got a call from Calvary Baptist Church. They wanted Jay to work at Calvary. Jay declined. Calvary called again. Jay declined once more. Calvary was the complete opposite of the new church Jay had just built. But by the third time Calvary called, Jay agreed to talk. “I had started to research their website and saw Dr. Gary Chapman was at Calvary. And I thought, ‘Well everyone knows that guy.’ I thought I would just talk to them. Then, they asked if I would just fly out. I figured I would just go see it. Once we got further into the process, it became clear I was supposed to be at Calvary.”

Jay moved his family to North Carolina and has been here for four years now. His three boys go to school at Calvary. Jennifer is the upper school counselor at Calvary. “We never see each other but both work here. She is on school side and I am on the church side. I think she is better at what she does than I am at what I do.”

Something that many appreciate about Jay is his honesty. “Ministry is very tough. You can see the stats on pastors and how they have depression, anxiety, and all that. We have been very blessed. There have been very tough times, but at the end of it, I can’t imagine doing anything different. When things are tough, I always go back to what God called me to do and that seems to sustain me,” says Jay. “When broke in Virginia — we had just as many bumps for us. Every day is not up and to the right. There are days and times and seasons when we have to depend on the Lord emotionally. He knows the plan and He is going to reveal it when He wants to. Our trust, in big things and small things, always comes back to the Lord.”

Our neighbor may remind the reader of two quotes by Billy Graham. One quote likens to Jay’s trust in God. “God never takes away something from your life without replacing it with something better,” says Billy Graham. The other quote is applicable to Jay’s wit. “The only times my prayers are never answered is on the golf course.”