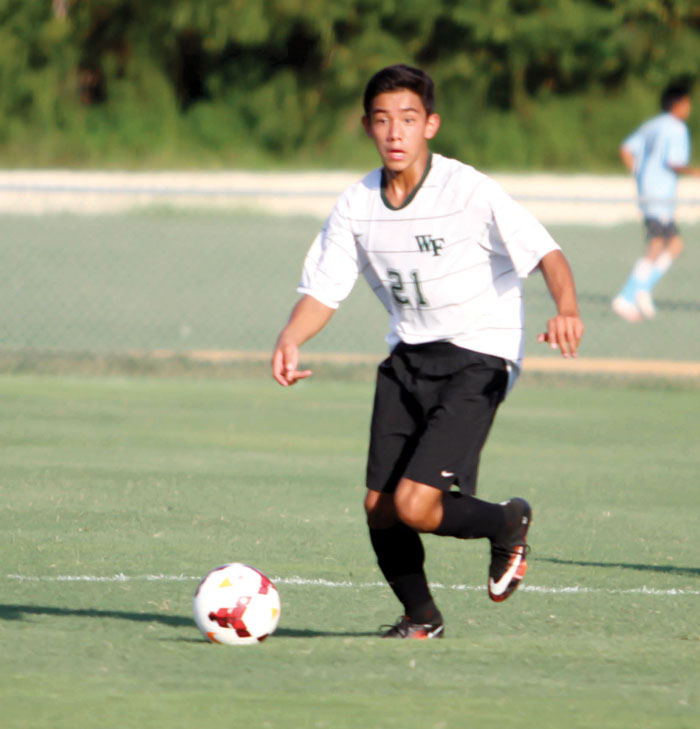 “He just had this unbelievable love for life,” said Jeffrey Williams, the boys’ soccer coach at West. “A huge smile, an infectious attitude, and a great passion for the game. He could always make us laugh.”

But since Aguilar’s death on Sept. 17 after a two-year battle with rhabdomyosarcoma, a cancer that affects soft tissue (muscles) and connective tissue (tendons and cartilage), that laughter that enveloped the team is a lot lighter.

The emotions of the last two weeks are still raw for Williams and his players. But they hope to shine some light and honor their fallen teammate in Thursday’s Central Piedmont 4-A game against Davie County at 7 p.m.

With September being National Childhood Cancer Awareness Month, Williams wanted to find a way to honor Aguilar and his family. The result: a game called “Kick Childhood Cancer,” with money raised going to straight to Aguilar’s family through T-shirt sales and to support childhood cancer programs.

As of last Friday, 520 T-shirts had been ordered with a minimum donation of $10. On the front is the West Forsyth soccer logo and the words “Kick Childhood Cancer.” On the back, the No. 21 — Aguilar’s number — and the name “Carlos” written above it.

“A lot of our parents were involved with planning and coming up with the name,” Williams said. “We know it will be an emotional night. We think a lot of his family will be there and we think there will be a big crowd to help honor Carlos’ memory. We’ll be wearing the T-shirts we had made up — I call them our ‘Carlos’ shirts — and I hope everyone who bought one will have theirs on too.’

Williams said that Aguilar was part of a talented freshman class when he arrived two years ago.

“He had this ability to score a lot of goals and had great quickness and tenacity,” Williams said. “The first half of the season, I think he led the team with 12 or 13 goals. Then the coaches started noticing in the second half of the season that he would get tired a lot quicker and his production went down. He had been having some headaches, and his parents took him to the doctor. That’s when they found out he had cancer.”

Aguilar was diagnosed with Stage IV rhabdomyosarcoma, which can spread rapidly even with radiation and chemotherapy treatments.

Aguilar and his family visited doctors in Washington, D.C., and Charlotte in hopes of finding the best treatment. A GoFundMe page was established shortly after the diagnosis, raising more than $16,000 for his care.

“He was around as much as he could be last season while undergoing treatment,” Williams said. “He would always come up to me and tell me ‘coach, I’m going to make this team’ and we would let him do as much as he was able to do. We just wanted to keep everything as normal as we could for him. He even tried running the two-mile during tryouts last year and we were like ‘Carlos, what are you doing?!’ He wanted to be out there so bad. This spring, he told me ‘Coach, I’m going to bring my mile time way down and make the team’ even though I kept reminding him his spot was secure and that we were giving him special privileges. The kid just loved to play and wanted to be around us as much as he could. Soccer was his life.”

Junior Jay Esposito knew Aguilar since kindergarten. The two were in the same class every year from kindergarten through fifth grade at Morgan and Southwest Elementary.

“We had that soccer bond, even then,” Esposito said. “We would get together during recess and kick a ball around. He was the strongest guy I know. I don’t know too many people who could have gone through what he went through. He had quite an impact on all of us, on and off the field.”

Junior Max Fuehrer got to know Carlos through Twin City soccer before they got to West Forsyth.

“He was really funny, always smiling, always trying to find a way to improve,” Fuehrer said. “We would pretty much sit with each at lunch every day of our freshman year. We used to joke with him about what we called ‘the Carlos effect.’ Anytime he got the ball, we all knew he was going to beat two or three people and then pass it to someone. That’s how good he was. So, we would just tell him ‘you do you, and when you are ready, we’ll be open.’ He always made that good pass.”

Junior Richmond Griner was also a teammate of Carlos’ before they played together at West. The two became quick friends.

“He texted me one day over the summer and asked me to do him a favor,” Griner said. “His parents were out of town, and the only thing he could really eat at that time was Cheerios. So, he asked me if I could bring him some Cheerios. I went and picked up four boxes for him and we just sat and talked for a while. It was good to have that one-on-one time with him.”

Aguilar’s funeral was last Thursday. The team wore their “Carlos” shirts to the service.

They were scheduled to play Ragsdale a few hours after the funeral’s conclusion.

“I thought for a while about postponing the game because it was such an emotional few days for us,” Williams said. “When they got on the bus after the funeral, Coach (Mike) Southard said that there was complete silence for about ten minutes. But I think that Carlos would have wanted us to play that game, and I thought it was important to have everyone together. I told them to use those emotions and play for something bigger than ourselves.”

Williams kept a jersey with the No. 21 on the sidelines as inspiration. The Titans pulled off a 3-1 win.

“It was pretty difficult to play that game, but I think we all thought the same thing,” Esposito said. “Let’s play for Carlos. It was a big attitude boost for us. It was an uplifting experience, knowing that we were playing for him out there.”