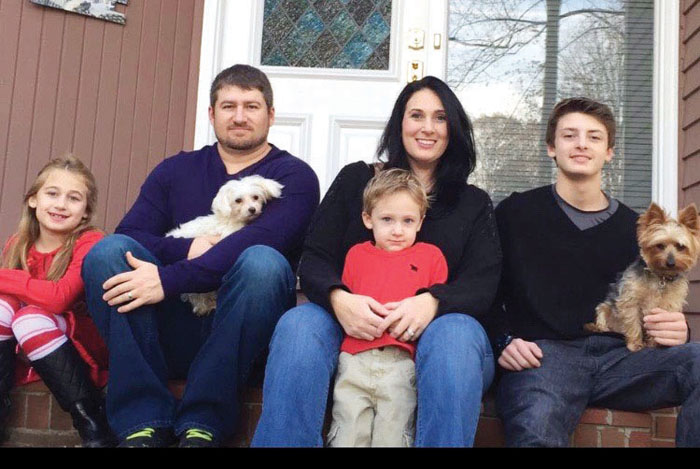 Laura Reinhardt learned at a young age to take comfort in animals. At six years old, Laura moved from Mount Airy to Kernersville. Her mom was a police officer in Greensboro. Laura was an only child and her parents were divorced. She saw her dad every other weekend. “My mom was my whole world. I developed a lot of anxiety during that time because I felt like she was all I had and with her being a police officer,” says Laura. “I worried about something happening to her all the time.”

To ease the anxiety, Laura leaned on her animals. Laura and her mom had rescued a cat. One day after a tornado, the cat came back home. Something about her was a little different, however. It turns out, she had gotten pregnant. Laura experienced the joys and wonder of seeing a mama cat have her kittens. All the kittens were adopted out except for one, Striper. “And then we got a bunny named Charlie. Our cats loved Charlie,” Laura recalls. “I didn’t have anyone else. They were my best friends. They slept with me, they got me through tough times.” The animals did not mind being on the receiving-end of Laura’s love, either.

Naturally, Laura thought she wanted to be a vet. During high school, while living in Winston-Salem, Laura volunteered with animals. At one point, she found herself sitting in a backroom with all the dog kennels, crying because she could not stand the idea of putting any animal down. At that moment, she realized, she did not have the emotional strength to be a vet. Laura decided she would go to dental assistance school instead.

Around 20, Laura had her first son, Sage. Of course, Laura continued to rescue animals and was known as being the person to call if an animal needed assistance. After a time, it became apparent to Laura that she needed to take care of herself as well.  This was particularly true because she had gotten into an abusive relationship. “It was a very abusive relationship mentally. I stayed with him for several years,” Laura lamented.

Eventually, Laura left the abusive relationship. Years later, she began to pray for another husband who would love her and Sage together. “I went on some really bad dates. But the night I prayed for my husband, my friend told me there was a guy, Mark, who loved kids and was the nicest guy in the world.” The two bonded instantly. They were engaged after four months and have been married for 11 years. They also added two more children to the clan, Nadia and Slate.

Mark shares Laura’s passion for rescuing. It is not uncommon for a stray or foster to be found in the Reinhardt household. In fact, when Laura saw that a dog would be euthanized in Harnett County if it was not rescued, she and Mark drove two hours to save the animal. When they arrived, the couple were told seven dogs and two cats would be euthanized that night. “We took them all,” says Laura. “While driving home, I started posting on Craig’s List. That was before Craig’s List was sketchy. We were able to find a home with good people for every single animal, except for our cat, Piper, whom we still have.”

Laura’s three kids have all watched and learned the value of rescuing animals in need. “Sometimes, the animal’s life depends on you,” explains Laura about why she feels the need to rescue. “It also teaches my kids responsibility and love. My three kids are the most caring and loving and sensitive and empathetic people I have ever met. I feel like it has a lot to do with the animals. They have to go through the pain of it, too — fall in love and re-home them. We visit and they are thriving and that makes room for another. You love them and they love you back.”

When rescuing an animal, our neighbor leaves us with some practical advice: