Digging it: Titans’ Lichty excels on the court and in the sand 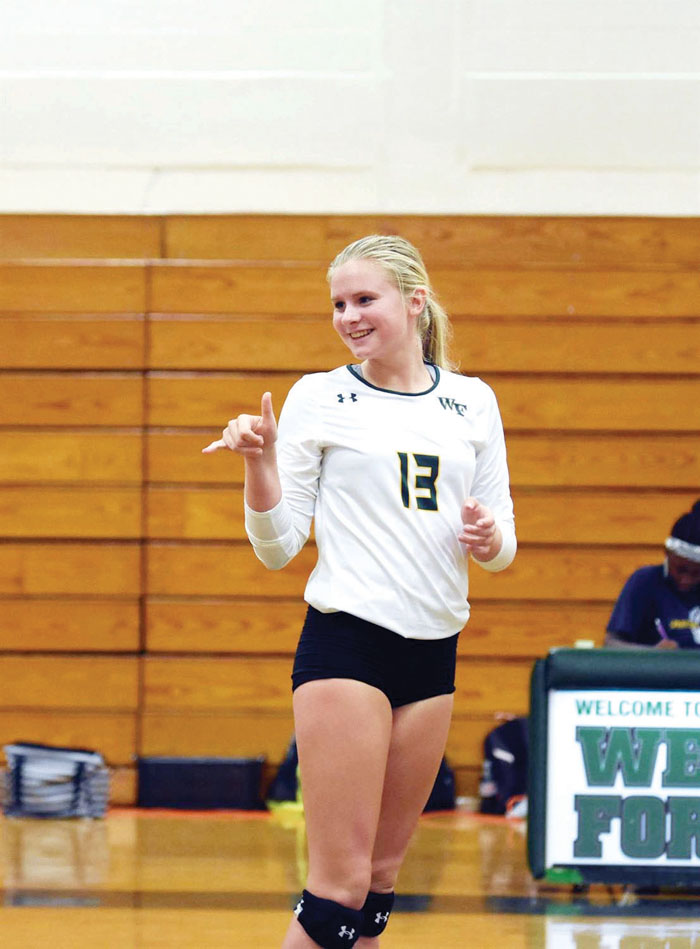 Clemmons will never be known as a budding beach town, but it may eventually be known for producing a great beach volleyball player.

No, there’s no beach volleyball team at West.

Lichty participates in beach volleyball on her own time, with tournaments for the two-woman teams usually running from March to July. That gives her plenty of time to thrive on the volleyball courts for the Titans as an outside hitter from early August through October.

But given the choice, Lichty would opt for the sand between her toes.

“I actually gave up playing indoor for about two years once I started doing beach volleyball,” said Lichty, who started playing for Champion Volleyball Club in sixth grade. “I started playing as a way to stay in shape for indoor. It didn’t take me too long to fall in love with it and commit to doing it year-round.”

It was Lichty’s mom who introduced her to volleyball. Her father discovered a beach program on the internet and suggested she give it a try.

Lichty landed with Beach South, a program based in High Point that has its own sand courts and has paired Lichty with various partners based in North Carolina for tournaments in Alabama, Florida, and California, in addition to local events.

“I remember watching beach volleyball in the Olympics and thinking it was super cool,” Lichty said. “I wanted to find out how I could play it. We found Beach South and I have loved it. I love the challenge of it. Playing with two people, you learn how to do everything. You have to hit, set, and pass and your ball control has to be really good, too. And you have to be in really good shape. Learning to move in the sand and building up my endurance was the biggest challenge, because you have to run down more balls and your court coverage is greater.”

Lichty’s love of beach volleyball has also been a boon for West. A three-year varsity starter, Lichty began her Titans’ career as a setter when she was a freshman but has spent the last two as an outside hitter.

“It didn’t take me too long to notice that she was a varsity player when she tried out as a freshman,” Coach Lauren Gillon said. “She’s the ultimate competitor. As a freshman, there was that confidence piece in playing a position she wasn’t familiar with, but she did whatever was asked of her.”

Lichty admitted the adjustment to setting was tough at first but became a role she relished.

“There was a lot to learn about playing that position, because in club, I was used to playing libero,” Lichty said. “As a setter, I had to learn all the sets, all the different footwork, and where our hitters like to get the ball.”

Last season, the 5-9 Lichty moved to outside hitter and has continued to flourish.

“She’s what we call a pin hitter on the right side, always attacking,” Gillon said. “She exhibits some of the best ball control we have. We know what we are getting with Madie because she is always touching a volleyball or always training. She has been a real asset to us the last three years.”

In addition to practicing and playing matches for West, Lichty works out twice a week at CrossFit with a personal trainer in downtown Winston-Salem, doing volleyball-specific drills that focus on explosive movements with her hips, legs, shoulders and core — muscle groups that are heavily relied up in volleyball.

“We also try to practice on the sand at least once a week at Club South during the offseason,” Lichty said. “It keeps me pretty busy right now, but it’s all been really beneficial for my training for West and for beach.

And as much as she loves playing beach volleyball, her experience at West has also brought out the best in her.

“Playing here has allowed me to make a lot of great friends,” Lichty said. “Coach Gillon provides a great atmosphere for all of us and the game teaches you so much about discipline. I look forward to finishing out the year strong and having a great senior year.”

“We wanted to do something that was beneficial and help our kids recognize that there are bigger things going on in the world other than volleyball,” Gillon said. “And with October being breast cancer awareness month, it’s the perfect time to dedicate ourselves to the cause again.”

Dillon said they have been placing a pink rain boot in the lobby of the gym during home games to collect loose coins and other financial donations. They also had a 50-50 raffle and sold T-shirts to raise money.

“We have a great group of parents that helped with everything,” Gillon said. “It’ something we will continue to lend our support to.”