After the Final Bell: West sophomore excels in music and in the classroom 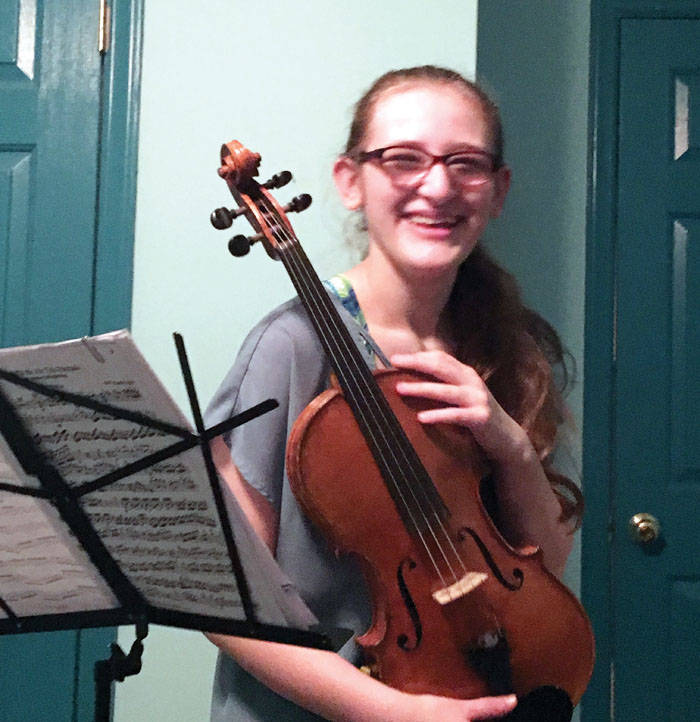 Meggie Putnam has developed her musical abilities over the years to become a talented violist, and she is an excellent student who has risen to the top 5 percent of her class at West Forsyth. She is as hard-working as she is gifted, and her typical day is a wave of non-stop activity.

Her school day begins at 8 a.m. with AP chemistry, her first period class at the Career Center. After that class, she rides a bus to West to take her other six classes. After school, she attends dance class, and she fits in dinner around an evening routine that includes practicing on her viola for about an hour and doing three to five hours of homework.

Her academic schedule includes two AP classes and several honors classes. Her favorite classes are Spanish and English, and she enjoys the challenges of her AP chemistry class. Her heavy academic load is made even more challenging by a school day that includes taking classes at two different schools. Her schedule results in a longer-than-usual day since she takes her first period class at the Career Center well before the school day starts at West.

Meggie has already taken AP world history as a freshman last year, and she plans to take several more AP classes both her junior and senior years. This should help her to maintain her class rank as one of the top students at West.

Meggie’s interest in music began when she started taking lessons on the viola when she was eight years old. She has played with the Winston-Salem Youth Orchestra since the fifth grade, and she has played with the Winston-Salem Youth Symphony for the past three years. She has also been a member of the All-County Orchestra since the sixth grade, and in this role, she has had the opportunity to perform several concerts at the Reynolds Auditorium. As a member of the Western Regional Orchestra, she has played in various places around the state.

Despite her demanding schedule, Meggie somehow finds the time to serve the community and her church, Lewisville Methodist Church. She has volunteered at the Ronald McDonald House, and last summer, she and her younger sister Peyton did a mission trip and served the homeless population for a week in Asheville.

Meggie’s parents Chip and Lisa have charged their daughters to do their best at everything they pursue. Both girls were in the AG (Academically Gifted) program in the school system while in elementary and middle school so they have been challenged for their entire school careers. Chip teaches AP environmental science and other science classes at West, and Lisa teaches AP calculus at the Career Center.

As highly regarded teachers, the Putnams understand the balance that needs to be in place for young people to achieve success while having time to unwind and enjoy their youth. The primary outlet for the family since the girls were young has been travel. Both parents and the girls enjoy traveling to Disney World and consider themselves “Disney fanatics.” Despite busy schedules, they have somehow found them time to drive to Orlando about 20 times, including a few spontaneous weekend trips. They have also been on seven Disney cruises.

Summertime has included three cross-country road trips including a two-week excursion this past summer with stops at the Redwoods National Park, Glacier National Park and Seattle, Washington. When Meggie was asked about her favorite travel memory, she indicated that it was whitewater rafting this summer at Glacier National Park. Her favorite place that she has visited is Alaska.

At just age 16, Meggie Putnam has already lived a full and successful life that has included success as a musician and success in the classroom.  She and her family have also made many memories as they have traveled to 44 states. While she relishes her memories, she has lofty goals and plans for her future. “I definitely want to be successful,” she said. “My parents have definitely played a role in my school success with a lot of positive reinforcement.”

Lisa expressed great pride in her daughter when she remarked, “We are proud of Meggie’s accomplishments. She has always worked hard to accomplish her goals. We have tried to reward our girls with the opportunity to travel so some interesting places, and it’s been nice to see the appreciation they have had for the opportunities that we have provided for them.”