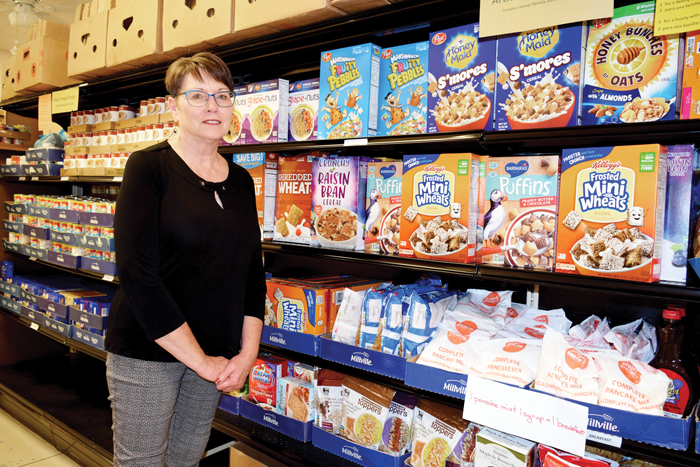 A growing business is normally considered something positive, but if your business is feeding the hungry, a growing clientele is a concern.

That’s the situation facing the Clemmons Food Pantry, and why a new and larger facility is a possibility in the near future.

“We are out of room here and have been looking for other options for about a year,” explained Kathy Kovack, executive director of the Clemmons Food Pantry. “We looked at a lot of possibilities for purchase or lease, but in the end, Clemmons United Methodist Church has agreed to a 50-year lease on property behind the church.”

While this is exciting news, there is still another important hurdle before anything moves forward. “We have construction plans and an idea of what this will cost, but until we meet with bank representatives, we don’t have the hard numbers. If those numbers are in our range, we can move forward and if not, we will wait until we can afford to go ahead.  We don’t ever want to lose sight of our mission. We are here to feed people and we won’t sacrifice that for real estate needs.”

The new facility is set to be 6,000 square feet and the location would provide more adequate parking. The current office space is 2,200 square feet.

“Right now, we have very little parking, and sometimes our volunteers have to park several blocks away, which is not ideal in the evenings,” Kovack noted. “Also, it can be very crowded in our current location, even on a slow night. We have numerous volunteers on hand, and if mothers or families comes in with two or three children, it gets crowded very quickly.”

The Clemmons Food Pantry is open to all Forsyth County residents and on average, this nonprofit serve 750 families a month. “That’s around 2,800 people,” Kovach said. A family of four can collect 40 pounds of groceries every 30 days, and  there is a wide variety of food items, including meat and produce.

One of the reasons for the crowded conditions was a decision made in January of 2015, which switched from an operation where volunteers boxed up food items for the clients to a “choice” model. This allows the clients to walk through the aisles and do their own shopping.

“We felt this was a more dignified way to treat our clients and it gives them decision-making opportunities,” Kovack added. “A volunteer accompanies them, which allows for a chance to educate people about making better and more balanced selections, but creating the space needed between the aisles meant becoming more crowded.”

The Food Pantry started in 2004 when a Sunday School Class at Clemmons United Methodist Church decided to collect food for the upcoming Christmas holiday. The realization that people aren’t just hungry on holidays led to more discussion. Kovack said when it started it wasn’t intended to be a food pantry. “It actually started in the trunk of a car, but it quickly grew. I wasn’t in that Sunday School class but I’ve heard that when they opened up for the first time, they wondered if they would have any clients. Four people showed up that first night and they were thrilled.”

Since then the operation has continued to expand, so much so that their current operation on Old Glory Road is their third location. From the church, the operation moved to an 1,100 square foot space in the Marketplace Mall near the K-Mart in Clemmons.

“In 2012, the food pantry was separated from Clemmons United Methodist Church and set up as an independent nonprofit,” Kovack explained. “By this time, we had volunteers from all over the community and all of the local churches were involved. We were getting food donated by the local grocery stores, as well as Costco, and getting salvage from Second Harvest Food Bank for a small around of money.” The organization collects money through individual and corporation donations and grants.

In 2014, the operation moved to the current location on Old Glory Road and “we were out of room in this space almost from day one,” Kovack said. “We are open to clients three days a week, Tuesdays, Thursdays and Saturdays, and we serve around 750 families or 2,800 individuals in an average month. We might have 40 people coming in on a slow night and 75 on a busy night,”

Since moving to Old Glory Road, the business as grown some 30 percent. “We don’t know why, but we are growing much faster than most pantries,” Kovack added.

The Clemmons Food Pantry is a resource for all of Forsyth County, and information about the service and its hours is available on materials available to those in need. “People also are referred to us and then word of mouth is probably the primary way people hear about us,” Kovack said.

A family of up to four can get around 40 pounds of groceries from the pantry every 30 days. The amount is based on family size.

The amount of work creates numerous volunteer opportunities, and Kovack said while they have some 300 volunteers at present, they are always looking for more. “There are a wide variety of things for volunteers to do, everything from interviewing clients to picking up food items from the donating stores to stocking shelves. We have orientation sessions for anyone interested in volunteering on the third Monday of the month at 6:30 p.m. here at the food pantry.”

Kovack said she hopes to have word on the construction costs for the new building by sometime in December. “Then we will be getting into the winter months, so if we are able to move forward, it probably would be in the spring sometime.