“Honoring public service:” Section of I-40 named in honor of Sen. Betsy Cochrane 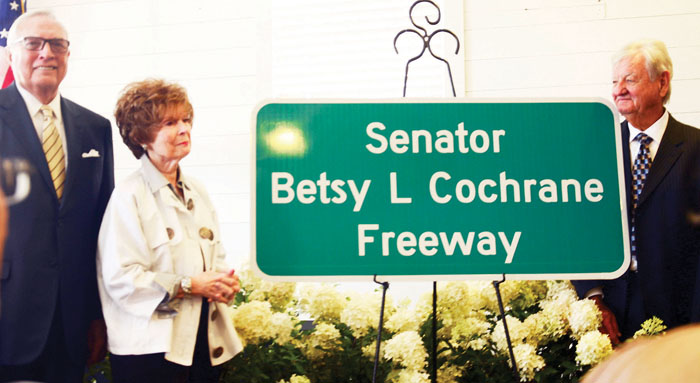 BERMUDA RUN — There’s a new sign going up on I-40 as you enter Davie County from Forsyth. There’s another one going up in the opposite direction on I-40 at Redland Road.

But that’s not what the signs say.

Cochrane, a former state House and Senate member and candidate for lieutenant governor, was honored Friday as the N.C. Department Transportation — upon recommendation by the Davie County Board of Commissioners — named that section of I-40 in her honor.

Former colleagues including Gov. James G. Martin were on hand for the ceremony at WinMock at Kinderton.

Cochrane said she learned of the honor while reading the Enterprise Record.

“It stunned me. I was so grateful they were honoring public service,” she said. “In this day and time, there is nothing about politics that will attract the level of people we need.”

She was a humble school teacher when she decided to stand up for what she thought was right and seek a seat in the N.C. House. Local men escorted her across Davie and Davidson counties, convincing others that she could do the job. Raleigh, she said, at the time, was filled with old white men.

She mentioned Rufus Brock and Fred Pratt and scores of others. “These are the people who took this school teacher out to meet their friends and neighbors and people in the district. That’s how you get elected, is when the people get to know you.”

And she was a Republican. There weren’t many of those in Raleigh in those days, either. Of 120 legislators, 18 were Republicans.

She held true to her conservative, common-sense approach to government, and held her own when debating some of those “old white men.” She paved the way, even encouraged, other women to become involved in politics.

She was still a humble school teacher, but by now had turned into a feisty politician who wasn’t afraid to stand up for what she thought was right.

“You can make a difference if you’re determined,” she said. “We grew the party for a reason. There was a philosophy we believed in — limited government and rights of the individual.”

The best part of her years in Raleigh was helping constituents navigate the bureaucratic red tape. “You can cut through the red tape and help. That’s the best part of the job.”

At times while in Raleigh, she questioned if she would ever go back. But when she got home and saw “her people,” she knew she had to go back to Raleigh on their behalf.

“I tried to be in that group who was making things happen for the people I served.”

The sign, she said, is for everyone. The people in the district elected her and trusted her, and they should feel pride when they see the sign.

“You’re a part of that,” Cochrane said. “It stands for public service.”

“It’s a testament to a remarkable career,” former Gov. Martin said, adding that she has broken more glass ceilings than anyone in Raleigh. “Hers is a noble and honorable lifetime, defining the meaning of the word honorable.”

“Betsy Cochrane has a lot to do with the growth of our party,” said former legislative member Don Kincaid. “While she was there, we protected rights of individuals. Betsy was one of the more capable people to run. She was a good legislator. She was tough.”

Former seat mate, Leo Daughtry, said he knew right away that Cochrane was special. He learned from her.

“She would not take no for an answer. The good old boys tried to exclude her. But she wanted equal rights and she got equal rights. She was a real leader and got the job done,” Daughtry said. “This state needs Betsy Cochrane today more than ever.”

District Attorney Garry Frank was a young political activist when he met Betsy Cochrane. “There was never a day I wasn’t proud of Betsy Cochrane. Her service exemplifies that of a public servant with a common-sense ethical approach. I was always proud of her,” Frank said.

Davie County Manager John Eller said Cochrane was responsive to her constituents. “They want to know someone cares,” he said. “This honor is well deserved. Sen. Cochrane, we can’t thank you enough for your efforts.”

“She always put good government first over what might be temporary politics,” said Mike Wells, N.C. Board of Transportation board member.