A two-time survivor: Her secret weapon in battle with cancer: tennis 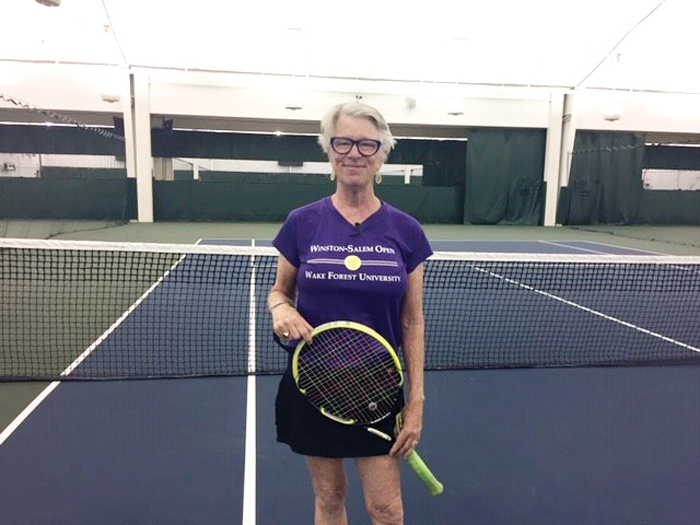 Suzie Jadoff loves it when late summer rolls around and she can return to her annual volunteer work for the Winston-Salem Open tennis tournament.

“I’ve met everyone that comes to the tournament — all the players, media, line judges, checking them in and giving them their credentials,” said Jadoff, an avid tennis player herself and a two-time breast cancer survivor. Novant Health is the official volunteer sponsor.

“What I’ve discovered is that — even more than the tennis — I’m most interested in welcoming everyone back.”

Jadoff certainly is there for the tennis, too. And why wouldn’t she be? Because when she needed it to be, tennis was there for her.

It’s what got her through her second bout with cancer.

Her path to Winston-Salem

For 67-year-old Jadoff, life has never moved slowly. She saw the world early growing up with a U.S. diplomat father and graduated high school at 16 and after three years at college got married at 19.

Her first husband, Stephen, a Vietnam veteran, died young of leukemia. Jadoff found herself single in New York City in her early 20s and a decade later she left her job in human resources at HBO to marry her current husband, Ken, an ex-priest. They lived in South America for a time before settling down in Winston-Salem, where they worked and raised their three kids.

At 40, Jadoff finally got seriously into tennis after having previously only toyed with the game in South America. The sport helped give her support she would suddenly need in North Carolina. Still in her early 40s, she was diagnosed with breast cancer when her kids were 3, 6 and 10. The local tennis community rallied — delivering meals and emotional support.

“You hear about everybody having cancer and their experiences, and it’s a disastrously scary time,” Jadoff said. “Your mind goes to ‘I’ll never see my kids grow up, how am I going to do this?’”

Luckily, Jadoff’s cancer that time was caught early and after a double mastectomy and breast reconstruction, she was back to her old self. She also made new lifelong friends with her oncologist, Novant Health’s Dr. Tom Grote and his wife, Susan.

After the double mastectomy, Jadoff didn’t expect to get breast cancer again. And yet, five years ago at 62, she was diagnosed again. This time, it was more advanced. Tennis helped her keep her going mentally and physically during radiation and chemo treatments.

“It was a good way to sort of put the cancer in the back of the mind for a while and be in the company of other people because cancer can be very isolating, if you let it,” Jadoff said. “I was happy to be out there and I was proud of the fact that on the court my tennis did not suffer.” She smiles at the thought of another victory: never vomiting on the tennis court (or off it, for that matter).

After the majority of a year undergoing treatment at the Novant Health Derrick L. Davis Cancer Center in Winston-Salem, Jadoff beat cancer again.

“I think the fact that she’s a two-time cancer survivor and cares so much for her family speaks to her drive and I think tennis gives her the opportunity to utilize her drive on the court,” said Dr. Chris Christakos of Novant Health Salem Family Medicine who has also cared for Jadoff and her family. “She’s a very gregarious lady. In spite of everything she’s gone through, I’ve never seen her seem down.”

How volunteering plays in

Jadoff belongs to multiple tennis clubs and plays league tennis. Playing doubles is her focus at the moment.

Volunteering at the Winston-Salem Open has helped her get to know Indian tennis player Leander Paes, widely considered to be one of the best doubles and mixed-doubles players of all time. She also found out one of the photographers who came out to matches went to the same high school that she attended years ago in Iran.

While she said she’ll take a call from a patient of Grote or from a friend if they want to talk about a cancer diagnosis or need encouragement, her favorite place to volunteer is tennis, where she feels most at home and like she can help.

“Cancer is an out-of-control situation, but the tennis community has been fabulous for me,” Jadoff said. “And tennis is the thing that has probably provided me with more support than anything I’ve ever done.”

About 1.7 million new cancer cases are expected to be diagnosed in 2018 alone. Here at Novant Health, our focus is on one — yours.