An unplanned act of kindness at Cherries Café 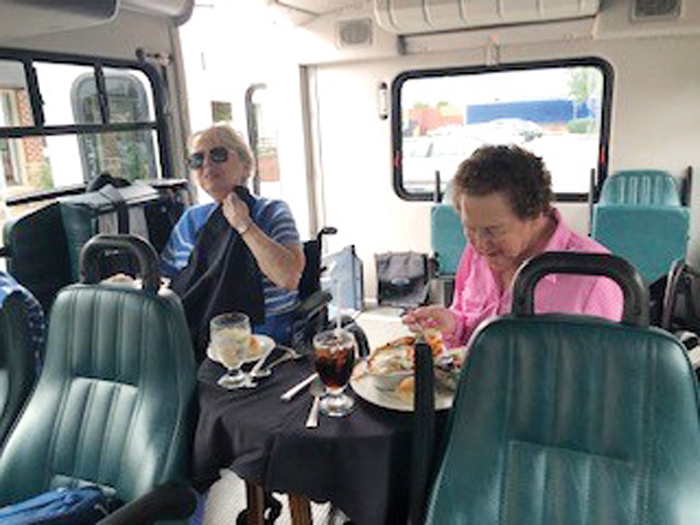 Dorothy O’Brien, left, and Nita Toleman eat their lunch on the bus after the lift broke down, preventing them from entering Cherries Cafe.

A popular Clemmons restaurant recently turned a challenging situation into a delightful lunch outing for several customers.  “No restaurant that I know of would do what they did that day.” This was the sentiment of Pamala McNeill, the director of home care at Bermuda Village, after an interesting day in which she took six residents to lunch to Cherries Café in Clemmons.

On a hot afternoon a few weeks ago, Pamala and two staff members took the residents from Bermuda Village to Cherries for their weekly lunch outing. Residents who are able to do so have lunch every week at various restaurants in the area.

What was planned to be a relaxing and enjoyable afternoon at Cherries turned into a major challenge when the lift on the bus that took the residents to the restaurant parking lot broke down. Four residents were able to make it inside, but two who are wheelchair-bound were unable to deboard the bus.

It was at this point, that the staff at Cherries went into action and began to set up seating for the two residents who remained in the bus. A young waiter named Zach McGill, who is the owner’s son, wasted no time in setting up tables that included fancy napkins to accommodate Pamala as well as Kendra Hunter, the activities director, and Rosemary Lawler, a volunteer who accompanied the group on the trip, and the two residents.

A full course meal eventually arrived, but the highlight of the trip was the attention given by Zach. “He made a million trips,” Pamala remarked, “and he didn’t rush anything. He is in very good shape, and with every trip, he jumped a railing near the bus. He really entertained us every time he jumped the rail, and we all clapped and laughed.”

Pamala contacted Gray Angell, the owner of Bermuda Village, during the visit to inform him about the broken lift, and eventually a repairman arrived to fix it. During the conversation to Angell, Pamala indicated her amazement of how the staff at Cherries had accommodated the residents in such a thoughtful way. I told him that “we had a lemon that day, and they made lemonade.”

When asked about his role in serving the residents who had to remain on the bus, Zach remarked that “we got half of the bus unloaded, and the lift broke. We took some tables apart and made a place for the meal in the bus. We eventually served a full course meal.” They seemed to be entertained when I jumped the rail in the parking lot every time that I returned to the bus, so I jumped it every time.”

Zach’s mother, Karol McGill, is the owner of Cherries. Her son is a third-generation family member who has worked at the restaurant. Karol’s mother Ollie Cherrie opened the restaurant 30 years ago, and it has been a popular place for a lunch outing for local residents for decades.

Karol was working in the kitchen most of the time when her son was serving the residents of Bermuda Village, but her mother was with them for much of the time when the meal was being served. Karol noted that Pamala, the director of Bermuda Village as well as some of the residents who visited that day, have been customers for a long time. “I’m just glad that it worked out,” she remarked. “It was nice to make them feel special.”

When asked how Zach went of this way to both serve the residents and to entertain them by jumping the rail in the parking lot, she said, “His feet don’t stay on the ground much.”

Reflecting on the day, Pamala remarked, “We were taking up several spaces in the parking lot during a busy time, and instead of being upset, the staff at Cherries took care of us.  They made a trip that could have been very unpleasant into a pleasant day. They made all of the residents feel so important. It was totally their idea to give them special treatment. If I were ever stranded again, I would want to be stranded with the folks that I was with that day, and be served again the way that we were on that bus.”