‘Having choice means a lot’: Female ob-gyns are now the majority 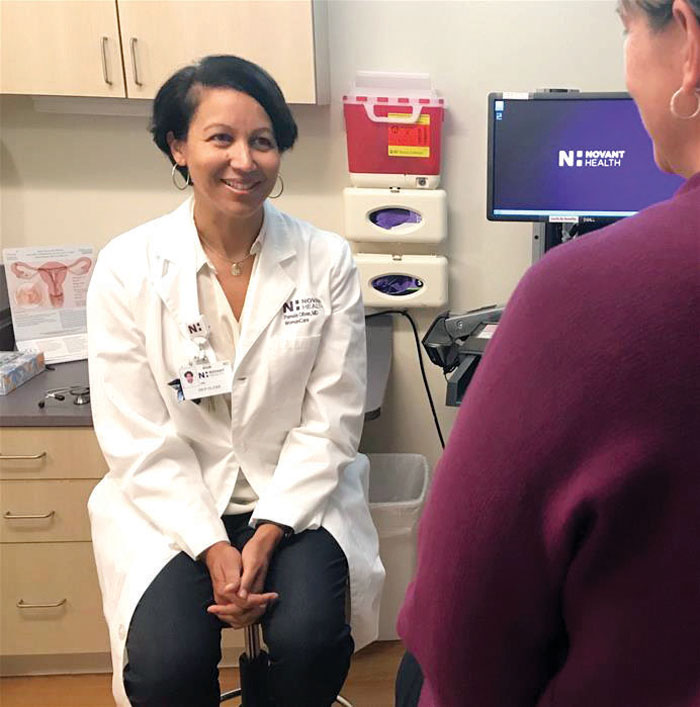 As a child, Cassandra Sherrill saw her family’s male physician for routine vaccinations, stitches and a bad sinus infection. But as an adult, when she could make her own decisions, she chose female doctors for gynecological care.

“I just felt more comfortable with a female doctor,” said Sherrill, 48, of Clemmons.

“I think if I were a man, I might prefer to see a male doctor for urological issues,” said Sherrill, a graphic designer for the Winston-Salem Journal. “… If you have choice, you can make a choice.”

It wasn’t so long ago that patients such as Sherrill didn’t have an option. In a field of medicine where all the patients are female, obstetrics and gynecology used to be dominated by male physicians.

Once the door opened, female ob-gyns flowed through at a steady pace. In 2003, 67 percent of Novant Health obstetrician-gynecologists were male. Today, that figure has almost flipped — 60 percent are female.

This mirrors a national trend. In 1970, only 7 percent of U.S. gynecologists were women. Now 59 percent are.

“A lot of this is consumer driven,” said Pat Campbell, Novant Health’s vice president for obstetrical and gynecological services. “Many women today are looking for a female provider.”

Some women believe a female doctor “will understand their needs a little better,” Campbell said. And patients are willing to be placed on waiting lists to get female doctors.

Novant Health is committed to meeting the demand from patients by providing both male and female ob-gyns. National surveys show the majority of women express no preference about the gender of their ob-gyn. But a significant number of the rest say they prefer a female doctor if they have a choice.

“It is good to have both,” Campbell said. “Many male ob-gyns are as caring as anybody you would want to come across. What’s more important is the quality of the physician and what they bring to Novant and do they fit the culture.”

Campbell said the hospital system recruited doctors who would be a “good fit” for the clinic without considering gender. She predicts the number of female ob-gyns at Novant Health will stabilize between 60 and 80 percent in the next 10 years, but will never be 100 percent.

The trend toward female ob-gyns has coincided with an increase in female students at medical schools across the country.

Fifty years ago, women had to fight to get into the male-dominated field of medicine. Today, about half of medical school graduates are women. And 82 percent of ob-gyns residents in training programs across the country are women.

Patients have responded positively to the growing supply of female doctors.

“The demand (for female doctors) has been there from day one,” Campbell said. When Novant Health began hiring female ob-gyns, “we saw their schedules fill up … They are in such high demand.”

Over 13 years of practice, Dr. Pam Oliver, at Novant Health WomanCare in Winston-Salem, said she has watched a growing number of patients request female obstetricians and gynecologists.

Years ago, “you just went to whoever was available. There weren’t options,” said Oliver, who is also senior physician executive for Novant Health’s Physician Network.

“Now, from the time you’re an adolescent, you’ve got the option,” Oliver said. “And you exercise that option for life. Having the choice means a lot.”

In Oliver’s clinic, seven of the 10 doctors are female. That’s a big change from 2005, when she finished residency at Wake Forest School of Medicine.

“When I came out of training, there was one female in each big group. That was it,” Oliver said. “Now, there are just more of us available. You have a choice to choose a female if you would like to.”

Oliver agreed that male physicians can be just as good as females and that there should be a mix. But she said some women prefer a female doctor for their personal and potentially sensitive gynecological care.

Some patients may have experienced sexual abuse or have cultural beliefs that prohibit them from undressing in the presence of men who are not their husbands. But they may also just feel more comfortable with another woman.

“It is a daunting day to have your first pelvic exam,” Oliver said. “I think it is very much more appealing (for some women) to have a female doctor.”

More in the future

Campbell, the Novant Health vice president, recalled that she didn’t even think about asking for a female obstetrician when she was planning the births of her children in 1990 and 1993. Novant Health had only three or four female ob-gyns at the time.

She liked her male doctor and “did not even think one minute about changing.” But when he retired, she too chose a female gynecologist.

“I have seen the evolution of the female ob-gyns here at Novant,” Campbell said. “I think we’ll be seeing more of this in the future.”

With the demands of juggling work and family, it can be difficult to find time to take care of yourself. That’s why Novant health is committed to making quality care accessible and convenient for women in every stage of life.