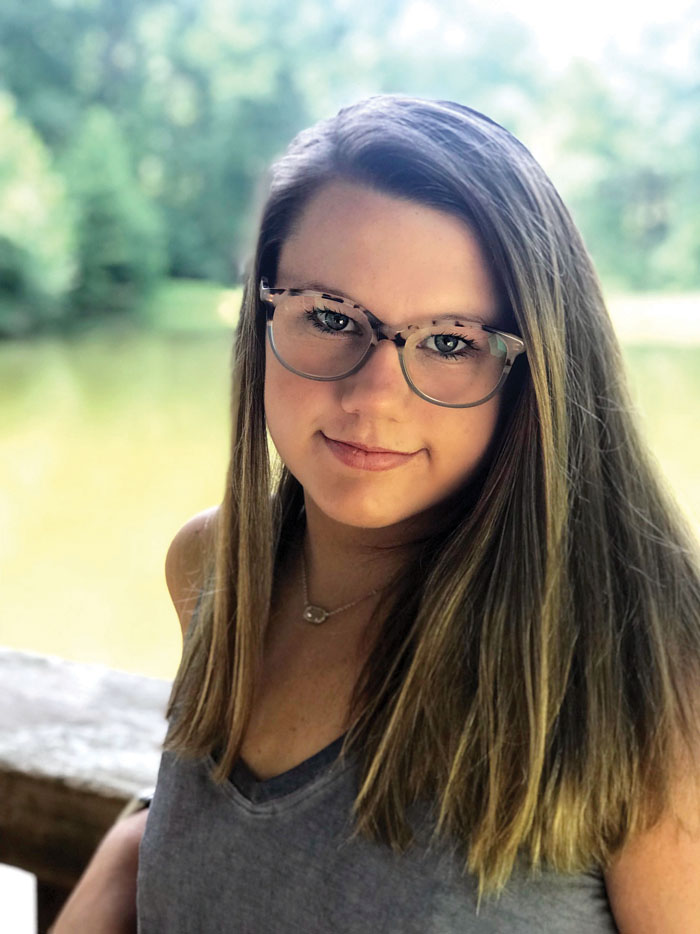 Growing up as a middle child with an older brother (Chase), and a younger sister (Emmerson), Spencer Winslow seemed to have a pretty normal family life. She began playing volleyball at eight and started swimming at 10. However, in 2014 when Spencer was in fourth grade, her mom observed a few changes in Spencer that made her uneasy. “My mom noticed how I was having mood swings and was constantly going to the bathroom,” Spencer says. Shortly after, Spencer began throwing up. Spencer’s mom, Jill, and dad, Kyle, had Spencer’s blood sugar levels checked. The results were unreadable because Spencer’s level had skyrocketed. “My mom called my aunt (April Currin) who has type 1 diabetes. My aunt told her to take me to the hospital and said she would meet us there.”

At the hospital, Spencer was admitted for the night. Multiple tests were run, keeping the young fourth-grader up all night. “I was so tired and emotional because I was exhausted,” recalls Spencer. The next day, Spencer’s doctor came in to deliver the diagnosis. Like her Aunt April, Spencer had type 1 diabetes. “I kind of knew what it was, but I didn’t know all the logistics. I didn’t really know how it worked,” admits Spencer. “I was kind of sad but didn’t really know what was going on. I was a little mad and confused.”

Spencer’s condition fell into the same category as 1.25 million Americans who also have type 1 diabetes. As Spencer would soon learn, with type 1 diabetes, the body produces zero insulin. Additionally, there is no way to cure it. There are, however, ways to manage it and to alleviate symptoms. For Spencer, after the tests provided her doctor with enough information to form a diagnosis, the next step was to put her in touch with an educator to explain the ins and outs of type 1 diabetes. “Once my doctor told me, I was taken to a pediatric diabetic educator. My educator had diabetes and knew what it felt like. That really helped; and ever since, I have wanted to be a pediatric diabetic educator,” Spencer says with certainty. “I feel like I can relate to other kids when they first get diagnosed.”

Coincidentally, two weeks after Spencer was diagnosed with type 1 diabetes, her best friend, Mya Jarvis, was diagnosed with the same condition. The kids in their class began to worry that type 1 diabetes could be contagious. They did not understand that type 1 diabetes is not a diet or exercise or viral issue. Rather, it is an autoimmune disease. To help ease their classmates’ fears, Mya and Spencer sat down with all of the kids in the class to explain about type 1 diabetes and answer questions. “We explained that your pancreas doesn’t work, and so when we give ourselves insulin, it is the key that unlocks the pancreas,” says Spencer. “The kids were still scared, but I felt like it was a growing moment for me to teach the class something they didn’t know.”

Spencer says her relationship also grew with Mya because the two could check in with each other. Spencer’s Aunt April continues to play an important role in sharing information with Spencer and her mom. Ever the concerned aunt, she is always checking on Spencer and is the first call Spencer’s mom makes when Spencer is showing signs of illness.

Over time, Spencer has learned something about herself as well. She says type 1 diabetes taught her independence at an early age. “I had to take responsibility on my own. I had to watch my numbers and give myself insulin any time I felt low or high.” To maintain a normal blood sugar level, insulin can be injected with a shot or through a pump. Spencer checks her blood sugar every time she eats or snacks — not something a typical fourth grader has to keep up with. But Spencer is a quick study. “The carbs are what raise my blood sugar. To keep my level steady, I have to give insulin based on how many carbs I eat.”

Rather than giving herself shots, Spencer has chosen to use an insulin pump. “I put into my pump what my blood sugar is so I don’t have to give myself a shot, but I change it every three days. It can go into my outer thigh, stomach, back of my arm or lower back. At first, it was very painful.  But I am used to it now and know what it’s going to feel like, so I am not as scared.”

As an active eighth grader, Spencer is able to pretty accurately gauge where her insulin needs to be when she is swimming or playing volleyball. Since she cannot wear her pump while playing volleyball or when she is swimming, Spencer has learned to predict how much she will need for each competition. “For swimming, I have to make sure I am always checking because there is a lot of movement.  So I always have to have juice boxes on hand or gummies.”

Spencer hopes to play volleyball in college and is passionate about pursuing a career as a pediatric diabetic educator. Until then, the next place one might see Spencer and her entire extended family who live in the area, is at the JDRF walk on Oct. 27. The walk, an event aimed at supporting research for type 1 diabetes, starts at 10 a.m. at the BB&T Football Field in Winston-Salem.

“The money raised through JDRF helps to come out with new devices such as the artificial pancreas and funding research,” says Jill, Spencer’s mom. “It is a great cause and we do that every year.”

“We invite people and make shirts for everyone,” Spencer adds. “My friends and family come to support us. It is also a way for us diabetics to feel like we have others there who have something in common.” The name of Spencer’s team is “Sprint for Spence.” Anyone can donate to her team at www2.jdrf.org.

As our young neighbor walks with her friends, neighbors and family, we wish her well — not just for this event, but for her journey in life as she aspires to help others.