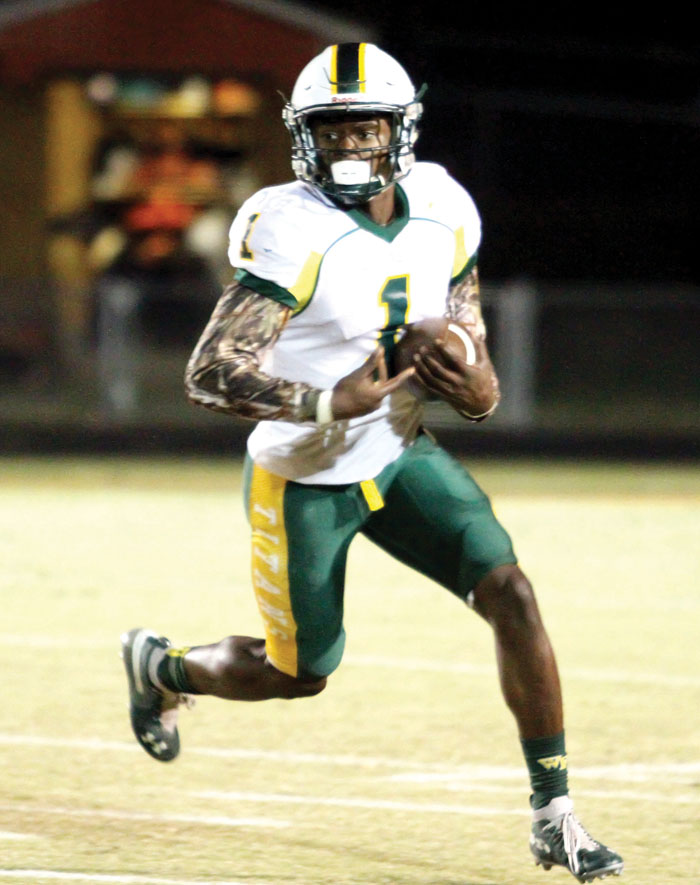 Visiting West Forsyth overcame a sluggish start and used four big scoring plays and a punishing defense to pull away for a 27-13 win against Davie County last Thursday in a Central Piedmont 4-A matchup in Mocksville.

The Titans got touchdown runs of 45 and 61 yards from G’mone Wilson, who finished with 193 yards on the ground on 26 carries, and two touchdown passes from Jalen Ferguson that went for 45 and 33 yards, respectively.

West’s defense did its job again by keeping Davie out of the end zone despite the War Eagles running 36 more plays on offense.

Both of Davie’s touchdowns came as a result of a short field, the first of which came after a blocked punt gave the War Eagles the ball at the West 20-yard line.

Josh Robinson, who finished with 139 rushing yards on 26 carries, scored on a 17-yard run that gave Davie an early 7-0 lead.

West (6-3, 2-1 CPC) responded on its next drive when Wilson scored on his 48-yard burst with 36 seconds left in the first quarter to tie the game at 7, which was also the score at halftime.

Coach Adrian Snow said the message to his team at halftime wasn’t one of panic or frustration. It was honest.

“I told them how much I loved games like this,” Snow said. “I love these kinds of games because I want to see what they are made of. And these kids are resilient. We have to fight for everything we get. They had some big dudes up front and plugged it up on us pretty good in the first half. That’s the way it is every time we play these guys.”

Wilson’s 61-yard scoring run came on the Titans’ opening series of the second half when he busted through two tackles and took off for the end zone to give the Titans a 14-7 lead.

“It was just a simple power play and the O-line got the job done,” Wilson said. “All I had to do was run through the hole. They made it easy.”

West took to the air for its final two scores. Ferguson connected with Archie for his 45-yard scoring catch that capped a nine-play, 80-yard drive to start the fourth quarter to stretch the lead to 21-7 after Christian Kaplan’s extra point.

The Titans sealed the win when Ferguson hooked up with Ja’Quan McMillian on a fourth down play with 4:19 left.

“We knew they were trying to pack it in on G’mone and felt like we could take some shots in the air,” Snow said.

Davie scored its final touchdown after recovering a fumble at the West 44. Quarterback Nate Hampton scrambled and stretched out to cross the goal line for a 6-yard scoring run for the final points.

Davie was able to sustain drives most of the game, but it had trouble finding the end zone. The War Eagles also missed three field goal attempts.

“Routine is a big deal and playing on Thursday isn’t part of our normal routine,” Snow said. “We don’t even practice on Thursday. Davie was in the same boat as us as far as that goes. But I think it threw us off because our routine was off. Regardless, you still have got to go and play. Eventually, we finally got going. We were able to figure out where they were hurting us defensively and we made those adjustments.”

West will be back at home on Friday against Glenn for Senior Night. Kickoff is scheduled for 7:30 at Jerry Peoples Stadium, and the Titans will honor the seniors playing in their final home game of the regular season.

One of those seniors, cornerback Ja’Quan McMillian, was named to the Shrine Bowl team last week. McMillian has committed to play at East Carolina.