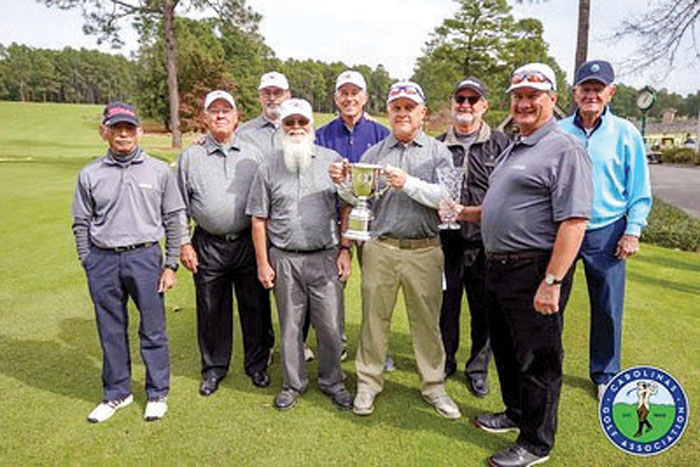 The team representing Tanglewood was able to put together the first 11-0 undefeated season in the history of the Carolinas Senior Interclub Championship.
“It’s great because we’ve played 21 guys this year. We had a big roster and everyone was contributing,” Jim Williams of team Tanglewood said. “We went 11-0; Undefeated. I don’t think anyone’s done it before and it’s going to be a while before anyone is able to do it again. Unless we do it.”
With 83 teams competing in the third season of the Carolinas Senior Interclub Championship, Tanglewood Park Golf Club will proudly have their club’s name engraved on the Thomas J. Thorpe trophy, named for the CGA executive committee member instrumental in the administration of the Carolinas Interclub seasons.
This means even more for the team and the club itself when you consider that they just reopened their historic championship course this week. Tanglewood’s championship course, which hosted the 1974 PGA Championship and the Champions Tour’s Vantage Championship from 1988 to 2002, has been closed since May of 2018 for major renovations.
“You can tell it means a lot,” said an emotional Mark Robson, Tanglewood team captain. “What a year. This is great for Tanglewood and the TGA (Tanglewood Golf Association). We just reopened our championship course and when this trophy is in there, I think it’s going to mean a lot to us to represent the club so well.”
Team Tanglewood didn’t lose a single match in the finals. In the first group, Chester Naramore representing Verdict Ridge made a difficult five-foot slider to win the back nine and split the overall. Had he missed the putt, three more points would have been captured by Tanglewood. Instead, the groups split the points 3-3 in the opening match.
The rest of the matches all went to Tanglewood. Robson and his playing partner, Dickie Brewer, were able to close out the match on the 17th green. They were the only group to sweep all six points in the finals.
“It was really a team effort,” Robson said. “When I had to tell people they weren’t playing they said, “whatever’s best for the team.” That made it easy because that was the toughest part of the job. I wish we could have brought 21 guys to play. They missed a terrific opportunity but I think they’ll understand now that we are bringing home the trophy to Tanglewood.”
This is the second year in a row that the team representing Verdict Ridge has finished second place in the final match of the Carolinas Senior Interclub Championship. Last year they were defeated by Pinehurst No. 9’s team in the finals hosted at Pinewild Country Club’s Magnolia Course.
In this, the third year of the Carolinas Senior Interclub Championships, the program continues to grow. In the inaugural season 45 teams participated. In season two, the number of participants jumped to 74. This year, 83 teams competed in the Carolinas Senior Interclub Championships and that number is expected to continue to grow.
“The program is growing so fast, ” Tom Thorpe said. “I get calls about it all the time and seniors are asking about it at our four-ball events. I know the golf demographics in the Carolinas is aging up and that’s where the growth is right now in the game. I’m glad to see where we are at since we started the program and am excited to see where we can take it.”
The CGA wishes to thank the members and staff of Pine Needles Golf & Lodge, especially the General Manager and Director of Golf, Graham Gilmore, Sr. Assistant Golf Professional Andy Kiker and Director of Golf Course Maintenance David Fruchte.