The boy’s and girl’s cross-country teams at West Forsyth won their final tune-ups at the Midwest 4-A Regional last week and will head back to Ivey Redmon Sports Complex in Kernersville for the NCHSAA 4-A state championships on Saturday with plenty of momentum.

The girls team breezed their way to the regional title by placing five runners inside the top 14 to finish with 38 points, easily outdistancing runner up Reagan (68).

A little more than a week after finishing third in the Central Piedmont 4-A Conference meet behind Reynolds and Reagan, the boys team flipped the script on the conference rivals to win the regional with 74 points. Reagan (83) finished second and Reynolds (90) finished third.

Nathan Newsome, the girl’s coach, expected his team to do well despite some nagging injuries that have flared up all season for a couple of his runners.

“We were pretty confident heading into the race,” Newsome said. “Eliza (Broce) has been dealing with a couple of things for the last weeks, and Shelby (Lowder) has had some issues with her knee and calf. It’s been a while since we’ve had every kid healthy.”

The course at Ivey Redmon was also somewhat of a concern after two inches of rain fell in the area last Friday.

“We were excited to see how we could do with such a rainy course,” Newsome said. “We knew the times weren’t going to be fast, so we kept our focus on placement. We were hoping to get all five runners in the top 15, and we ended up getting all five in the top 14. We were the last race to go that morning at 10:30, so the course was even more chewed up by the time we started. There were some places with standing water and squishy mud in flat spots. Going down hills was pretty slick. Under those conditions, the kids raced really well.”

Jeff Thompson, the boy’s coach, was pleased with his team’s result, especially given their finish during the conference meet.

“I told them after the conference meet not to hang their heads,” Thompson said. “We’ve got another opportunity coming up at the regional. It’s funny how it kind of happens that way sometimes, when you don’t win the conference but do well at the regional or state meet. In 1994, when our girls track team won the state championship, they were not conference champions. And when the boys won the 2017 state track championship, we didn’t win the conference that year, either. But that can happen at a meet like this when you have more kids running. And our guys stuck together in our pack, which is really beneficial in a race like that.”

Thompson said that Brock Newsome and Cole Meixsell’s performances made a huge difference for the Titans in the regional.

“Brock didn’t have a good race at the conference meet and he knew that,” Thompson said. “He really focused on coming back for the regional. He did a good job of managing himself and was ready to go. Cole Meixsell had been dealing with an injury that developed an injury after the conference meet and we weren’t even sure if he was going to be able to run. He took about three days off to try to heal. Last Friday, he said he felt OK. And if he didn’t run last Saturday, we probably don’t win the race. We would have qualified, but we wouldn’t have won. But each of those guys — Will, Jeremy, Brock, Cole, Jackson — they all had to do their part and it all came together.”

Both teams will have one final chance for it all to come together on Saturday. Both teams know they will have their work cut out for them to bring home state championship trophies.

“The Mideast and Midwest regions are always really strong,” Thompson said. “Cary Green Hope is always really talented and will be tough to beat. We’ll line up and give it our best shot and see what happens. We’ll be on our course that we know well and race at a lot. We have a young team — only one senior in our top five runners — and they are putting the work in. Now it’s time to see where it all leads us.”

The biggest challenge to the girl’s team will be from a school representing the Mideast region. Cardinal Gibbons breezed to the regional title last weekend by placing its five runners in the top 10, four of whom posted times under 19 minutes.

“Cardinal Gibbons is really deep, maybe deeper than anyone even knew,” Newsome said. “They performed really well in their regional last week. Four of their six kids are seniors, and motivation won’t be an issue for them. One of their runners died in a car accident last week, so I’m sure that will also be on their minds. We finished third last year, which was actually kind of disappointing because we had an injury and an illness right before the race. Except for the Wendy’s Invitational, we’ve won every race we’ve competed in this year. Now, the hay’s in the barn, so to speak, so we’ll just be sure no one steps in a hole or trips over a root during training this week.” 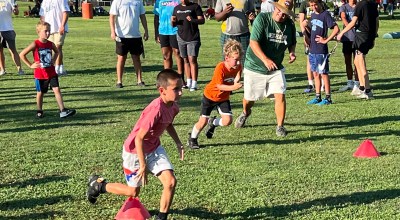