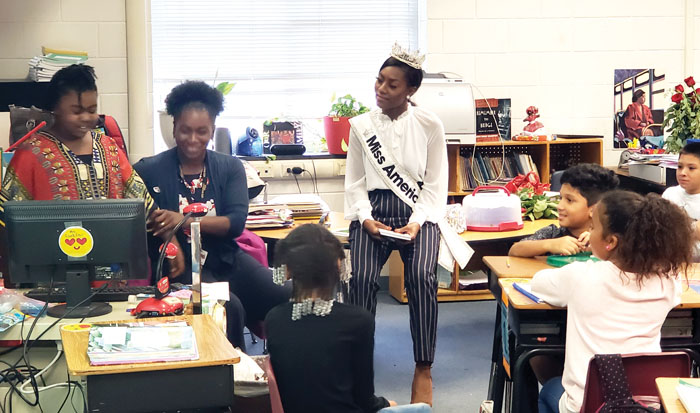 Miss America Nia Franklin speaks to students at Ward Elementary School in Winston-Salem. Her mother, Kristy, second from left, is a teacher at Ward. Photo by Mark Bee, Clemmons Courier.

On Monday, Miss America Nia Franklin spoke to the student body at Ward Elementary School in Winston-Salem. Franklin, whose mother Kristy is a teacher at Ward, was the keynote speaker for PBIS (Positive Behavior Intervention Support) program at Ward Elementary
Nia Franklin was born in Winston-Salem and lived in the state through graduate school. She earned an undergraduate degree in music composition from East Carolina University, and a master’s in music composition from The University of North Carolina’s School of the Arts. Shortly after, Franklin was awarded a Kenan Fellowship at New York’s Lincoln Center Education and made the move to New York City.

During Franklin’s college junior year, her father was diagnosed with non-Hodgkin’s lymphoma, and she became his stem cell donor. This turn of events led Franklin to the Miss America organization. “I had to find a way to pay for myself to go to school and so I entered this competition and this organization, and it became much more than just the scholarship money for me. It was also about the mentorship, leadership and sisterhood you find in this program.”

Franklin was crowned Miss Five Boroughs at the age of 23, and then went on to win Miss New York 2018. She was awarded the job of Miss America 2019 on Sept. 9.

Nia has been a teacher and music mentor, and has written over 100 songs, including one she began performing at age five. (The lyrics begin: “Love, love, love, love, love is the only thing that matters to me…”).  For the Miss America 2019 competition, Franklin sang “Quando m’en Vo’” from Puccini’s La Boheme and wowed audiences and judges alike.