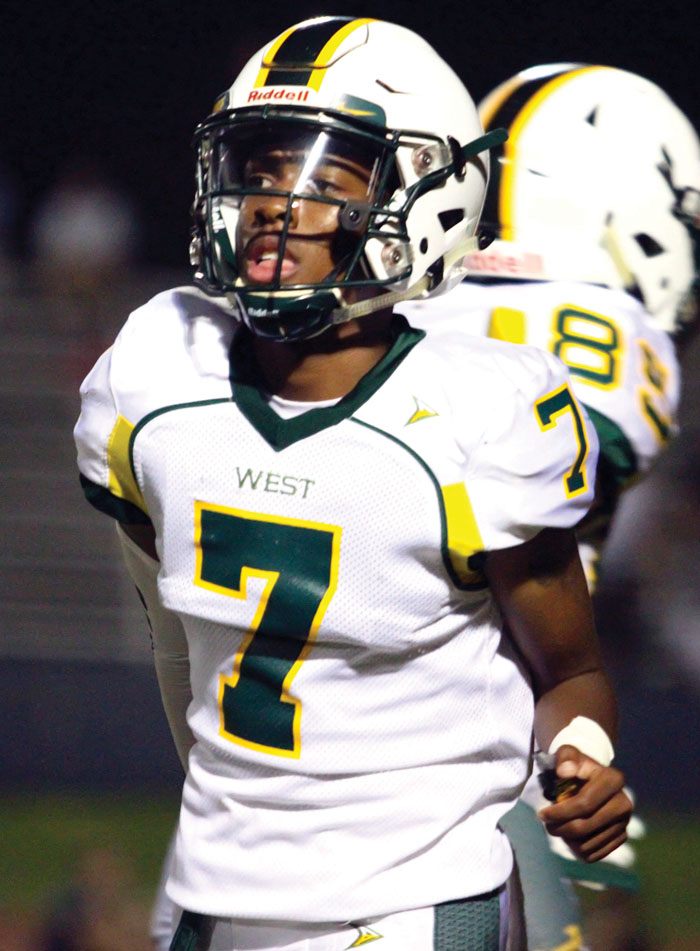 If you didn’t get a chance to see West Forsyth’s 21-16 come-from-behind win at Reagan last Thursday night in the final game of the regular season — or if you just didn’t get enough of the frantic finish — fear not.

The two Central Piedmont 4-A Conference rivals will square off against each other again on Friday night, this time at Jerry Peoples Stadium, in the first round of the NCHSAA 4-AA playoffs. Kickoff is scheduled for 7:30 p.m.

West’s win against Reagan last week was its fourth straight and clinched the No. 2 seed from the CPC for the state playoffs. Reagan, relegated to a tie for third with Glenn and Reynolds, won a draw to get the No. 3 seed — and another game against week for the second straight week.

The Titans (8-3, 4-1 CPC) spotted Reagan a 10-0 lead in the first quarter before it bounced back, riding the legs of G’mone Wilson, the passing prowess of Jalen Ferguson, and a defense that continues to get the job done.

West led 21-10 late in the fourth quarter before Reagan make things interesting. Quarterback Gabriel Hollingsworth hooked up with Kallai Buyna on a 27-yard touchdown pass with 3:00 left to cut the deficit to 21-16, but the two-point conversion failed.

West took over from the Reagan 43 after the ensuing kickoff but gained just two yards in three running plays and was forced to punt.

Jake Hill struck the perfect punt that was downed at the Reagan 1-yard line, where Reagan took over and needed to drive the length of the field with no timeouts and score a touchdown to win the game.

“They had to drive 99 (yards) there, and if they find a way to do that — especially with no timeouts — then you tip your hat to them,” Coach Adrian Snow of West Said. “That’s a tough thing to do. They were able to move it a little bit and made it interesting, but at the end of the day, you find a way to win. That’s all the matters.”

Hollingsworth orchestrated an 11-play drive that drove to the West 31, but two straight incompletions on third and fourth downs sealed the win for the Titans.

“I hang my hat on being a good defense, and those guys stepped it up again when it mattered most,” Snow said. “Those guys knew what to do out there. Keep it in front of you, don’t let them hit a big one. Make them drive it. And they got a stop. I didn’t have to tell them anything. This is crazy, and maybe because it’s because I’m getting older, but I stood there with my hands in my pocket and let them do what they knew how to do. At the end of the day, we found a way to win. That’s all the really matters.”

It was another strong performance by the defense, which hasn’t allowed more than 16 points during five conference games and shut the Raiders out for 33 minutes after allowing 10 points on two of their first three possessions.

C.J. Hill kicked a 27-yard field goal on Reagan’s second possession, and after West fumbled the ensuing kickoff, the Raiders took advantage of a short field and took a 10-0 lead on Hollingsworth’s 8-yard touchdown run.

West responded with a 6-play scoring drive that bridged the first and second quarters that was capped on a 4-yard touchdown run by Wilson, who finished the game with 187 rushing yards on 27 carries, to close the gap to 10-7.

The Titans struck again just before halftime, covering 64 yards in 1 minute, 36 seconds and finding the end zone on an 11-yard touchdown pass from Ferguson to Ja’Quan McMillian. Christian Kaplan’s extra point gave West a 14-10 lead — and plenty of momentum — heading into halftime, especially since the Titans would receive the second half kickoff.

Ferguson’s pass was a perfectly placed fade route that McMillian hauled in in the left corner of the end zone.

“That was big. Really big,” Snow said. “Just a little hitch-and-go to Ja’Quan, and he’s just a baller. He just makes plays for us all over the field. Jalen made a great throw and that really gave us a nice little shot in the arm before halftime.”

The Titans seized on that momentum to open the second half, marching 80-yards on their opening drive in seven plays and getting a 2-yard touchdown pass to Trae Archie from Ferguson.

The key play on the drive came when Ferguson — who completed 10 of 18 passes for 117 yards and two touchdowns — delivered another perfectly placed pass that C.J Graham hauled in with one hand on the right sideline, a gain of 30 yards that gave the Titans first and goal from the 2-yard line.

“That was huge for us because it gave us that separation,” Snow said. “We talked about it at halftime and what we wanted to do, and we went down and did what we needed to. It gave us that two score separation, and I knew our defense wasn’t going to let us down.”

Now, phase three of the season will start for West.

“We’re on a little run right now, four straight in the conference and eight wins in the regular season,” Snow said. “A lot of people were marking us down at the beginning of the season and saying we weren’t going to be very good, but our kids keep fighting and working hard, and that’s all we can do. We get at least one more home game now, and our kids love playing in Clemmons and it should be a lot of fun again.”