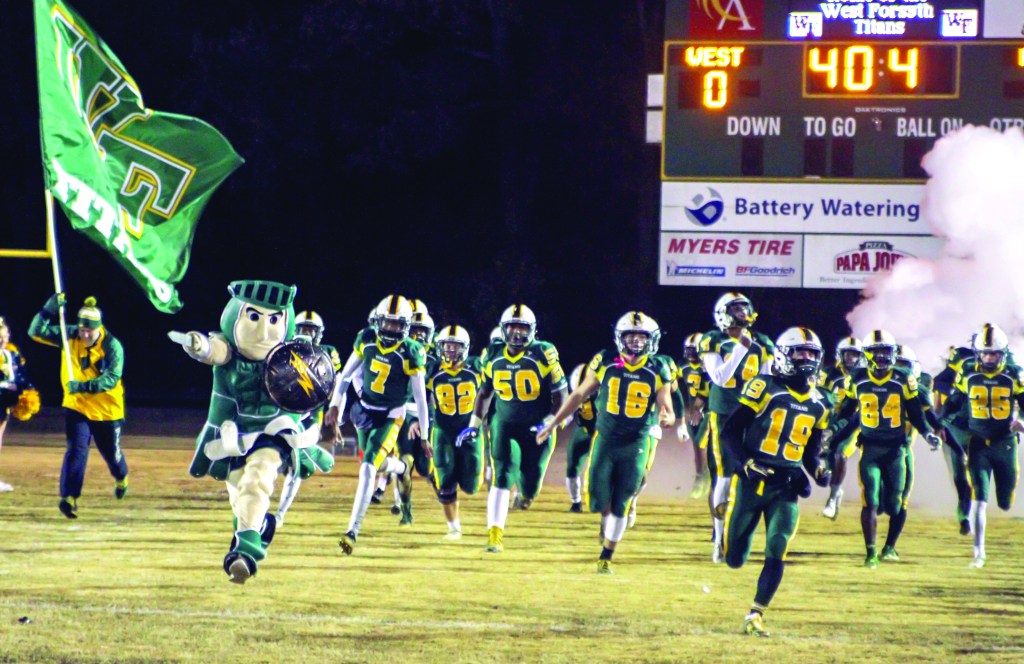 As the final seconds of the season ticked away for the West Forsyth football team Friday night against Reagan, the reality set in.

Players were exchanging hugs on the field and on the sideline. The embraces were longer for members of the senior class, many of whom played their last game of competitive football.

One senior player took off his gloves and set them on the field near the 40-yard line, a sign that the season was over and he had no more left to give.

The hugs and ‘I love yous’ were frequent from Coach Adrian Snow after gathering his team for one final post-game chat. There were plenty of long faces and the tears were flowing.

Eight days after West downed Reagan to end the regular season, the Raiders returned the favor and came out firing on all cylinders to pull away for a 34-20 win in the first round of the NCHSAA 4-AA playoffs at Jerry Peoples Stadium.

Reagan (8-4) will go on to play Richmond County in the second round. West, which saw its four-game winning streak snapped, finished its season 8-4.

The Titans’ offense sputtered for most of the game and at times, couldn’t get out of its own way because of untimely penalties.

The defense, which had been especially stingy since Central Piedmont 4-A Conference play began on Oct. 5 against East Forsyth, allowed more than 400 yards of total offense — 334 of which came on the ground. Reagan’s 34 points were the most allowed since the Titans surrendered 27 points to Northwest Guilford during a win on Sept. 28. West hadn’t allowed more than 16 points in any of its five conference games.

West trailed 14-13 late in the first half and was driving when the momentum swung.

Jalen Ferguson’s screen pass was intercepted by Joshua Green — his second of the game — and returned 65 yards for a touchdown, pushing the Raiders’ lead to 21-13 at halftime.

“That was just huge,” said Coach Josh McGee of Reagan, who was a star quarterback for the Titans in his playing days and an assistant coach under Snow before he became the Raiders’ coach. “That’s the same kid who had just given up the touchdown pass on the previous possession, a little hitch that he just missed the tackle on. For him to make that play in that situation just set the tone, I think, for the rest of the game.”

D.J. Moyer scored his second touchdown of the game on Reagan’s first possession of the second half, pushing the Raiders’ lead to 27-13.

From there, West tried to play catch up.

“It forces them to pick up the pace and do some things they aren’t comfortable doing,” McGee said. “As soon as we watched the tape from last week, we knew how close we were. We saw one block here, one tackle there — and it could have been a different outcome last week. Our guys attacked the week and handled the adversity with the weather, and they were rewarded for their efforts tonight.”

G’mone Wilson scrapped his way to 91 rushing yards on 25 carries that included an 8-yard touchdown in the first quarter that tied the game at 7.

Ja’Quan McMillian scored on a 37-yard screen pass from Jalen Ferguson and had a 1-yard touchdown run in the third quarter for the Titans, who also had three turnovers and nine penalties for 75 yards.

Kallai Bunya’s 10-yard touchdown pass from Gabriel Hollingsworth with 9:03 left pushed Reagan’s lead to 34-20. The Raiders defense forced a three-and-out on West’s next series despite starting the possession on the Reagan 46-yard line. Reagan sealed the win on Keandre Buyna’s interception with 3:18 left.

“They changed some fronts and that kind of mucked us up a little bit early,” Snow said. “We were able to run the ball a little better against them last week. We were able to move the ball, but we kept having those self-inflicted wounds. Those are things you can’t do against good football teams. Sad that it’s over.”

Snow also reflected on the season and the contributions of the 23 seniors during their careers.

“We’ll take away some great memories,” he said. “We got to go against a nationally ranked team (Oscar Smith in Virginia) and played well, we finished 8-4, and that’s not anything to really turn your nose down at. There weren’t a lot of expectations for this group coming into the season because we lost so much from last season. Nobody gave us much of a shot, but we believed in them and they believed in themselves. They just kept playing. The relationships you build in football, you can’t build those anywhere else. These relationships on the field are fortified in fire. And that’s what you take away from this team, this game, and this season.”