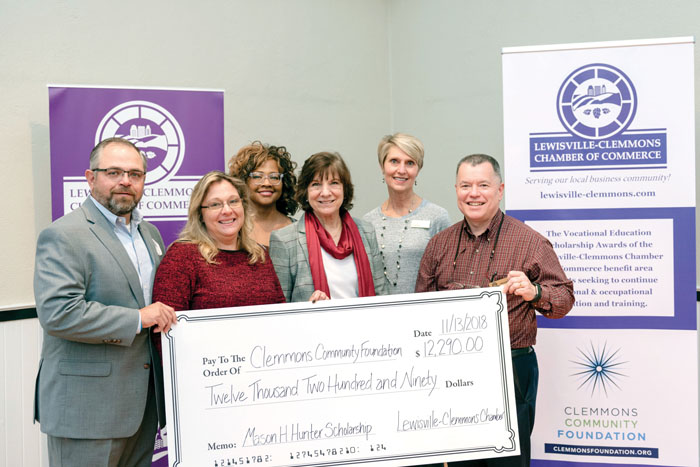 It is inspiring and energizing to see a community come together to make something good happen in the wake of a tragedy. This was the case when The Lewisville-Clemmons Chamber of Commerce held its monthly meeting on Nov. 13. Board President John Golden announced that a scholarship had been launched in honor of Mason Hunter, a Clemmons teen who passed away from an accidental drug overdose in March at the age of 17.

After his unexpected death, Golden wanted to make Mason’s dreams a possibility for other young people. Mason was considering a future as a chef or a career in law enforcement, and after Golden talked with Mason’s father, Brad, who is a fellow board member, an idea was born to initiate a scholarship in his son’s honor.

The scholarship is named the Mason H. Hunter Vocational Education Scholarship of the Lewisville-Clemmons Chamber of Commerce. As the name of this award suggests, this is not a typical scholarship. It is intended to encourage students who plan to pursue a trade or vocational path such as the ones that Mason was considering. The purpose of the scholarship is to help students graduate from a technical degree program and find a good-paying job in the local community. Recipients will be assigned a mentor to guide them in their career path. The scholarship award is for up to $2,500, and it can be used to cover tuition as well as books, tools and uniforms.

More than 100 local business and community leaders attended the luncheon on Nov. 13 where Golden began the meeting by saying, “This scholarship was just meant to be. When things like this happen, you always have to make something good come out of it. It’s all about hope.”

Brad Hunter followed Golden’s comments with his perspective on the loss of his son and how it resulted in the formation of the scholarship in his honor. “Everything we do is bigger than us. A one-time bad decision resulted in a terrible tragedy. Mason was affectionate and funny, and quick with a joke.” He briefly spoke again later in the meeting and said, “We live in a great area. We live in a great country. From the bottom of my heart, thank you,”

Regarding how the support that he and his wife Shauna received after their loss resulted in the formation of the scholarship, Brad remarked that “many friends talked to us about the burden of their children and concerns about their education and college debt.  Shauna and I never thought that our son would be memorialized with a scholarship. The sadness and grief will always exist, but it is a great honor for our son’s legacy to live on.”

Sandi Scannelli is the president/CEO of the Clemmons Community Foundation, and was involved with the LCCC Board in raising funds for the endowment of the scholarship. She praised the board for its commitment that resulted in a 100 percent participation of contributions from its members. “The enthusiasm and the commitment of the board to help young people stay in this community and thrive in this community has been inspiring. The energy of this board is contagious. It’s great to be a part of this energy.”

Ditra Miller, the executive director of the LCCC, offered her perspective on the practical benefits of the scholarship. “The biggest thing for me about this award is seeing students taking the next step from high school to college and not having the burden of student debt.”

Eric Rowles, a nationally recognized speaker and consultant, gave the keynote address at the LCCC luncheon, and the theme of his presentation summarized the work and the effort that went into the formation of the Mason H. Hunter Scholarship. He began his presentation by saying, “Service is the rent we pay to live here on earth.” His remarks were a fitting tribute to the many individuals who committed their time and donated money for the scholarship fund.

Your Neighbor: Giving back: Family gets involved with hospital…