After the Final Bell: Kyle Sapp excels as a musician and as an athlete 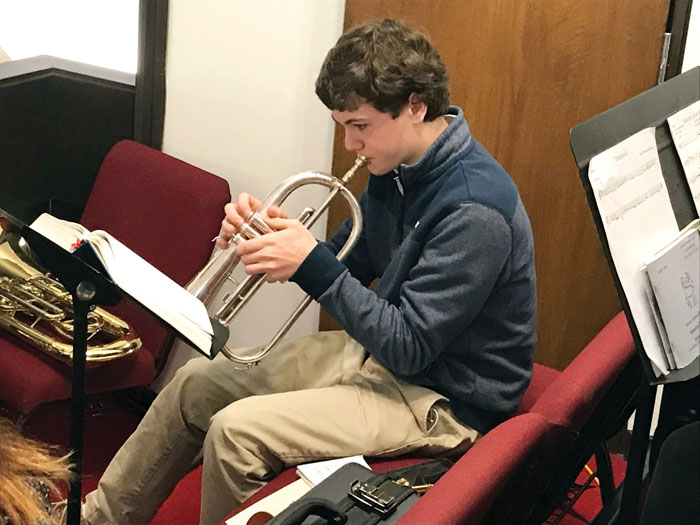 It is impressive for someone to have an exceptional talent in one aspect of their life, but a local teen is blessed to be quite talented as both a musician and as an athlete. Kyle Sapp, who is 15 and a freshman at West Forsyth High School, has excelled in both of these areas at a young age.

As a musician, he has both arranged and played music, and as an athlete, he has excelled as a baseball player. Growing up Moravian sparked his interest in music in the fourth grade. He began playing baseball at Southwest Little League at 6.

One of Kyle’s proudest moments as a musician came a few weeks ago on Sunday, Nov. 18, when a piece of music that he arranged was played by the orchestra at Bethabara Moravian Church where his family attends. It was a special day as the church celebrated its 265th anniversary, and the music was the highlight of an afternoon service to commemorate the event.   Kyle’s piece is titled, “Christ the Life of All the Living.”

It was the church’s pipe organ that inspired Kyle to write music. “Our organ was refurbished, and it gave me the inspiration to write,” he said.

Jeff Jones, who is the pastor at Bethabara Moravian, indicated that Kyle, as well as his two brothers Ian and Owen, are heavily involved in the music ministry at their church. Ian, the oldest, is a freshman at Appalachian State University. When he is home on breaks, he directs the orchestra. Owen, the youngest, is a seventh grader, and he plays the baritone in the orchestra.

When Kyle was asked about what motivated him to become involved with music, he said, “It makes me happy, and I like when it makes other people happy. It is a great stress reliever, and I guess I wanted to show my older brother that I could do it.”

His mother, Kristy is amazed by the musical talent of all three of her sons. “I love music, and it is my outlet, she said, “but they did not get this talent from me or their dad. It is truly a God-given talent. They are mostly self-taught.”

The musical celebration at Bethabara Moravian that involved the Sapp boys on Nov. 18 was a significant event in the life of the church. Not only did it celebrate the 265th year of the church’s existence, but Pastor Jones noted that “we are the reason Moravians are in North Carolina.” Bethabara Moravian, established in 1753, was the first Moravian church in our state.

Other than music, Kyle’s other passion and talent involves playing baseball. After playing for the Southwest Little League for several years, he and the teams that he has played for in the 12 year-old division and the 13-14 year-old division have had much success.

Two years ago, the all-star team that he played for in the 13-14 year-old division won the state championship for western North Carolina. They went on to play in the Southeast Regional at the national level where they were the runner-up.

Kyle has played the outfield and has pitched while playing organized baseball. He has been clocked throwing in the upper 70s as a pitcher which is an amazing speed for someone his age. He is planning to try out for the West Forsyth Junior Varsity team this spring with the hope of continuing his successful baseball career.

When he was asked how he manages his busy schedule that involves school work, music, and his involvement with baseball, Kyle offered a mature perspective for someone his age. “I try to balance things by doing everything day-to-day. Sometimes, you just have to do something even when you don’t want to do it.”

This young man certainly has an amazing future ahead of him.  Whether he continues to pursue music or baseball or both interests, he will likely have much success.