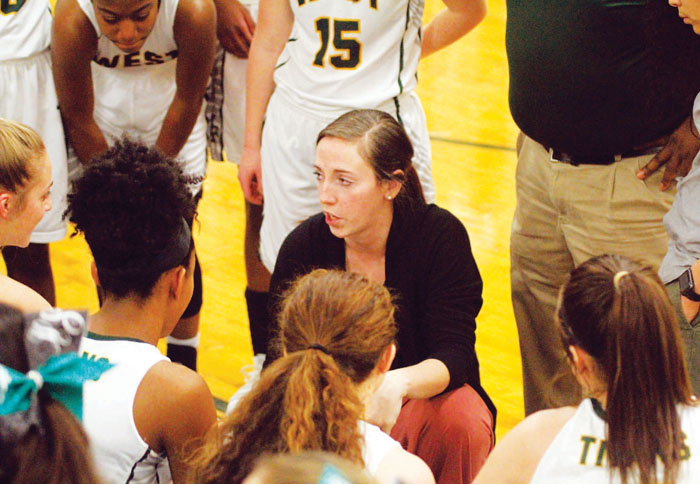 Year No. 4 of the Brittany Cox era heading the West Forsyth girl’s basketball program has already gotten off to a rousing beginning.
The Titans won the annual Mary Garber Class last week in relatively easy fashion, posting wins against West Stokes (71-46) in the first round, Reagan (68-34) in the semifinals, and Forbush (62-41) in the championship.
Expectations are high again for the Titans, who return a core nucleus of experience from a team that finished 24-4 last season and advanced to the semifinals of the 4-A Western Regional.
Cox’s teams have a combined record of 68-17 in her first three seasons at the helm, which includes winning Central Piedmont 4-A championships in two of those three years.
Not only has Cox continued the recent winning tradition of the program, she has put her stamp on establishing a successful culture.
“You lose kids every year because of graduation, you get new kids into the program, but you don’t lose culture,” Cox said. “You can always build on skills, but it’s harder to rebuild a culture every year. And what we have with this group is some great senior leadership. We’ve got great communication. We’ve got girls taking accountability for the mistakes — those are things that make me feel really good about where we are right now as a program. That’s the kind of culture you want in your program.”
Cox said that this year’s team will be a lot younger than in seasons past, but she has a lot of confidence in bringing the newcomers along because of the strength of her returning players.
“I think I’ve got four girls on the team that can drive (a car),” Cox said with a laugh. “We are learning every day and building that foundation for them. Our seniors and upperclassmen have been really great about communicating our expectations as well. I think this is my hardest working group since I’ve been here.”
Two of those seniors that Cox will rely on both on the court and off of it are point guard Callie Scheier, who has signed to play in college at High Point, and forward Destiny Griffin.
Both Griffin and Scheier have played varsity for four years. Griffin was named the Most Valuable Player of the Garber Tournament last week, while Scheier was named to the all-tournament team.
“Callie might be an even better of extension on the court of me than I even am,” Cox said. “Her influence on this team is immeasurable. She is probably the most competitive kid we have and pushes everyone. She’s been our starting point guard since she was a freshman. She definitely knows what I expect and does a great job of being our floor general. It’s so valuable to have someone on the floor like her.”
Griffin averaged 10.7 points and 6.4 rebounds per game as a junior, and Cox expects even bigger things this season.
“Destiny is one of nine siblings and is kind of our ‘momma bear,’” Cox said. “She’s one of the most selfless players I’ve ever coached. She’s very patient, but she’s a force, and may be our most versatile player. I could put her anywhere on the floor and she would contribute. She’s also competing on the indoor track team and holds some school records in the shot put and discus, so she is pulling double duty this winter.”
Brooke Shaffer, another senior that Cox described as an “all-star teammate”, has also been providing great leadership to the younger members of the team.
“All the girls love Brooke because of her positivity,” Cox said. “On our practice on Veterans Day, we buddied up our seniors or an upperclassman with one of our younger players for some team bonding,” That gives them a point person they can always go to for advice or if there is a problem and they need some extra help with anything. I’m really proud of how our leadership has evolved with that and how the underclassmen have taken to it.”
Cox said she is encouraged by the play of some of the newcomers to the program like Caroline Johnson, a 6-2 post player, as well as Jackie Futrell.
“Caroline is mainly a softball player, but she has done some good things so far,” Cox said. “And Jackie is a great defensive player who should provide a lot of energy off the bench. The Dwiggins sisters, Makenna and Madison, should also be a big part of what we do this year.”
Cox knows the conference schedule will once again be brutal.
“Glenn will be really good, and East Forsyth should be really improved with what they’ve got coming back,” she said. “Reagan lost a lot of players, but its JV team went undefeated last year. And Reynolds and Davie will be tough opponents as well, so we know our work is cut out for us. It will be a very competitive conference from top to bottom.”
And since the Titans have continued to take a step forward in the state playoffs each year with Cox at the helm, will that continue this season?
“Our main expectation is to get better every day,” Cox said. “We can’t get ahead of ourselves. Last year was a special season. We went the farthest in the state tourney since I got here, but none of us should compare last year to this year. We need to continue to get better. Our best basketball is in front of us, and as long as we leave every game knowing that we got better, we are headed in the right direction.”