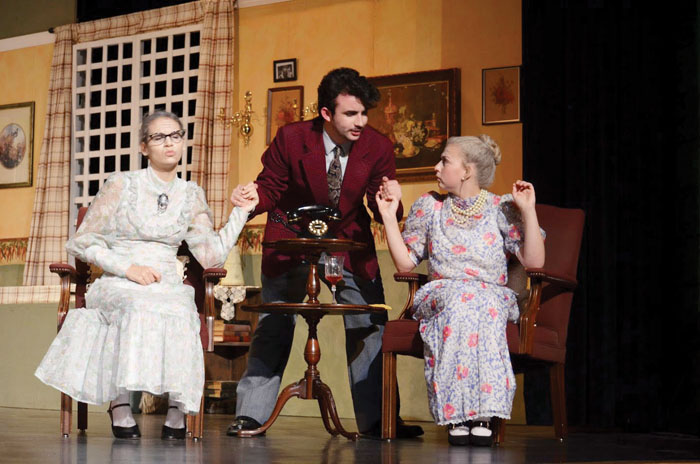 Talented, intelligent, and hard-working are adjectives that describe Grayson Fulp, a senior at West Forsyth High School. This impressive teenager was introduced to theater at age six and to Scouting in the second grade, and he has pursued both of these interests passionately throughout his youth.

Versatile is another adjective that applies to Grayson and his participation in theater as both an actor and as technician. As an eighth grader, he participated in an orientation program for rising freshmen at West called “Explore the Possibilities,” and he became intrigued by the drama program at the school. He enrolled as a ninth grader in the Theater I course as a prerequisite to Technical Theater, and this led to both acting and working on the tech crew in a number of shows at West.

As an actor, his two favorite roles have been parts that he has played in productions that took place last year when he was a junior.   The two roles could not have been more different as he played the part of Mortimer Brewster, a twenty-something young man, in “Arsenic and Old Lace” in the fall, and the part of Edna Turnblad, a middle-age mom, in “Hairspray” in a spring production.

When he played the role of Edna Turnblad, he had to wear heavy padding under his costume, as he was in the role of an overweight character as the mom to Tracy, the central character in Hairspray.

Grayson credits his low and powerful voice for much of his success in the roles that he has played. “It resonates well,” he said, and he believes that it has helped him to be selected for some lead roles.

Despite his passion for acting and the successes that he has had on stage, Grayson enjoys the behind-the-scenes role of being on the tech crew as much as he does acting. “If there is a show that he is not acting in, he does tech,” according to this mother Janet. He has always liked the role of directing lighting. “I especially enjoy lights, he said. “This is what I enjoy most about my role in tech.”

The highlight of Grayson’s career in theater occurred this past summer when he was selected to be a student in the prestigious six-week summer program at the Governor’s School West at Salem College. The brightest and most talented students in North Carolina are selected for this intensive program that helps students cultivate their interests in particular areas of study. Janet remarked that her son grew significantly as a person and as artist during his tenure at the Governor’s School. “There was no emphasis on grades,” she said. “It was totally about the process. This was a wonderful experience for him.”

While enrolled at the Governor’s School, Grayson took classes in a collegiate environment and performed in many productions that showcased several styles of theater. He worked collaboratively with theater students to write and perform several original plays. “It was the most incredible experience I’ve ever had,” he said. “It took everything I knew about theater and put it on its head, and added three layers to it.”

The final performance of the drama department at the Governor’s School was “Animal Farm” which is based on the legendary book written by George Orwell. It was open to the public and it was attended mostly by the parents and family members of the students.  “It should have been required viewing for everyone,” Janet remarked. “The lessons that can be learned from this production are incredible.”

In addition to the many years that Grayson has devoted to his career in theater, he has committed much of his life to Scouting, first as Cub Scout and later as a member of the Boy Scouts. During his involvement as a scout, he has been responsible for planning many events and meetings. He has also had several leadership roles including patrol leader, quartermaster, and senior patrol leader.

This fall, Grayson’s love for animals led to an idea for a project to earn the Eagle rank. After volunteering at the Forsyth Humane Society, he decided to repair and build dog beds for the shelter. Now that the project is completed, he has fulfilled his requirements for this highest rank in Scouting. He is awaiting his official Board of Review, and hopefully he will be recognized as an Eagle Scout at the beginning of next year.

As a student, Grayson has also enjoyed much success. He was enrolled in the HAG (Highly Academically Gifted) Program at Hanes Middle School, and at West Forsyth he has taken six advanced placement courses. As a senior this year, he is taking AP literature, AP calculus, and AP biology.

So how does this young man find the time to succeed in theater as both an actor and as a technician while also pursuing his Eagle Scout rank in addition to taking three AP classes? “Out of necessity, he has become so good at time management,” his mother remarked. “Also, his teachers at West work with him and give him some flexibility when his schedule becomes very busy.”

“It can be rough,” Grayson said about his schedule. “In my case, it’s not an inherent skill. You have to take advantage of every minute that you have. This means studying during rehearsals when there is down time.” He added that “participation in theater is the same as being in sports. If your grades are low, they will take you out.”

Not surprisingly, Grayson has applied to colleges that have a strong reputation for theater and drama. His top three choices are Yale University, Wake Forest and N.C. State.

Yale is his top choice not only because of what it has to offer in theater studies for an undergraduate, but also because it offers a master’s of fine arts in design that would include lighting. “If I can go to Yale,” he remarked, “I can go pretty far.” He is considering Wake Forest for its strong undergraduate program in theater, and he applied to N.C. State because of the interest that he has developed in the sciences while enrolled this year in AP biology. A double major in theater and biology is a possibility with the idea that a career in medicine would be a practical option if he does not pursue a career in theater.

Regardless of the path that he chooses, Grayson Fulp has an exciting future ahead of him. After he completes his senior year at West Forsyth, he will begin his undergraduate studies next fall at one of the schools where he has applied.