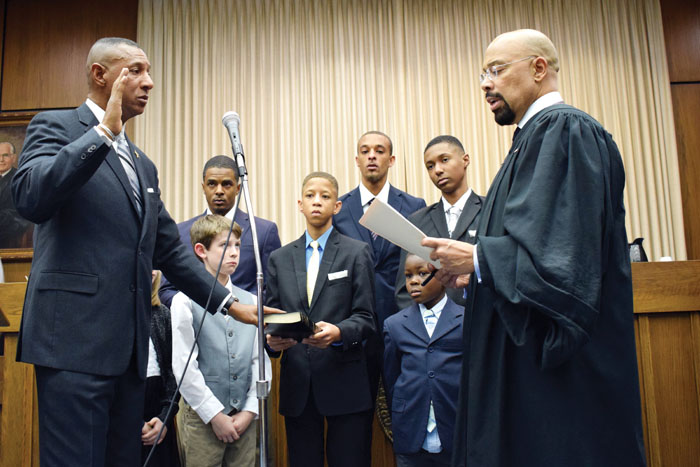 Bobby Kimbrough, Jr. takes his oath as sheriff during a swearing in ceremony at the Forsyth County Hall of Justice on Dec. 3. PHOTO CREDIT: Forsyth County Government

Bobby Kimbrough, Jr. became the county’s new sheriff during a ceremony held Dec. 3 at the Forsyth County Hall of Justice.

He was sworn in by Senior Resident Superior Court Judge Todd Burke in front of an overflow crowd. Five of Kimbrough’s seven sons, along with several of his “honorary children,” held the Bible as he took the oath and then his parents pinned his badge.

Kimbrough told attendees he will work hard as sheriff and listen to the people he serves.

“I will give you the best of me,” he said. “I want to include everyone in this county”

“One thing that I personally want to make sure we do is give him our full and unequivocal support because he’s going to need it,” Plyler said.

Kimbrough started in law enforcement in 1984 as a public safety officer for the city, which combined the duties of a police officer and firefighter. After that, he became an arson investigator and assistant fire marshal with the Winston-Salem Fire Department. In 1989, he began working with high-risk offenders in the N.C. Department of Probation and Parole. From 1995 to 2016, he served as special agent in the Drug Enforcement Administration (DEA), working extensively throughout the country. He was also a member of the Foreign Operations Group that functioned throughout the Caribbean.

He was elected this year as sheriff of Forsyth County and succeeds longtime Sheriff Bill Schatzman. Kimbrough is the first African American to ever hold this position.