Keeping up with Laila Jones 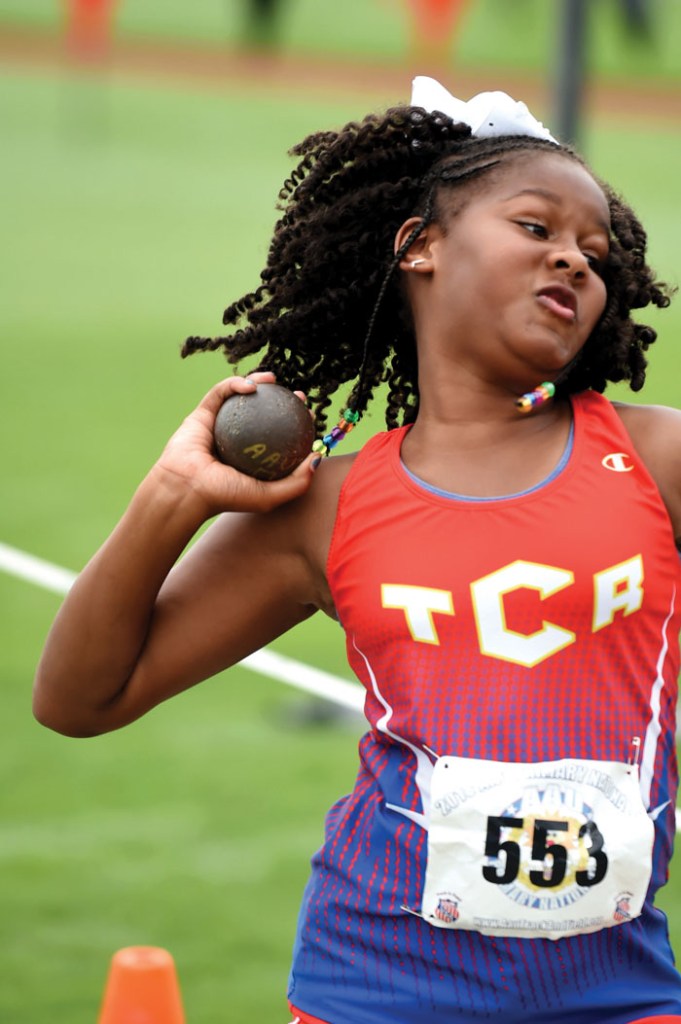 Laila Jones may just be getting started with her track and field career, but she has already accomplished so much.

Jones, who is 8, is a third grader at Clemmons Elementary School and is already a world-record holder in the shot put and has a host of All-American Honors and national records to her credit.

Yes, the round object that is made of various metals that gets heaved during track and field competitions and can weigh anywhere from 4 to 16 pounds.

How does someone that young — she started throwing the shot put when she was 5 — get started?

“Funny story,” said Hobart Jones, Laila’s father and part-time coach for Tri City Relays, her club team. “I was working with my son Hobart III, on his shot put, and every time he threw it, someone had to send it back. So, Laila told me she wanted to help do that and picked it up and chucked it back to me. And I just looked at her like ‘you shouldn’t be able to throw that thing back to me like that.’ And then she did it a few more times and I thought we may have something here.”

The shot put Laila was throwing back to her father and brother weighed six pounds, which turned out to be an advantage for her in competitions.

“We realized that when she did her first competition, she got to throw a four-pound shot put,” Hobart Jones said. “So, in the first meet she ever did, she was the state champion in the shot put competing against 6, 7, and 8 year olds. She was also named the state MVP during her first three years of competition.”

Jones didn’t stop there, accruing medals and records at plenty of subsequent meets. She broke the world record in the shot put for 7 year olds in February this year at JDL FastTrack with a throw of 24 feet, 10¾ inches, breaking the previous mark by a quarter of an inch that was previously held by Finland’s Milla Koski-Vahala.

She broke a total of seven national records at competitions last year, sometimes besting her own personal best to do so.

“I don’t think any of my friends at school really know about all my records,” Jones said. “I was really surprised when I found out I broke the record the first time. Then it kept happening and I was still kind of surprised. I love track and the competition and one day, I want to go to the Olympics.”

She broke two records in less than 24 hours over the summer, one at a meet in Greensboro at North Carolina A&T, the other coming in Des Moines, Iowa, at the AAU Junior Olympic games.

“She won in Greensboro, then we rushed to the airport to catch our flight to Iowa,” Hobart Jones said. “Our plane was delayed for five hours, so we ended up not getting to our hotel in Des Moines until about three in the morning. We left at 10 to go to the competition, just hoping for the best and she went out there and broke the national record. She broke two records in 24 hours.”

Jones said that she spends plenty of time watching YouTube clips of past track athletes to get inspiration. She mentions Wilma Rudolph and Jesse Owens and Usain Bolt as some of her favorites.

But her athletic interests don’t stop with track and field. She also enjoys playing basketball and golf and will eventually start playing volleyball once she gets a little older.

“I like track better because of the competition,” Jones said. “I usually practice my throws once a week, but we are getting ready to start going to twice a week. I practice a lot during the summer and try different events, like the sprints and long jump. I did the javelin in Florida this summer and that was fun. I can’t wait to try the high jump when I can.”