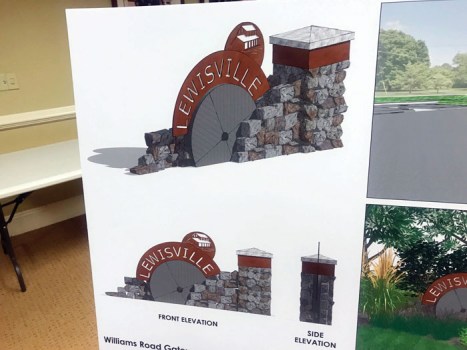 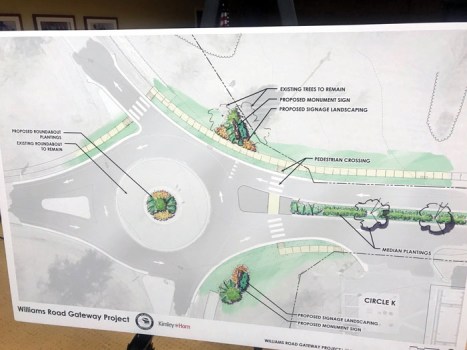 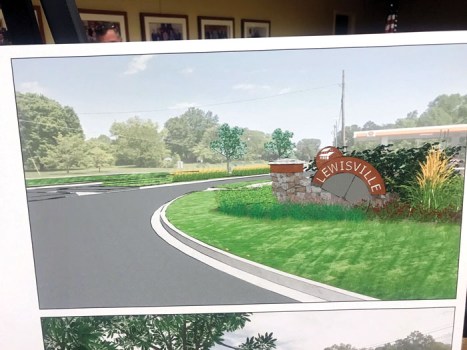 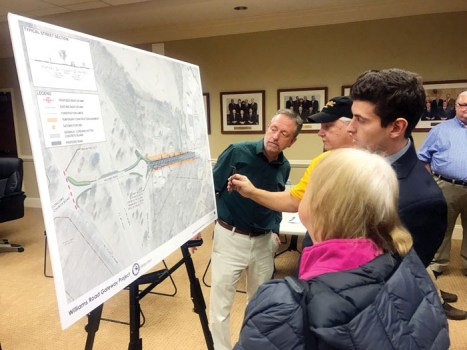 Coming off the main exit from the U.S. 421 North interchange into Lewisville, local officials have long envisioned a dramatic entrance into the town.

That wish is now closer to reality as Lewisville unveiled the Williams Road Gateway Project in a public meeting last Tuesday night at Town Hall.

The open house featured renderings of the preliminary project designs for the public to review and ask questions from representatives of project manager Kimley-Horn and NCDOT. Prior to the public meeting, there was a meeting with public officials, followed by one with advisory boards and committee members.

Town Manager Hank Perkins said that he and Kimley-Horn representatives received “very good feedback” regarding the project, which is being done in cooperation with NCDOT to make street improvements to Williams Road between the roundabout at Concord Church Road and the roundabout at Shallowford Road to create a gateway into the town.

“A lot of what we want to do in Lewisville is to create a very pedestrian feel, slow things down, be more rural in character, not a very urban developing area,” Perkins said of the project, which includes the following components:

• From Concord Church Road to the U.S. 421 North interchange roundabout, curb and gutter will be added along Williams Road.

• From the U.S. 421 North interchange roundabout to the roundabout at Shallowford Road, Williams Road will be widened to three lanes with curb and gutter and a median.

• Sidewalks will be added on both sides, with the western sidewalk connecting the sidewalk on the bridge to the roundabout at Concord Church Road.

• Landscaping will be included north of U.S. 421, including a gateway feature entering Lewisville from the highway.

The project is intended to improve mobility and access to the heart of Lewisville, including a median north of the roundabout as vehicles come off the U.S. 421 North interchange to help with conflicting traffic movements (left turns) along Williams Road headed to Shallowford Road to improve traffic flow, and the addition of sidewalks connecting the area around Concord Church Road to the existing sidewalks on Shallowford Road.

Perkins said that the project calls for the stretch of Williams Road — coming from the U.S. 421 North interchange roundabout — to be expanded to a three-lane profile with 14-foot multi-purpose lanes on each side of an 11-foot planted median to accommodate vehicles and bicycles. It will also include curb and gutter, sidewalks on both sides, and pedestrian lights and landscaping.

“Instead of trying to segregate it into a vehicle travel lane and a dedicated bike lane, the 14 foot is an established DOT width for a multi-use lane and trying to accommodate both,” Perkins said.

He said the conceptual plan is about 25 percent complete, and that comments of initial concern after last Tuesday’s meetings included the dangers of the close proximity of the crosswalk near Circle K and some components of the median.

However, Perkins did say: “I don’t think you’re going to see a left-hand turn into the Circle K” on Williams Road coming from the Shallowford Road roundabout and that motorists would have to proceed through the U.S. 421 North interchange roundabout back to convenience store.

As for the timeline for the project, which has an estimated cost of $1.5 million, right-of-way acquisition is scheduled from Spring 2019 to Fall 2019 and construction slated from Winter 2020 to Summer 2020. This is a project utilizing federal STP-DA funds with 80 percent of the expected costs coming from federal aid and a 20 percent local match of close to $300,000.

Perkins said that what the town was able to do with the new Williams Road bridge in 2015 — with distinctive architectural features, including decorative stone walls, painted railings and two medallions engraved with the town seal on either side of the bridge, going well beyond the plans designed by the NCDOT — was the starting point for the gateway project.

He hopes the town can continue the theme with similar entrances to Lewisville from other roads in the future to provide “a unified look and feel.”