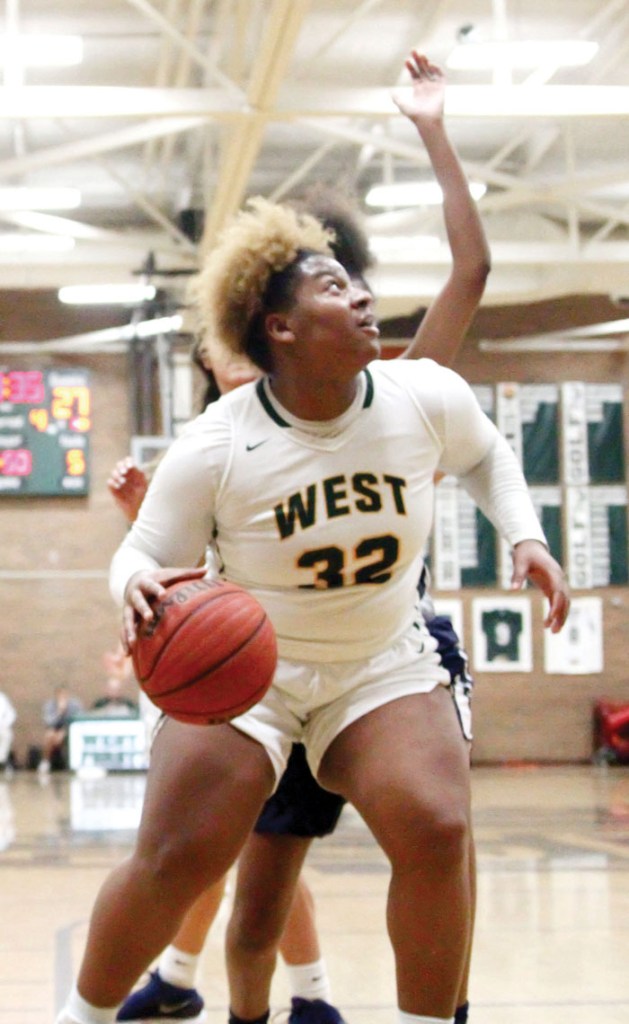 Destiny Griffin is once again pulling off the winter sports double for West Forsyth this season.

Griffin, a senior, stars on the basketball court and in indoor track for the Titans, where she is an accomplished shot putter that is currently ranked No. 1 in North Carolina and No. 2 in the country. At a recent meet at JDL FastTrack, Griffin set a new personal record in the shot put with a throw of 39 feet, 8 inches.

Fatigue isn’t really an option for Griffin, who also helps take care of her nine siblings every morning before school and every night once she gets home from basketball and indoor track practice, where she pulls double duty on a regular basis, every afternoon, and holds down a part-time job.

“We call her ‘Mama Bear’ for a reason,” said Brittany Cox, Griffin’s basketball coach. “She has so much patience and is the type of kid that everyone flocks to because of her personality. She’s a one of a kind kid who is very laid back, yet very competitive. And she’s still learning how good she can be.”

As far as Griffin is concerned, her efforts on the home front all come naturally.

“I’m usually awake at 7 a.m. and then I make sure everyone else is up, gets something to eat, and is getting ready for school until my mom gets home from work and takes them,” said Griffin, a four-year varsity player for the Titans. “My mom works three jobs, and one of them is third shift. My dad also works third shift, so when I get home from practice, I make sure all my brothers and sisters have eaten, did their homework, get their baths, and then get them off to sleep. We all have a really close bond. I think this where my patience comes from, though.”

Griffin said that basketball is her first love, but she knows that track is her ticket to college. She’s garnering attention from East Carolina, UNC Charlotte, Western Carolina, and N.C. State, among others.

“I started track back in sixth grade with Next Level Track Club,” Griffin said. “I thought I wanted to be a runner but saw them working out and thought better of it. And my coach, Buddy Hayes, told me he had something else he wanted me to try and handed me a shot put and told me to throw it. It made my arm really sore at first, but it was something that I thought I could be pretty good at and stayed with it. I enjoy the shot put more because it requires more strength, and discus requires more technique and footwork.”

“I kept telling her I wanted to be like her, so I started playing basketball,” Griffin said. “It was an instant love affair as soon as I started playing, and now, I’m in my fourth year playing varsity and it’s been a blast. I treat all of my teammates like I would my own family.”

Cox has seen Griffin flourish during her career and knows that there is still untapped potential.

“When she was a freshman, she had all the tools necessary to be successful, and she was, just in a reserved way,” Cox said. “She knew how good she could be, but it scared her at times. It was just a matter of reminding her of how good she was. Last year is when she really hit her stride and had all the girls looking up to her. She started seeing her influence on the team on the court and in the locker room, which has really carried over to this season. A big piece of what makes her so special is that she will do anything to make the team better.”

In addition to finishing out her senior season strong on the hardwood — the Titans are 5-0 and have won every game in convincing fashion — Griffin also wants to leave her mark in track. She finished fourth in both the discus and the shot put at the NCHSAA 4-A state meet last spring and was third in the 4-A indoor state meet in February.

“My grandmother wants to see me go to the Olympics” Griffin said. “We’ll see what Jesus has planned for me.”