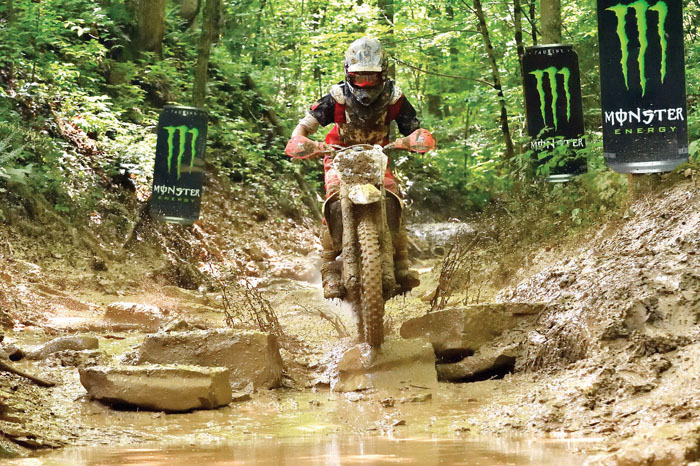 Bolton Beroth on a track during a competition. Photo by Ken Hill. 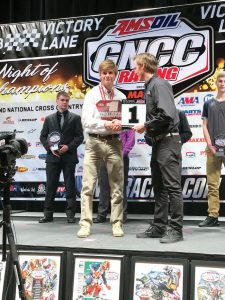 Most three-year-olds are still riding with training wheels. But not Bolton Beroth. He raced his first dirt bike at the raw age of three. “The point of the pewee race is to ride around with other kids,” says Bolton.

Bolton’s godfather, Buster Yarborough, was the one who got Bolton into racing. Buster had helped raise Bolton’s father, Walter. Walter raced and therefore, his two sons began to compete as well. Both Bolton and his older brother, Alex, started out in smaller series, known as the North Carolina Hare Scramble (NCHSA). “Hare scrambles are like cross country running but on a dirt track.” Bolton rides anywhere from eight to 14 miles around fields and woods. It can be rough terrain, wet, muddy, and sometimes dangerous. But Bolton loves the thrill.

In 2012, when Bolton was 11, his parents, Walter and Kathy, agreed to let their boys start racing in the national series, which is known as the Grand National Cross Country (GNCC). “When you go from state to national, everything is a step up. There are more people. The national tracks are tougher and longer. You race for three hours,” explains Bolton. At first, Bolton raced on the youth tracks because he was not old enough to race on the adult tracks. In order to race on the adult tracks, the rider must be 13. Although, most wait until they are much older. But not Bolton. He started racing in the adult league as soon as he became a teenager.

Of course, as a young teenager, Bolton played other sports as well. He played basketball and football at Summit School. Bolton admits he got hurt more during football than in racing and that he has only had one broken bone. “I broke that bone when I was playing dodgeball at school. My worst injury racing was when I was four and I burnt my arm a little bit.” Clearly that did not deter Bolton.

Once high school hit, Bolton knew sports would kick into high gear, plus his studies were important to him. So Bolton had to decide whether he wanted to commit his time to racing or other sports as well. He chose his bikes. Racing requires extreme self-discipline. He has to practice five days a week on a dirt track. He does not have a coach but will occasionally train with one in South Carolina to work on technique. After riding for an hour or so, Bolton hits the gym. “People don’t understand you have to be in shape to race for three hours. I wore my watch one time during a race and saw I burned 2,000 calories in just one race. People think the motor does all the work but it is not that simple.”

Bolton clearly made the right decision because he has taken off in the dirt bike world. He has roughly 10 sponsors supporting him who take notice during each race. The way race levels are divided is C, B, A, and then professional. There are classes within each letter. So Bolton began at the B level, more specifically 200 B when on the national circuit. “200 B is the bike size.” Last year, at 15 years old, Bolton won the championship. Therefore, he decided to move up to the A class. “I knew the A class was going to be tough and I didn’t expect to win this year. I thought I would figure out A class this year and work on championships next year.”

But guess what? Bolton won the GNCC in A class at the young age of 17. “The way the national series works is there are 13 races and your best nine count. My first race in South Carolina, I finished fourth. I expected to be around there the whole season. Then I went to Florida for the second race and basically led the whole race and won. Once I did that, I knew I had a chance. The rest of the season, I only had two wins, but consistency is what wins championships.” His consistency paid off.

Now it is obvious that riding professionally is feasible for Bolton. Therefore, he and his parents are trying to find a college that is conducive to his riding schedule. Bolton has proven that his grades and riding are a priority. He is required to be in class on Monday mornings and therefore, it is not uncommon for Bolton to be driving back with his father through the night in order to be back in class at 8 a.m. before the bell rings. Bolton is currently taking three AP classes and wants to continue to achieve high grades in academics and more wins in his sport.

“The way it works is anyone can sign up to go pro, but you have to be at a certain level. I will race 250 A. The level of competition is a little higher. Depending on how I do next year, I could stay there or go pro. We have been discussing where I am going to go to college and how I am going to go to college. So I would have to go to a college where I could keep riding,” says Bolton. The humble champion also adds, “I could not do any of this without the support of others. I want to thank everyone who has helped me get here, prayed for me, and worked with me.”

As Gandhi said, “There are two kinds of people, those who do the work and those who take the credit. Try to be in the first group; there is less competition there.” Our neighbor is living proof that the harder one works, the luckier one gets.