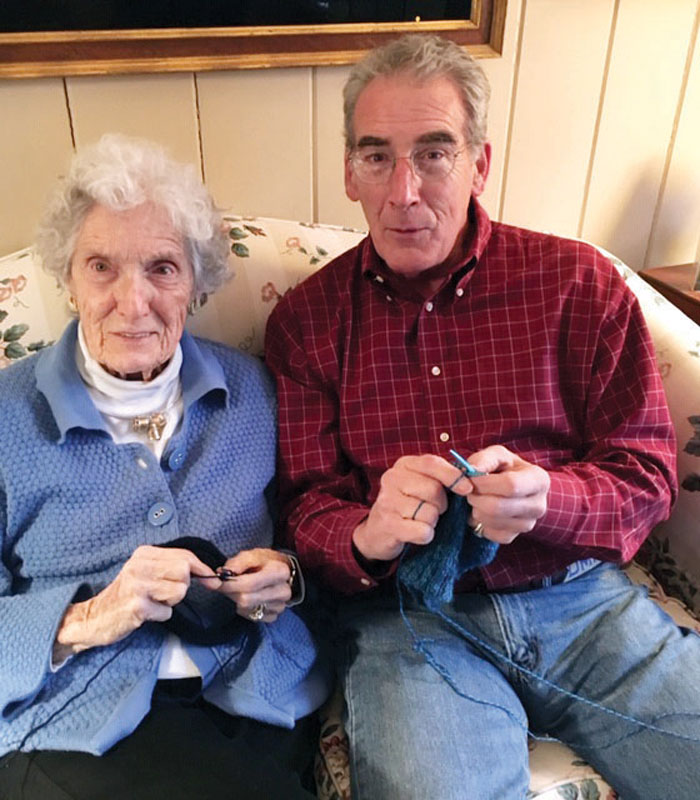 Anne Rutter and her son, David

Anne Rutter and her son, David, just received a letter from a patient undergoing chemotherapy treatment at the oncology department in Winston-Salem. In the letter, the lady was grateful for the person who had knitted a wool hat. She said, “I feel a lot of love coming from that hat.”

The two people who took hours to knit the hats were Anne and David. After they were completed, David walked into the Derrick L Davis Cancer Center in Winston and asked the greeter if he and his mother could donate the hats to chemo patients. The greeter gladly accepted.

“Knitting is very relaxing. Now that I give away what I knit, it is even better,” smiles. Anne. Mrs. Rutter was taught how to knit by her mother-in-law. “She would knit hats and socks for relatives,” says Anne. “Then, she made baby jackets and gave them away. That gave me the spirit of giving. I have never forgotten that. I still have the information on how to make the baby jackets.”

Anne taught her three sons how to knit. So when David’s elementary classes were challenged to support various recycling projects, David and his brothers began knitting squares.

“The school was really ahead of the times in recycling,” notes David. “But you got points for various projects. We would make coasters. The knitting of the squares was a big deal.”

“The boys would knit the squares and I knitted all the squares together to make into a blanket,” adds Anne.

“As I recall, those blankets were given to the hospitals,” says David. “That was the start for me with giving and helping people without getting any kudos for doing it.”

Throughout the years, Anne has knitted hats and given them to relatives. She always tells them, “If you don’t want them, donate them to the oncology department at your hospital.” Anne would also give hats to a woman she worked with. The woman would then give the hats to her daughter, a nurse, who would donate the hats to the hospital. David joined in on the efforts.

“We both,” David says, “recognize it is such a better feeling to give and not be recognized for it. It is a heartfelt way of giving back to the community.” David says he gets the same feeling when volunteering at Habitat for Humanity.

Knitting for the both mother and son is extremely relaxing. In fact, you won’t find either traveling without their needles and wool yarn in tote. Knit One Smock Too is the store where David gets their yarn. Anne said the ladies slipped directions in on how to make hats with various sizes, including for premature babies.

“But what we have found out, is that there is a greater need for hats for adults,” Anne acknowledges. Getting a letter back from one of the adult patients was an added holiday treat. “It was wonderful. I already had a wonderful feeling after donating. The thank you note was very nice,” says Anne.

“The letter says the patient feels a lot of love coming from that hat,” adds David. “That really hits the core of giving back.”