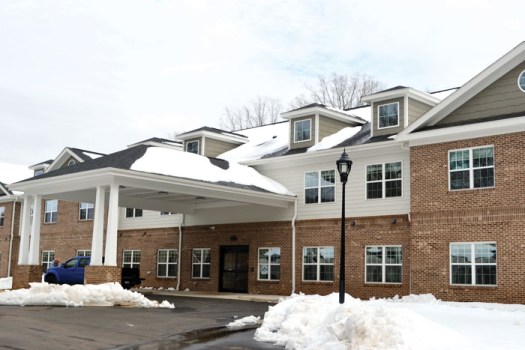 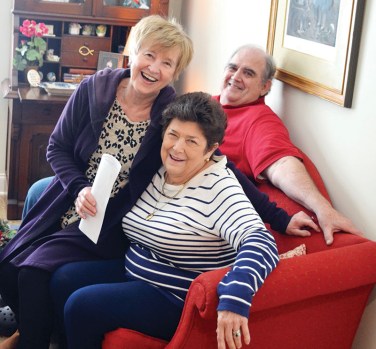 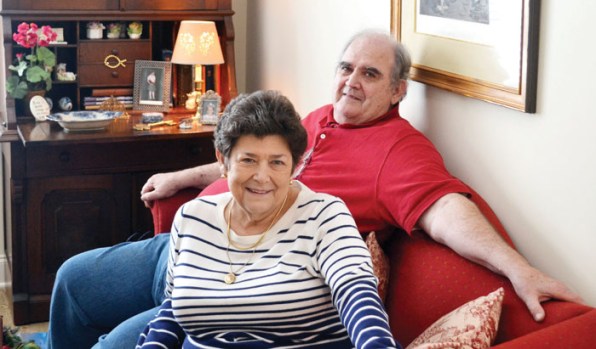 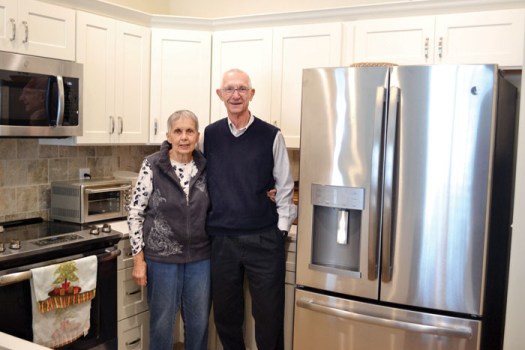 Fred and Charlotte Voreh moved into their new residence a few weeks ago as two of the first residents to occupy Trinity Elms Apartments in Clemmons. The apartment complex is one of three parts of a beautiful campus that also includes a health and rehab center and an assisted living community. Although they are just settling into their new place, the couple who has been married for 61 years are delighted with their new accommodations. “Overall, we are very happy here,” Fred remarked. “This is the place to be.”

The Trinity Elms campus is located on Fair Oaks drive off Harper Road near I-40 in Clemmons. The Assisted Living Complex was built in 1998 and the Health and Rehabilitation Center was added four years ago. The apartment complex opened a few weeks ago, and it includes 54 units. Twenty-seven units are already committed, and the Vorehs are one of 13 residents who have moved in so far.

The apartments range from 686 to 1,001 square feet and feature fully equipped kitchens and include washer/dryer hookups.   The monthly rental fee includes internet, housekeeping services every other week, maintenance, landscaping, trash pick-up, and the use of a large community building. The fee also includes access to a physician who will make regularly scheduled visits. Various meal plans are available, and there is some flexibility as to how many meals can be ordered each month.

Trinity Elms is operated by Lutheran Services Carolina. Katie Scarvey is the communication specialist for this non-profit organization that provides skilled nursing care, rehabilitation, assisted living and retirement options to seniors. She noted that the Trinity Elms apartments are a good value for a new complex. “This is a more affordable option than many other options,” she said. The most significant financial advantage to Trinity Elms is that residents do not have to buy into a program with a significant upfront investment. Instead, they sign a monthly lease agreement.

One-bedroom and two-bedroom units are available, and the rental rates range from $1,700 to $2,250 monthly. Renters must be at least 62 years old, and they will be able to enjoy many of the benefits of campus living, including participating in various events and activities.

As was the case with Fred and Charlotte Voreh, Richard and Linda Bovender also moved into their new apartment earlier this month. Both couples noted that they have “come full circle” during their lives in terms of where they have lived. Fred and Charlotte rented an apartment after they married and then built and lived in several houses and then moved to a townhome before deciding to settle at Trinity Elms. Richard and Linda, who have been married for 53 years, have downsized from a five-acre farm to a house to a 1,001 square foot apartment. Despite the drastic changes from these moves, Linda remarked that “our 1,001 square feet seems spacious. The ceilings are high, and we have plenty of room. Our apartment is so sunny and light.”

For both couples the primary motivation for moving to Trinity Elms was being near their children who live in the area. “Our sons have enough burdens of their own,” Charlotte said. She noted that Fred recently had a significant health scare, and the two of them wanted to be as independent as possible without having to rely too heavily on their sons. They also remarked that the location has easy access to Winston-Salem and the local hospitals and that some medical needs can be met on the campus since the site includes the Health and Rehab Center and access to a physician who makes regular visits.

Frandee Nichols is the director of independent living and oversees the apartment complex. She recently transferred to this position after serving as the director of assistant living for 13 years. The Vorehs and the Bovenders both had wonderful things to say about Frandee and the entire staff at Trinity Elms. Linda Bovender commented on how Frandee always finds the time to accommodate the new residents despite her busy schedule. “She has so much on her plate, but you would never know it,” she commented. “It’s like going to visit someone, and you feel welcomed immediately.”

All four of the new residents had similar feelings for the rest of the staff at the new complex. Richard commented that “From the cleaning staff to maintenance to Frandee, everyone’s been great. Everyone has made us feel so welcome.”

Lutheran Services, which runs a similar retirement community in Salisbury called Trinity Oaks, was originally contacted about managing Trinity Elms. A local developer owned the land and planned to build the complex in Clemmons, but eventually decided to contact Lutheran Services about building the complex rather than just managing it. The final phase that includes the apartments has made the campus into a complete community for seniors that meets virtually all of their needs.

Richard Bovender remarked that church friends had highly recommended Trinity Elms when he and Linda began considering where to live after selling their house. “Several people that we know had been to the rehab facilities here and spoke highly of it,” he said. “I am convinced that God sent us here.”