Your Neighbor: ‘I asked for it:” Dancer Sam Shapiro takes a chance and gets on the world stage 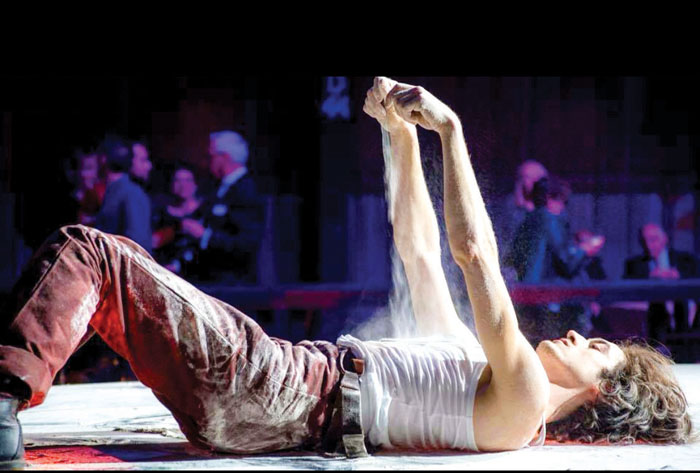 Sam Shapiro during a performance.

With Nutcracker season in full force, no one knows the art of dancing in such a show as Sam Shapiro does. While he has danced in multiple Nutcracker shows, his life’s tale is almost grander than the show itself.

At age 11, Sam was cast in a local performance because they were in need of another boy dancer. Sam discovered he enjoyed the art. He began training in classical dance with his mother, Brantly Shapiro, at Wake Forest University. He also entered North Carolina School of the Arts.

By the time Sam was 17, he performed a stunt perhaps only a teenager might conduct. “I snuck my way into a dance competition in New York. We were all warming up and once everyone took off their warm-ups, I realized everyone had a number but me,” Sam says. Still, the young man continued to dance with the large group. Finally, a gentleman came up to Sam and inquired about the situation. “I asked if he could just give me an audition. I finished the class and it turns out the gentleman was the associate director of the Royal Ballet’s Upper School in London. He said if I was interested, they would love to have me.”

At 17, Sam packed his bags and moved across the ocean. Being the only American at the school, Sam felt as though he had to represent his country well. He roomed with a German and Chinese student. While the boys’ grandfathers likely fought each other in past wars, the young men were now dancing the same language on the stage. By Sam’s third year, the students were understudies of the professional royal productions. They would have small parts in various productions as they watched the professional dancers steal the show.

However, one day, one of the lead male dancers got injured. The director came up to third-year students and asked the boys who knew the part. Ostensibly, no student knew the part. The man asked again. Who knew the part well enough to dance it in the production? “I was not going to let him ask twice,” Sam says even though he didn’t know the part. “I was the only one to raise my hand. The director walked me up to the front of the stage and put his arm around my shoulder and said, ‘Look, I know you don’t know the part. But we will help you.’” So, for the last three months of his last year at school, Sam was on tour dancing side by side a professional 35-year-old female. “It was bittersweet. All my friends were together for the last months but I had an opportunity to dance in places like Turkey, Spain and New York.”

Boston was also a leg of the tour. Instantly falling in love with the beautiful Boston studio, Sam asked the director of the Boston company if his performance could be his audition. The director agreed and after seeing Sam, offered him a job. After Sam’s tour was up, Sam left Europe and headed back to Boston.

In Massachusetts, Sam was working on Nutcracker rehearsals. It was his third week in the company. While walking home in the historical theatre district, a guy suddenly pulled a gun on Sam. “I was just in the wrong place at the wrong time. He pulls a gun on me and shoots me in the stomach. I had come out of all this training, gotten an apartment — it was a total turn.”

During the moment, Sam tried to run to a safe place. He had called his girlfriend at the time and asked her to call 911. “You are running away to save yourself but your body starts to shut down in stages. Your vision starts to go. Your hearing starts to go. Your legs feel like noodles.” Sam walked up to his girlfriend’s apartment. Her parents were in town visiting and the girl’s father was very calm and helpful while waiting for the ambulance. The bullet had gone through Sam’s liver and was lodged in his kidney, so he needed all the help he could get.

“The ambulance ride was just like you see in the movies. You are looking straight up at the lights,” Sam said. “They are trying to keep you awake.” When he was rushed into the emergency room, Sam asked the surgeon if he was going to die. The surgeon assured him he was not. The surgeon did, however, have to cut Sam open from his chest down to his stomach. He was closed up with staples. The recovery in the hospital was far from peaceful.

“I was in ICU at Boston Med. They are a great hospital because they saved my life, but it is in the middle of downtown Boston. There are three people to a room. The guy beside me was in a really bad motorcycle accident and was in a lot of pain. I didn’t get much rest.” Sam also noted the nurses were quite stringent because they wanted to move people out of the ICU to make room for others.

Once he could go home, Sam went back home to North Carolina for his therapy. But 10 weeks later, he was performing in the Boston Nutcracker. Sam danced in Boston for two years. He also had the opportunity to dance in places like Cincinnati and New Zealand. But eventually, Sam was ready to slow down his dancing career and come back to where his art had all begun.

In North Carolina, Sam focused on dance education. He became trained as a teacher and teaches in the afternoons with kids from the ages of six to 12. During the day, Sam works on his urban farm. “I wanted accessibility to fresh food. Once you taste fresh food, you realize how bad the food is at the grocery store. You realize how old the vegetables are and soft the fruit is.” Sam’s farm is named Apple and Green City Farm. It is an independent farm that is community supported. Sam sells some of his products to local restaurants, but also donates to food banks and neighbors.

Sam says one lesson he has learned along his incredible career is the importance of asking for opportunities. “Anything I have ever gotten in life was because I asked for it.” Our neighbor is a great example of if you don’t ask, you don’t get. Sometimes having a little moxie goes a long way.