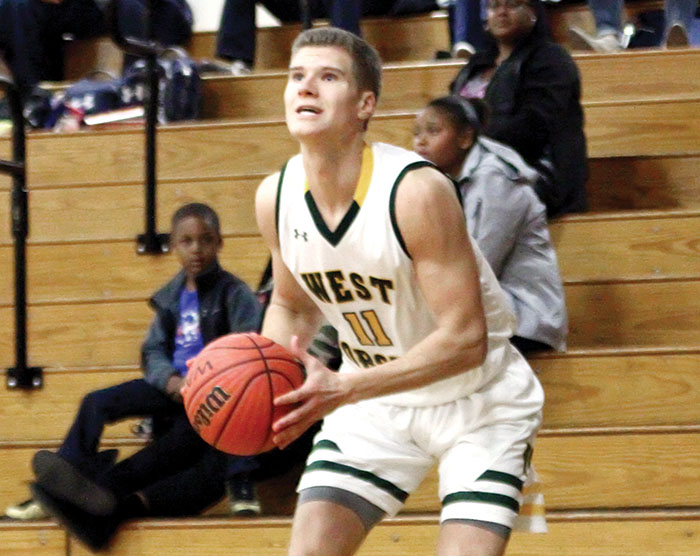 Ryan Ayers has packed a lot of basketball knowledge into his three-year career on the varsity team at West Forsyth. He had already absorbed plenty of knowledge leading up to high school by devoting a lot of his childhood to the game.

“I think I started playing when I was around 3,” said Ayers, a senior for the Titans. “My dad, Dwayne, played in college at Gardner-Webb and he taught me a lot when I was growing up. I was always around basketball, always watching basketball. He got me into it and I’ve loved it ever since.”

Ayers is also loving his senior season with the Titans and new coach Howard West despite the team’s sluggish start to the season.

The 6-foot, 5-inch Ayers had a breakout game last week against Ragsdale in an overtime loss, pouring in 25 points and grabbing 14 rebounds in a performance West knew was coming.

“He’s learning how to be a complete player,” West said. “He took a huge step towards in that Ragsdale game. He had great shot selection and put up a tremendous rebounding performance, offensively and defensively. Whenever he gets a good look, he usually makes it. He’s adjusting to a new system and some new philosophies but understands the game really well.”

Ayers dabbled in football and played quarterback at Reagan on the junior varsity team during his freshman year. He transferred to West Forsyth for his sophomore year after his family completed their move to Clemmons.

“My brother was at Reagan when I was a freshman, so I would just ride to school with him,” Ayers said. “Once we got settled into our new house, West was a lot closer and it just made more sense.”

Ayers made the varsity team as a sophomore at West and saw limited playing time. However, he took that in stride and saw the opportunity to improve as a player.

“Every practice we had that year was so intense,” Ayers said. “It was a real blessing for me to be a part of that team. I got to practice against a team of Forsyth County all-stars every day. Guys like Justin McCluney, K.J. Henry, Cooper and Maverick LaRue, Ben Uloko — every practice was like playing a game for me. There was so much energy every day. So much intensity. It really helped me become a better player.”

That team won the Frank Spencer Holiday Classic in 2016 and the Central Piedmont 4-A Conference championship.

Ayers became a starter as a junior and was the Titans’ leading scorer, but the team was plagued by injuries and had a disappointing finish.

Ayers knows things will only get better for his senior season.

“It’s been fun so far, even though we haven’t gotten off to the best start,” Ayers said. “We’re still young, we’ve got a new coaching staff, and I think everyone is doing a good job of finding their role on this team, finding their niche. We are all starting to buy in to everything. We know we’ve got a great coach and we are adjusting to the process. I feel like our best basketball is ahead of us.”

Ayers and the Titans (0-7) are ready for this week’s Frank Spencer Holiday Classic. The team is still searching for its first win and drew the No. 7 seed in the Myers Tire Bracket and played No. 2 Mount Tabor in the first round. The Titans had previously lost to the Spartans in both matchups this season heading into the Spencer.

“Winning the Spencer my sophomore year was a really awesome moment,” Ayers said. “We love playing on Wake Forest’s home court. It’s a great environment and an honor and privilege to play there. I hope we get to play more than one game there. I know we are looking forward to it.”

He sees this year’s tournament as an opportunity to continue to evolve with his team.

“We just have to keep getting better at what we are doing,” West said. “We are doing some good stuff and I’m seeing some positive signs. It’s just a matter of executing when the lights come on and the clock is on. Once we find that knack, then all the secrets to winning fall in place for you.”

“Everything we want to win is still out there for us,” West said. “This is an opportunity for us to continue to grow. It’s always a great event for the kids, and we will use this time to continue to prepare and get better.”